the loss of forgetting
by Douglas Messerli
Chris Marker (writer and director) Sans Soleil (Sunless) / 1983
Ostensibly a documentary performed as a kind of random travelogue—scenes were filmed in Japan, Guinea-Bissau, Iceland, Paris, and San Francisco—Chris Marker’s Sunless is a collage of images from Japanese films and television, stock footage, and stolen clips from films as well an newly filmed scenes from a silent film camera as an exercise, in part, to juxtapose behavior by playing time against place. Indeed the film opens with two quotes, the first by Racine, “The distance between countries compensates somewhat for the excessive closeness of time” and a quotation from T. S. Eliot’s Ash Wednesday: “Because I know that time is always time / And place is always and only place / And what is actual only for one time / And only for one place.” 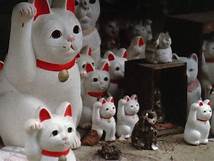 Marker’s film, accordingly, is a kind melancholy and slightly nostalgic study of time and memory (the title is taken from song cycle by the Russian composer Modest Mussorgsky).

As the film’s narrator relates the travels of fictitious cameraman Sandor Krasna, he emphasizes what Marker obviously sees as the dilemmas of being unable to remember:

I will have spent my life trying to understand the function

of remembering, which is not the opposite of forgetting,

but rather its lining. We do not remember. We rewrite

memory much as history is rewritten. How can

Without memory, moreover, how can we understand and comprehend global histories; how can we come know our fellow man? The traveler’s method, therefore, is not explore what we think we know but the banal aspects of life.

He liked the fragility of those moments suspended in time.

Those memories whose only function had been to leave behind

nothing but memories. He wrote:

still interests me. On this trip I’ve tracked it with the relentlessness

of a bounty hunter. At dawn we’ll be in Tokyo.

The result of this search for banality often produces fascinating information and connections as the film focuses on the beauty of children on an Iceland road, on the powerful women of Guinea-Bissau, and on a shrine for cats in Japan. Some of the narrator’s comments are in fact quite profound and succeed in revealing new layers of the disparate cultures the film explores.

At other times, however, Marker’s narrative reminds me a bit of the often hackneyed and clichéd notions of culture that we have seen in French theorists who talk of the entire US in terms of Los Angeles and Las Vegas in vague overstatements that have little to do with the reality of those places, let alone the whole country. In short, Marker’s narrator often finds profound ideas in what might be quite meaningless to the cultures themselves, reminding me a bit also of the late 19th  and early 20th century European and American “orientalism,” a fascination with anything that seemed different, without the ability of those “orientalists” to put the images upon which they focused in proper context. Marker’s film often makes large claims for the banal activities he explores. For example, his observation of Japanese horror movies—“Japanese horror movies have the cunning beauty of certain corpses.”—may be an absolutely legitimate conclusion, but one would like to know how he has come to this conclusion and where it leads. Time and again, Marker’s narrator settles of such seemingly profound generalities without explaining their meaning or significance in the whole.

Of course, this also creates a kind of poetic quality to the work which brings it, at times a evocative power. And perhaps the focus on the small acts and odd components of a society may better help to make us remember, bringing us closer the filmmaker’s goal of creating a “loss of forgetting.” But at times Sunless is so dark and vague, that it becomes hard to even know where we have been, let alone to remember the place.