—Why suddenly this unrest and this confusion,
(The faces how grave they have become).
Why are the streets and squares emptying so rapidly
and everyone so pensively returning to their homes?

Because it’s night already and no barbarians have arrived.
And some people came from the frontiers,
and said that barbarians don’t exist any more.

And now what shall we become without barbarians.
These people were some kind of a solution.

Constantine Cavafy
—Translated from the Greek by Nanos Valaoritis
Rémy, a Quebecois Canadian in his 60s, is dying of cancer, and his ex-wife, Louise, calls her son, Sébastian, who lives in London, to return to help her. Our first glimpse of the sick patient is of a man faced with the end of everything—of his life, his beliefs—even the welfare hospital system for which he voted, as seemingly hundreds of patients suffer their stay in the hospital corridors. He and his friends, we soon discover, are of the generation who came of age in the 1960s, and lived their lives with a strong sense of purpose, filled as they were with high sentiments regarding their pleasure in the intellect, books, food, wine, friendship and sex; but they were also a hedonistic generation—my own generation—perhaps the last group born within a particular decade that might be described as having a deep generational kinship. 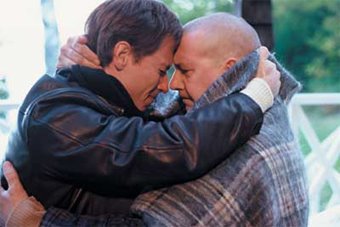 Like many people his age, Rémy is distressed with the generations that have followed, represented by individuals like his son who make fabulous salaries, but live hollow lives, symbolized by their attachment to video games and various electronic gadgets. Late in the movie, Rémy and his friends humorously list the various causes which they momentarily embraced—at one time or another espousing the values of Separatists, Existentialists, Marxists, Troskyites, Situationists, Deconstructions, etc. None of these movements and value systems were sustained, but they represent for the individuals of that period a search for values in which the younger barbarians—as Rémy and some of his friends perceive their offspring—have no understanding or interest.

One of the most rewarding themes of this film—a film which gloriously embraces multiple views of life—is the sense of love and continuity among these older individuals, despite their recognition of one another’s failures and, at times, even betrayal.

In contrast Sébastian and his fiancée Gaëlle have little understanding of “love,” a word they believe has destroyed thousands of useful and valuable relationships; each in their own way, the younger figures of this film—Sébastian, his sister Sylvaine, Gaëlle, and Nathalie—act alone and
are cut off from one another, isolated in highly efficient acts of financial attainment and self-destruction.

Sébastian works with banks to broker financial transactions, and of all the characters in the film is the most competent in attaining what he seeks. The problem, quite obviously, is the value of that attainment. No sooner has he arrived in Montreal than he is able to broker a deal—oiled with large sums of money— between the formidable hospital bureaucracy and the equally hard-nosed unions to set up a room for his father in a currently unused (presumably for lack of funds) section of the hospital. It is he who brings the group of his father’s and mother’s friends together. When Rémy, a former history professor, complains of his quick dismissal from the university, Sébastian pays students to briefly attend his father’s deathbed. Told that heroin will relieve his father’s suffering, he goes in search of the drug, uncovering the drug-addicted daughter of one of his father’s former lovers. Later, when the beautiful addict is found to have overdosed, he is able to convince her—unlike her mother and friends—to undergo Methadone treatment. When his father speaks of his stay at a cottage by the lake as representing one of the most beautiful times of his life, Sébastian arranges for his father and friends to spend their last days there together. Somehow he convinces even the religiously minded nurse to provide him with the drugs needed to painlessly end his father’s life.


His wife, an art appraiser, performs in one of the most poignant scenes in the movie, when she is forced to tell the regional church officer that the religious objects and icons that all once held so dear are worthless in the art market. 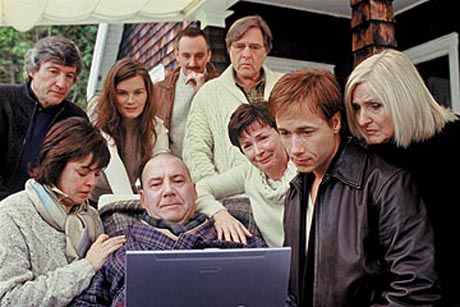 Sébastian’s sister, Sylvaine, who works as a sailor delivering new ships to wealthy customers around the world, cannot even be there for her father’s death.

In short, each of these figures is quite capable of accomplishing his or her goals, but in relationship to the far more spectacular failings of their parents, they seem nearly lifeless, sleepwalking through their lives without wonderment and joy.

Writer and director Arcand, however, makes it apparent through what is basically an extended series of tableaus that it is the parents and the selfishness of their passionate involvement with living that may have left their often ignored children so incapable of expressing or experiencing love. Or perhaps it is simply that the expression of love for these younger figures is not the same emphatic, melodramatic expressions of pleasures employed by the older generation. Perhaps the pleasures themselves have changed—or even the evaluation of those pleasures. As Rémy and the others face the end of their lives, they generally note that much of their sexual drive has dissipated; the dying man is unable even to join them in their final feast of scrambled eggs with cavier and fresh truffles. Most importantly, despite their determined efforts to embrace pleasure, they too must finally come to terms with the horrors of the previous century and the post-9/11 world of the present. In the end, Rémy is distressed that, despite all his ideals, he has done nothing of importance for the human race.

On the other hand, just as the nurse has urged him to do, Sébastian physically embraces his father, demonstrating his love of the man who has spent much of his life verbally abusing him; later, as Sébastian arranges for the drug-addicted girl Nathalie to stay at his father’s apartment, she awkwardly leans forward with a kiss. Can this “barbarian” generation recover the passion of living despite themselves? Arcand does not attempt to answer the question

In may be, as Cavafy warned us, there are no barbarians at the city’s gate, or that the barbarians will never arrive because they were they here all the time; they were ourselves.

Posted by greenintegerblog at 8:30 AM