George Stevens | The More the Merrier

full steam ahead!
by Douglas Messerli 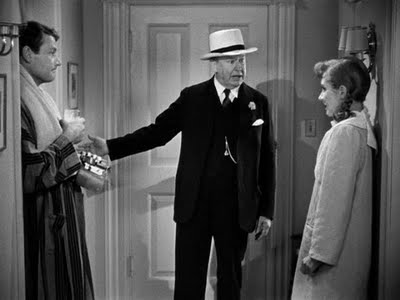 The preposterous “hero” of George Stevens’ slightly offbeat wartime comedy, The More the Merrier, is Benjamin Dingle (played by the noted character comedian Charles Coborn), a figure who believes—like Captain Farragut of Civil War History that life should be lived by “damning the torpedoes” and moving “full steam ahead” —steams through this comedy at such a terrifying trajectory that he almost succeeds at putting all the other characters under water.  Fortunately, the other two leading characters, Constance Milligan (the incomparable Jean Arthur) and Joe Carter (the affable and laid-back matinee idol of this period, Joel McCrea) are good swimmers, standing up to his bullying tactics with surprisingly strong tactics of survival.


Arriving in the war time capitol of the USA as an advisor on the housing shortage two days early, Dingle finds his hotel suite unavailable, the following discussion, typical of his bullying tactics, following:


The early-late motif is played out for all of its possibilities throughout the film, as the metaphor is extended not only to time schedules but personal relationships.


What can such a determined speedster do but to find a newspaper add offering an apartment room, and claim it for himself against a mob of other good intentioned prospectors? A single woman, Constance Milligan, has decided to sacrifice her two bedroom apartment by sharing it, but before she can even become involved in the rental decision, Dingle has sent all the others home and declared himself, despite her protests that she is determined to have a woman tenant, her new roommate.


Constance Milligan: …I’ve made up my mind to rent to
nobody but a woman.
Dingle: So, let me ask you something. Would I ever want
to wear your stockings?
Constance: No.
Dingle: Well, all right. Would I ever want to borrow your
girdle, or your red and yellow dancing slippers?
Constance: Of course not.
Dingle: Well, any woman, no matter who, would insist
upon borrowing that dress you got on right now. You know
why? Because it’s so pretty.
Constance: I made it myself.
Dingle: And how would you like it if she spilled a cocktail
all over it…at a party you couldn’t go with her to because
she had borrowed it to to it…in?


Before the poor Miss Milligan can even answer, he’s flipped a coin and won. He’s in.


But she, in turn, presents him with an impossible time schedule for their bathroom and kitchen use in the morning, an instant by instant determination of everything from their awakening to their bathroom habits and their eating patterns—an impossibly intricate interweaving of two individuals that is doomed to failure, and which punishes poor Dingle by leaving outside the apartment door in his pajamas.


In part to retaliate, but also just out of his impetuous personality, he leases his half of the room to Sergeant Joe Carter (Joel McCrea) who has no place to stay as he waits to be shipped overseas. Obviously, the action leads to even greater friction between Dingle and Milligan, and, ultimately, when he reads her diary she has accidently left out in a rain storm, ends in his ouster. But, just as any perceptive viewer might have guessed, it also leads to romance between Miss Milligan and Carter.


The only difficulty between these two from their former tenant is that they are not nearly as eager and determined to act. Milligan is engaged to a high-paid bureaucrat, Charles J. Pendergast (Richard Gaines), who even by his name we know is not suitable for her breathy, down-to-earth sensuality. And when Dingle is forced to deal with Pendergast at a luncheon he dislikes him the moment he sees him, again interceding, perceiving that Joe would be a far better match.


When Joe is arrested, due to the good boy intercession of a teenage neighbor, for being a Japanese spy, Miss Milligan is forced to testify in Carter’s behalf, but a reporter haunts the couple and they, to avoid scandal, are forced to marry (through Dingle’s nefarious suggestion)—temporarily—with plans for an annulment. Returning to the apartment, however, the two discuss their predicament through the separating walls, before coming to realize that they truly love one another. So does Dingle, the retired millionaire, speed on, having swept away of another couple of unsuspecting passersby, who are now quite capable of swimming on their own. “Full steam ahead!” 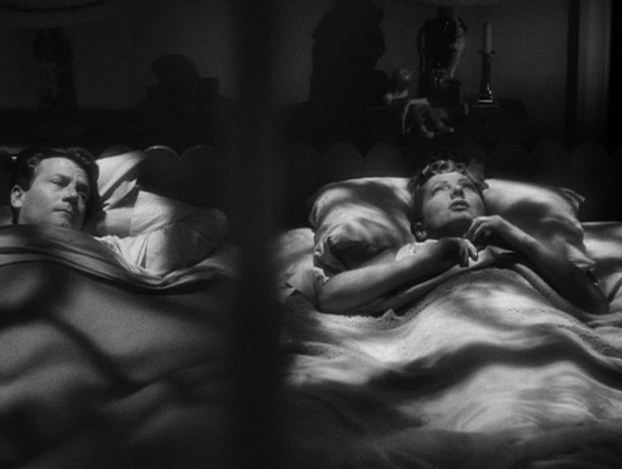 If this comedy is not quite as hilarious as it wishes itself to be, and if its predictability sometimes interferes with the screwball antics it would like to emulate, Stevens’ film still provides a great deal of pleasure, mostly due to Jean Arthur’s comic acting performed with a voice pitched between improvident prudence and a petulant purring that is nearly impossible to resist. Despite the bland appeal of McCrea, he is just handsome enough that we desire him to fall into the abyss that any “dingle” (the word meaning a small, deep, concealed dell) might have lured the two into. Finally, the communal manner of living the movie espouses is perhaps the closest American cinema ever got to a concept of social(ist) or group love before the late 1960s, as the intrusive camera moves, like another household guest, winds in and out of walls and windows, assuring the apartment's tenants little privacy. But then Washington, D.C., in this topsy-turvy wartime world, is somewhat like living in a vast dormitory. Men and women encamp at night in hallways. And a simple visit to a night club leads Joe Carter, in this male-depleted society, to have to fend off an entire room of swooning women. Marriage is clearly the only thing two people can do without others.