an honest man
by Douglas Messerli


Preston Sturges’ Hail the Conquering Hero is one of his very finest comedies—which given the quality of most of his work is very high praise indeed. And, although nearly all his films are grounded in American culture, in its presentation of patriotic marines and small-town character types, it perhaps his most American work.


That is not to say that what Sturges shows us about American life is always positive. Small town boy Woodrow Lafayette Pershing Truesmith (Eddie Bracken) is son of a Marine Corps hero father, “Hinky Dinky” Truesmith, who died a hero in World War I. The widow and mother of Woodrow (Georgia Caine) even keeps a shrine for her dead husband in her living room. The son, accordingly, has grown up with the lore of Marine Corps life and is determined to become a hero himself. The only problem is his chronic hay fever, for which he has been drummed out of the Corps. In utter embarrassment and depression, he has stayed in San Diego, working at shipyard, afraid to return home. 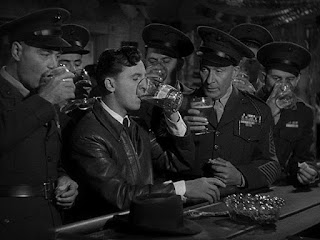 In a local bar, Woodrow coincidentally runs into a group of down-and-out Marines who have just spent their last dime. Treating them to a round of beers and sandwiches, Woodrow and the soldiers strike up a conversation wherein he reveals his situation. The eldest of the men, Sgt. Heppelfinger (the wonderful William Demarest) has even served with “Hinky Dinky” in World War I, recalling his heroic acts. While they speak, one of the soldiers, missing his own family, scolds Woodrow for not returning home and puts through a call to Woodrow’s mother so that he might tell her the truth. Regretfully, Woodrow reveals he will be returning home but in the bad telephone connection his admission of having “hay fever” is comprehended in the Truesmith kitchen as “jungle fever,” which leads his mother to believe he has been released as a kind of hero, having suffered in a battle. The whole event is even more complicated when Heppelfinger jumps on the line declaring Woodrow is a hero! Before the despairing ex-soldier has he comprehended the immensity of the Sergeant’s lie, he is bundled away by the soldiers onto a train, forced to redress in his uniform and awarded a couple of their medals, temporarily, so that he can return home proudly to his hometown. 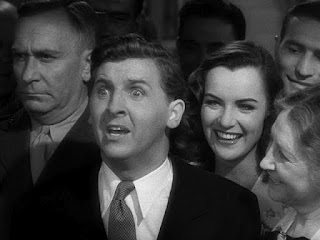 What no one might have imagined is that the whole town, with three bands in tow, have turned out to celebrate their war hero’s return. The blustery and fraudulent mayor (Raymond Walburn) has a speech in hand and Woodrow’s former girlfriend, Libby (Ella Raines), now a fiancée of the mayor’s handsome but bland son (Bill Edwards), determines to keep her new relationship a secret for a while so as not to spoil Woodrow's celebrated return.


With great cornball hoopla, bands play, a young girl gives her memorized speech, and the mayor blusters forward as Woodrow is carried through the streets in absolute horror for the series of out-of-control deceptions and their consequences. At every attempt to speak out, however, his Marine friends jump forward to silence him, leaving Bracken with little to say other than his representing his growing fears in a permanently-popeyed and dyspeptic look. A statue is planned, his mother’s remaining mortgage paid, each kindness further terrorizing the former truth-teller, while town citizens determine to draft him into running against the current mayor! It is a world gone mad, a community so desperate for heroes that the good and ordinary are seem as meaningless. Even Woodrow’s attempt to bolt is prevented by the protecting army of friends. Pretending to give into the demands to appear at a campaign rally, Woodrow confesses everything, returning home to pack with Libby trailing after, breaking off with her obedient beau and promising to run away with Woodrow, her former love.


The stunned crowd is left in the always capable counterfeiting hands of Sgt. Heppelfinger, who praises Woodrow’s true courage in confessing the truth, which convinces the hypocritical citizens that Woodrow does indeed have the qualities they want from a mayor, drawing him back into fold before he can escape!


Sgt. Heppelfinger: [after Woodrow reveals his discharge and leaves
the auditorium] I just wanna tell you one thing, see.
I've seen a lot of brave men in my life—that's my
business. But what that kid just done took real
courage.


Sturges hardly misses a single aspect of American small-town hypocrisy: the mother’s embracement of the dead, the lover’s disloyalty, the mayor’s puffed-up chicanery, the soldiers' absolute delight in their own outrageous fables, even the church-goers disingenuous love of their fellow flock (only after believing Woodrow is a hero do they help his penniless mother). In short Sturges presents a small town world we all know from tales as vastly different as Tilbury Town, Winesburg, Ohio, and River City, Iowa, towns in which ordinary people are only too ready to buy into fraudulent myths of American desire.