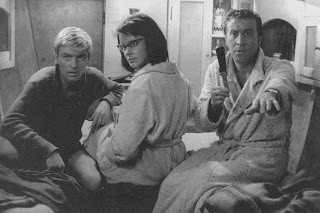 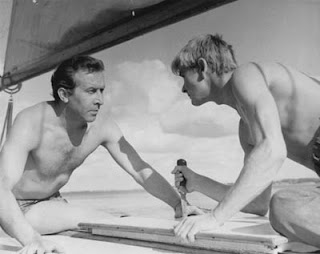 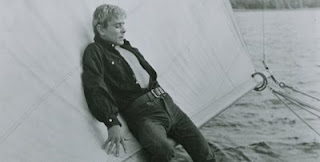 Tension is perhaps the operative word in describing Roman Polanski's 1962 amazing debut film, Knife in the Water. From the first scene in the film, where Andrzej and Krystyna are driving down an unpaved lane on their way to a boating trip, to the last image of the car at a crossroad, Andrzej undecided upon which direction to take, the movie permeates a sense of dread—sexual anxiety and fear of death.


In that first scene, with Krystyna at the wheel of their car, Andrzej criticizes her driving; she stops the car as they silently exchange positions. We know already, accordingly, that this married couple is inured to each other's assaults, and we recognize that their relationship will be a subject of the narrative.


Soon after, the couple encounters a young boy (the only name he is given in the credits) standing in the middle of the road, refusing to budge in his attempt to catch a ride. In anger for the boy's position, Andrzej swears and drives unnecessarily close the hitchhiker before stopping the car. In a pattern that will be repeated throughout the film, he chastises and dismisses the young man before taking him into the back seat, a situation, obviously, similar to the abusive relationship between him and his wife.


They arrive at the harbor that holds their small skiff, seemingly happy to rid themselves of their unwanted guest. But when the young boy begins to leave them, Andrzej calls him back, inviting him to join their overnight excursion. The young man demurs; he is a hiker, a man of the woods (he later declares he cannot swim). But the older man challenges him further, and the dare is taken up. We know now that the film will center upon the tension between the two, upon Andrzej's attempts to outperform the younger man, the young boy's fearless actions wrapped up in his youthful good looks.


Of course Andrzej has taken in the younger man precisely to prove that, despite his age, he is still a virile being, worthy of his younger, attractive wife. And a great deal of the movie is taken up in the intense detail of the couple's actions as they take the boat out of harbor, prepare lunch and dinner, raise the sails and lower them, etc. They are a team, like a well-oiled machine, who work perfectly together. And their actions are clearly meant to educate (for Andrzej at least) the young innocent in their midst.


However, what doesn't get discussed in the reviews and essays I have read, is that not only is Andrzej attempting to prove his marital rights, but that he is also sexually attracted to the young boy, and many of the dares they toss to one another are homoerotic flirtations. The fixation of the young man upon his hunting knife and his skill in using it is clearly a symbol of male virility (and all sexual implications that emanate from that). There is something almost pathetic about Andrzej's attempt to imitate the young man's game of quickly maneuvering the knife between his fingers in stabs against the wooden floor of the boat. Compared to the young man, he is slow and awkward. When the boy easily scampers up to the top of the mainsail it is as if he were putting on display, like some sort wild beast, his lithe, muscled body.


Andrzej, on the other hand, perfectly at home in the boat, relishes the discomfort of the younger being who encounters a voyage that seems anything but a pleasurable day trip. Throughout the movie, the trio is forced to pull the boat—almost like a scene out of The African Queen—through swampy rush-covered spots, float it in a frozen barren of windless space, and rudder the craft through storm-laden skies. When, in a sudden squall, they pull the boat into a small haven for the night, retreating to the cramped quarters below deck, we are certain that the psychological battles in which the males have been engaged will spill over into literal violence. A pesky mosquito attacking the young man's face reinforces that sensation.


But Polanski takes the sexual attractions of the trio even further as they play a game of pick-up sticks in which the loser of each round must surrender an item upon his body. Andrzej, a master of this entertainment, loses nothing, while Krystyna loses a shoe, and the young boy temporarily loses his shirt and his beloved knife.

At sunrise, as the young man and Krystyna sit upon the deck, the predicted violence erupts, Andrzej having pocketed the young man's knife and desperate to reclaim his sexual virility, reveals that he has the taken the weapon, daring the young man to come forward and "get" it. When the handsome boy, himself a vision of the knife on the water, attempts to do so, the knife falls into the lake, Andrzej pushing the young man unto a rig that juts over the water, as the boy follows the path of his treasured "tool."


Before they can even take stock, they have lost sight of the man, Krystyna declaring that Andrzej has killed him! Both Krystna and Andrzej attempt to discover his body, but are unable to do so: the young man, hangs on a nearby buoy, diving beneath it as they search all sides of the object.


It is Krystyna now who expresses her anger and frustration. Both men are boys, she declares, playing some absurd game for her affections. Disgusted—and fearful—for the consequences of their sport she vents her rage against her husband. Furiously, Andrzej swims away, also disappearing from sight, and she is left alone, the only stable being, and the only one able to soberly return their boat to port.


The young man, who evidently can swim, if somewhat awkwardly, returns to the boat, as Krystyna now berates him for his own version of swagger, clearly emanating from his bitterness of his poverty-stricken youth, and challenging what, for him, appears as a class difference (few Polish people in those days owned cars, let alone boats; Andrzej is a university professor). Krystyna, however, sets him straight: that, in truth, he is no different from them, that they have had to endure the same difficulties, privations which she straight-forwardly lists. In short, the young man is himself is a future Andrzej. The skiff that has circled in its movements throughout the day has been a journey for Andrzej into the past, for the boy into the hidden world that lies ahead.


At the moment, however, the young man (played by Zygmunt Malanowicz, who later appeared in over 30 films) is so stunningly beautiful that her attraction to him is nearly uncontrollable. The two release that tension through sex.


Entering to harbor, the boy escaping to shore before she docks, Krystyna greets Andrzej. Immediately they return to their patterned ways of life as they close up the boat and return to their car, he insisting that he will go to the police. When she finally admits that the boy swam back to the boat, he refuses to believe her, suggesting that it is she who is terrified of facing the truth. Denying this, she admits that she has had sex with the boy. Andrzej rejects her statements as a cover. Yet as their car reaches the fork in the road where they will turn either to the police station or home, Andrzej stops the automobile, clearly unable to make a decision. The camera pans away from them, their car remaining in place as the screen blackens. Either he must face his own criminal behavior or the new future with which she has presented him.