Based on true life adventures of the Peruvian rubber baron, Carlos Fitzcarrald, Werner Herzog’s epic opera tale is almost overwhelmed by its own back story. In real life, Fitzcarrald bought a parcel of rubber trees straddling the Ucayali River which was unreachable because of dangerous rapids, but set off upstream on the Pachitea River, a secondary Amazon tributary, that flowed only several hundred meters beyond the Ucalian river, where he dismantled his 30 ton ship, carrying it with natives over the mountain, whereupon he set it up again. In Herzog’s film, the director used a 320-ton steamer, linking it to pulleys while steaming uphill over the mountain to the second tributary—a nearly impossible task which brought Herzog to describe himself as the “Conquistador of the Useless.”


The original Fitzcarraldo was to be played by Jason Robards, with Mick Jagger as a secondary character, but Robards fell ill from dysentery and was able to complete the project and Jagger left the venture for a tour with the Rolling Stones, forcing Herzog to start over filming from the beginning, this time with the irascible and self-destructive Klaus Kinski, who some natives seriously offered to kill if Herzog would agree to it. Torrents of rain, mud, insects, snakes and the simple logistics of the journey nearly did the entire crew in, and three of the six involved with the shooting were injured in the ship’s free-fall crashes through the rapids.


By comparison, the film’s events, beautifully filled by cinematographer Thomas Mauch, look more like a picnic. But, obviously, the real turmoil of the shooting is what helps to make the film so monumental. When the film’s dangerous Amazonia natives threaten the ship and its denizens, we realize that the actor-natives were, in fact, playing out some of their hate of Kinski.


Fitzcarraldo, quite simply, represents the acts of a madman, the character simply standing in for the mad machinations of the director. A failure in his last business venture, the creation of Trans-Andrean railways, the dreamer hero finds himself in the backwater town of Iqauitos, in love with the local beauty, Molly (Claudia Cardinale), the owner of the town’s successful brothel. His only other cohorts are the several village children, who love his offers of free ice, and a pig. But Fitzcarraldo has a love even greater than that his love of the pig, children, and Molly: he is enthralled with opera, particularly with the singing of Enrico Caruso, and he is determined to bring Caruso to Iquitos to in sing a newly constructed opera house. The film begins with a hurried journey to another Peruvian city via a small rowboat, with Molly in hand, to see Caruso—a trip that has taken him several days and has resulted in lacerations of his hand. The couple does not even have a ticket to the gala event, which is nearly over by the time they reach the opera house, but they find a way to wheedle themselves in for the final moments of the opera and tell the opera house manager of their plans to build such a grand palace in Iqauitos.


The opera house manager and the citizens of Iquitos perceive Fitzcarraldo for what he is, a kind of lunatic. But, we realize along with Molly, that it is often the unconquerable spirits of such truly crazed individuals who accomplish what might never otherwise be. And Molly, clearly in love with her crazy suitor is willing to bankroll is rubber land venture and helps him to buy the huge boat. Fitzcarraldo, along with an experienced, if slightly near-sighted Captain (Paul Hittscher) even manages to gather a crew, including the wily but traitorous Cholo (Migues Ángel Fuentes) and a perpetually drunken cook, Huerequeque (Huerequeque Enrique Bohórquez), who insists on two women assistant chefs. The other men he finds for the trip are tough sailors, all fairly handy with guns and aware of the dangers of the trip. 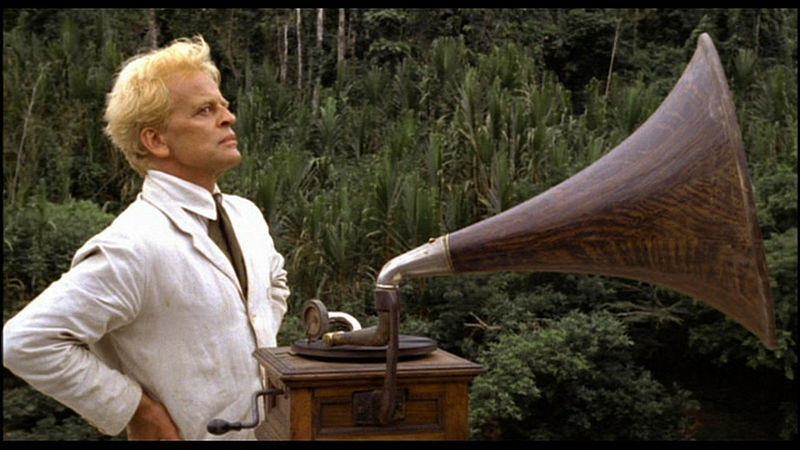 None of them, however, know of Fitzcarraldo’s mad schemes, and become disoriented the minute he begins their voyage moving off in the wrong direction on the wrong river. Dissention immediately arises but is eventually quelled with the firing of some men and the two women cooks, that is until they reach the region of the  unfriendly native tribes who inhabit the jungle, and have previously killed and beheaded missionaries and other would-be travelers. The eerie voyage through the native territory, where they are met by a strange babble of noises, is so unnerving to the sailors that they mutiny, leaving the boat with only Fitzcarraldo, the Captain, Cholo, and the cook to continue.


The unstoppable Fitzcarraldo, however, offers his increasingly hostile enemies the only thing he has to give: his operatic love, playing out Caruso’s voice on his wind-up gramophone, which so awes the pipe-playing natives that, as they close in, they not only allow the men to live but feed them and sign themselves on to the trip.
They continue upstream with good cheer until they discover Fitzcarraldo’s insane plan to move the ship over the mountain. But even here, the audacity of the event elicits their help, until the ship falls backwards down the slippery hill, killing one of their own. The natives disappear, but eventually return, clearly with some reservations. When Huerequeque suggests they use the boat’s engine along with the pulleys, however, the trip up the mountains resumes, miraculously ending with the boat slipping down, like a thirsty elephant, into the Pachitea. A drunken celebration follows, at which the boat’s original crew members pass out. Late in the night the head of the natives cuts the boat’s securing rope to appease the river gods, sending it downstream in a mad fall into the rapids. 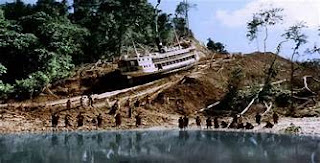 After several crashes into the rock-laden shores of the river, the boat surprisingly survives, but the down-hearted Fitzcarraldo arrives back in Iquitos without any rubber. He is able, however, to sell the refurbished steamboat back to the rubber baron, and, before giving over the vessel, sends the captain off to the distant opera house to bring back Caruso and the entire cast to perform on its deck, finally bringing opera to the backlands.

While this truly “operatic” story may seem slow-moving at times and highly unbelievable, we recognize that it really happened—not in the past, but in Herzog’s cinematic present. And that very fact turns this film from a cinematic fiction into a kind of daring cinematic act, a spectacle of insistence that movies really matter, that they can create realities vastly larger than life. Few directors—I am reminded of Coppola’s Apocalypse Now and Tarkovsky’s films—have dared to put so much on the line in filmmaking. And if, in all these works there is something, at times, “over the top,” we also know that we are seeing something we will never encounter again, and could never exist otherwise in “real” life.