Good Night, and Good Luck, George Clooney’s and Grant Heslov’s movie about Edward R. Murrow, is the kind of film that audiences always applaud. My companion, Howard attended the movie twice before I took in a showing on a weekday afternoon, and at each performance, we concurred, the audience so responded. 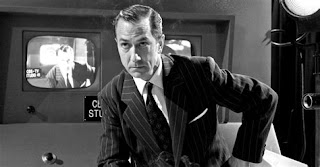 Certainly the focus of this film—Edward R. Murrow’s head on attack of then Senator Joseph McCarthy and the Senate Committee for UnAmerican Activities—an act of great bravery on Murrow’s and CBS’s part—is worthy of audience appreciation. Murrow’s reporting, his incisive appeal to his viewers that Americans were able to encounter ideas that threatened their system without censorship and arrestment of those involved, and his outright disdain for McCarthy’s methods of innuendo and lies is well documented and in this film is represented through an almost noir-like dramatization of real events interspersed with actual television and film footage of the period. The world McCarthy and his committee had created is brilliantly presented by Clooney and cinematographer Robert Elswit in cinematic terms through extensive use of rack-focus camera shots and a blurring of the background in many scenes, along with jumpy, held-hand camera effects that recreate the sense of early television and suggest the psychological condition of people involved in a time when it was sometimes difficult to clearly see the broader picture of world politics and where even the tiniest of questionable political behavior might jeopardize one’s career. W. H. Auden and others described the period as “The Age of Anxiety”; certainly it was a time that simply made one nervous to do anything out of the ordinary—or even sometimes within the ordinary , all which Clooney and Heslov reiterate through several dramatic episodes, particularly in scenes revealing the hidden marriage of Joe and Shirley Wershba (played by Robert Downey, Jr. and Patricia Clarkson) [studio executives did not permit employees to be married] and the continual need for self-evaluation of personal sympathies or even relationships with those who might have had seemingly Communist connections [CBS news announcer Don Hollenbeck (played by Ray Wise) is attacked by newspaper columnists for having “pinko” connections which brings on his suicide; and, when Murrow (brilliantly played by David Strathairn) and Fred Friendly (played by Clooney himself) demand their staff tell them of any possible communist connections, one staff member suggests he should leave the team for having previously been married to a woman who had attended Communist Party meetings before he met her]. In short, it was a time of deep paranoia that effected everyone.


On that fateful night in 1954, Murrow’s “See It Now” broadcast begin the downfall of McCarthy and his years of destructive effects on the American psyche, effects that still have consequence in today’s battles between the political left and far right. But if Murrow won the proverbial battle, he lost the “war,” so to speak. Soon after that brave journalistic act—one now recognized as among the most outstanding moments in American journalism—CBS and its head William Paley (played here by Frank Langella) cancelled this regular news program, moving its diminished series of five shows to Sunday nights. And it is this fact that, it seems to me, is really the issue of this motion picture. Clooney and Heslov document the McCarthy attack effectively, but they have another, perhaps more far-reaching theme to present: the general decline of American journalism, and the rise of MTV-entertainment television and newspaper coverage. The movie begins and ends a few years after Murrow’s famed show with a lecture he made to the American press about the ever-increasing lack of serious news coverage. 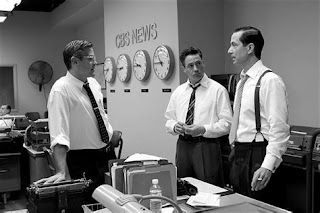 Accordingly, Clooney’s film, although presented as a kind of realist costume drama, is more than that, is a film that continues to have important significance today. It is unfortunate that the film only suggests—although quite forcibly—these issues. When one thinks about the declining coverage of serious events on US television, where local news stations now spend most of their time—at least in my city of Los Angeles—on car chases and local and national disasters; when one perceives that even the half-hour of national news coverage reveals little about major international events; when one recognizes that journalists today often do not seem interested in pressing for the truth behind political statements and presidential edicts or, when they do, like Judith Miller, they often connive and fabricate; when one understands that most books sections across the country have disappeared or, as with the New York Times Book Review and The Los Angeles Times Book Review have chosen to refocus their attentions on more popular genres and best-selling publications; when one puts this into the context of Murrow’s impassioned plea for more serious and complex reporting, one is perhaps made “nervous” again. Do we as a populace even know now when we’re being lied to? Do we even recognize today that our news is incomplete—or worse—simply not existent? I am always depressed when I return home to my family in Iowa, where in the thin pages of the Cedar Rapids Gazette—just as in most smaller citys—the entire news coverage is presented in brief AP notices? Yet my mother is convinced that she knows everything that’s happening of importance in the world; “I keep up with the news,” she proudly says.

Finally, it comes down to a societal and institutional disdain for Americans themselves, a feeling by a few who believe they hold knowledge (and often have no better grasp of it that anyone else) that the general populace cannot and will not assimilate complex information. A few years ago I had lunch with then-editor of the Los Angeles Times Book Review, Sonja Bolle. When asked what books I was soon to publish on my Sun & Moon Press label, I replied that we had just published a translation by the French Oulipo writer, Raymond Queneau. “O, I love Queneau,” she gushed, much to my surprise. “He’s a wonderful writer. But, of course, we couldn’t possibly do a review of his work!” “Why not?” I naively responded. Oh, our readers couldn’t understand a review about his literature. You know, most newspaper readers read at the sixth grade level.


I was appalled, not so much by the journalistic cliché we have all heard many times, but by the absolute misunderstanding, it seemed to me then and does yet today, of who her audience was. “Do you think,” I asked, “that it is the least literate part of your audience who reads the book section? Why even have a book section if that’s the case?


There are many readers for different reasons,” I concluded. “We live in a very diverse time. And furthermore, I don’t believe that any reader of a newspaper is a complete idiot. Don’t you owe readers something more than your disdain?” I could have been talking to the wall.


Accordingly, I wonder, when those many audiences applaud Clooney’s excellent film, just what it is that they are applauding: Murrow’s bravery for attacking a bigot? Murrow’s advocation of a more serious journalism? Clooney’s presentation of these issues? Or perhaps it is for all these reasons and more. I would like to think that in applauding Good Night, and Good Luck these audiences are simply asking to be treated as Murrow treated his, as intelligent adults.

Posted by greenintegerblog at 7:57 AM