Starring Yves Montand and the American actress Jane Fonda, Gorin and Godard’s Tout va bien has often been described, somewhat mistakenly, as Godard’s return to commercial film after his four year involvement with the Dziga Vertov Group films, for which he created works, as J. Hoberman described them, that were “were openly tendentious in their more or less Maoist analysis of the political situation in various countries.” While clearly espousing strong leftist positions—Fonda’s journalist character even describes herself as being the authority on leftist causes—Tout va bien is also a work which questions and even mocks Godard’s own work of the past. Indeed, it begins almost cynically, arguing for a movie that might make enough money to support the endless costs (an early scene showing checks, one by one, being torn away for all the actors, sets, costumes, designers, etc.) by bringing together major stars—which, of course, is what Godard’s film features. Yes, the narrator admits, there must be a society in which the characters exist, but the central genre it proposes for itself is a “love story.” And, in the very first scene, we see Montand and Fonda, walking, hand in hand, repeating lines from the “what do you love about me” scene between Michel Piccoli and Bridgett Bardot in Contempt. And, in some senses, Tout va bien repeats the film about film tropes of Godard’s Pierrot le Fou of 1965.
More importantly, Montand plays a filmmaker, formerly part of the New Wave, who has now turned to making (quite awful, if the scene we are shown is any evidence) commercials, a “more honest” way to make money. Although both husband and wife have formerly been involved in the French revolutions of the 1960s, they now speak of their involvement with some distance and questioning of their own sentiments and actions. Fonda’s journalist figure can no longer bear the “single-voiced” broadcast scripts she is forced to repeat and yet does not evidently have the ability to craft her own.
The main action of the film is an almost accidental confrontation between the two and a group of activist laborers in a meat-packing plant, who, tired of union inaction, take over the plant, destroying files and offices on the very day that the journalist has had an appointment with the manager to speak about modern management techniques. Having locked away the manager in his own office, the plant revolutionists capture Fonda and Montand—who has inexplicably joined her for the interview—throwing them into the office with the manager.


There the manager, in a spot-on satire of corporate managerial self-justifications, lectures the two before, out of disgust with the manager’s words, the journalist begins interviewing the holed-up workers, each of them attempting to tell her the “real” truth about working conditions and the society in which they live, while simultaneously feeling as they speak that they failed to say anything new. 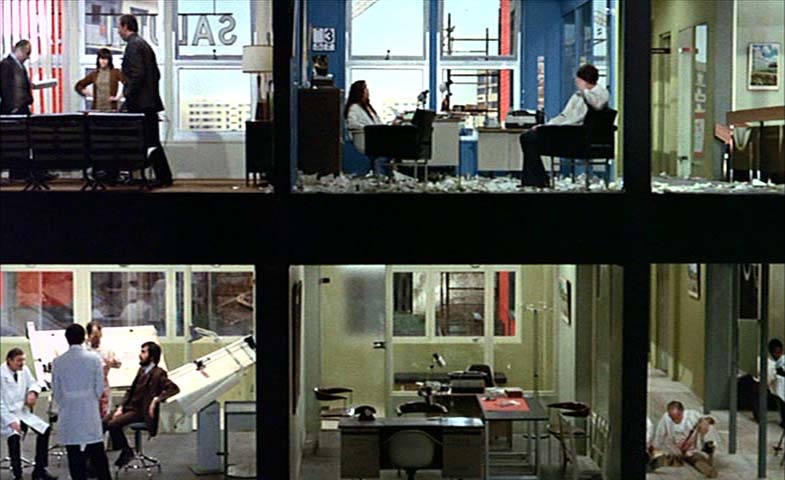 The entire factory, its outer walls pulled away, becomes a kind of stage-like set which reveals the factory’s innards as the workers tell their tales, often with Montand and Fonda seen performing the workers’ boringly repetitive acts of filling sausages and carting off carcasses of cattle. While Godard and Gorin’s Brechtian presentation may, indeed, point up social inequalities, it is also a comic representation, with no one becoming any wiser in the process. Fonda is not even sure that her studio will air what she writes (indeed, no recounting is broadcast). After three days of this “no exit”-like existence, the three are freed, the laborers brutally arrested.
The couple has perhaps learned something in the process, and both are changed to a certain degree. The Montand figure returns to “real” filmmaking, despite financial losses; Fonda’s figure tears up the copy she is set to broadcast and is ready to leave her job. Moreover, the couple can no longer find comfort in each other, for, in an important sense, they can find no comfort in their selves. What Godard and Gorin reveal is that, despite their political affinities, the two no longer can make sense of most political acts. Did what the revolutionary laborers do help them or merely silence them further, lock them away from the society at large? Were their actions, represented in the film as both heroic and ridiculous, of any significance?


The question is asked once again, as the directors show us another assignment that the journalist undertakes as she visits a large French grocer, reminding one of a kind American Wallmart. Into this world of row after row of ringing cash registers, the activists return, challenging an old-fashioned leftist who cannot ever answer for the rhetoric in his book before filling up their shopping carts with mounds of food and other goods and, after capturing the store’s microphone, announcing to all customers that everything is free. For a few minutes, it appears, their actions have created the desired effect, as the silent shoppers suddenly fill their carts and move toward the doors without passing by the expectant clerks. But here too, the revolution ends, as the police, in full riot gear, move forward, clubs in hand, beating the customers and revolutionaries both as they proceed. Has anything been won? 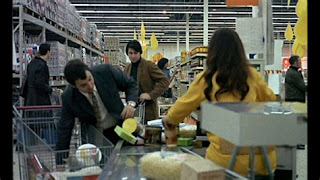 In short, the film, while espousing Godard’ politics, becomes itself an intense questioning of his and others' deep beliefs. What can alter the course of corporate greed, of a masculine-dominated marriage, of a culture that no longer seems to embrace change? And, in that sense, Tout va bien is perhaps a more moving expression of how to make films “politically” than were Godard’s Dziga Vertov films. In the end, the only answer to these questions seems to come in the notion that what is important is that each of us ask these questions, write them down and attempt to answer them, play them out in our minds, so to speak. Whatever answers we come to will be the definition of our histories, of history itself—as differently as each of us respond. For me, that is a profound realization: the fact that the most important thing is that the questions are asked and answered to the best of our abilities by each of us, not simply received from a dominating party or group.
At film’s end, the directors even allow that the marriage between the couple might be saved— or perhaps not. But Montand returns to Fonda, Fonda to Montand. Whether their meeting again will result in good or bad, no one can say, but it is the coming together of people, a meeting of the minds, that truly matters.
In hindsight, Tout va bien, a film that was disastrously attacked upon its first showing, seems a perfect bridge in Godard’s long and distinguished career, a work that was not afraid of questioning his own methods and direction.