making it up
by Douglas Messerli


In some respects Paul Thomas Anderson’s The Master, like his other films before it—in particular Bogie Nights, Magnolia, and There Will Be Blood—is, affectionatly speaking, an overstated, overacted mess of a movie, stuffed with often disconnected events. Part of the problem is that Anderson’s script, once it establishes its central character, Freddie Quell (Joaquin Phoenix)—an unpredictable, over-testosteroned ex-sailor, who, through the vicissitudes of war, his unhappy childhood, and his young girlfriend-back-home’s rejection, behaves like a time-bomb ready to explode—doesn’t quite know what to do with him. After mixing up a few drinks in the bowels of the department store in which he serves as a portrait photographer, Freddie harasses an overweight customer, beating him up and tearing apart some of the store furniture. His next job, that of a migrant-like worker in the cabbage fields ends, similarly, when one of the Mexican workers drinks too much of his moonshine concoction and goes into a coma; when his family accuses Freddie of poisoning him, the ex-sailor is again on the run, winding up this time on a yacht headed from San Francisco to New York. On board is the pompous “Master,” Lancaster Dodd (Philip Seymour Hoffman), who has created a new religion, The Cause, outlined in the first volume of his overweight opus that is a mish-mash of Freudian psychology, Jungian archetypes, science-fiction creatures from outer space, and a belief in a trillion-year history of mankind in which each of us has been housed temporarily in different bodies.* Like scientology, Dodd’s cult contains little real science, and a lot of bunkum centered on therapeutic encounters (similar to Scientology's "auditing") with church leaders, which supposedly frees them of their former selves, allowing them to become fuller beings in their present lives. 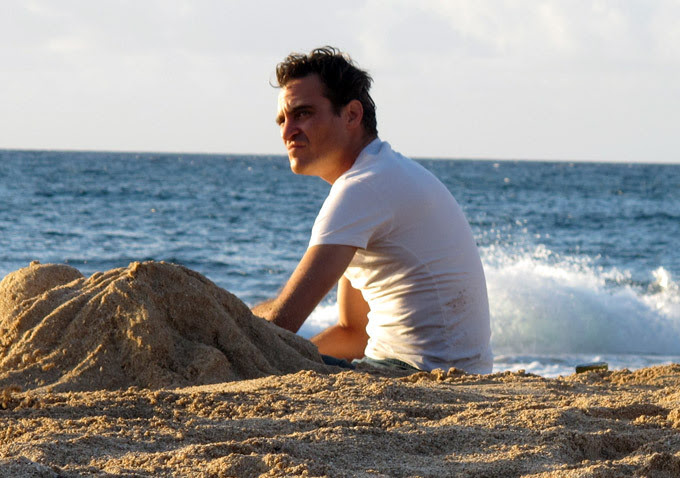 Through the link of Freddie’s potent "mixology" of an elixir of liquor, paint-thinner, and anything else he thinks might add a quick high, Dodd and he immediately bond, the “master” offering up private sessions with Freddie, after which he praises the young man’s bravery. Having seldom encountered such an assuring and friendly father-like figure, the young Freddie is hooked, and before he even comprehends why, becomes inculcated in the cult.


So far, the story, accompanied by a kind of kitsch recreation of Schoenberg-like soundings (by composer Jonny Greenwood) which are repeated with portentous earnestness, and a sound-mixing in which the characters are shout at one another instead of speaking (Phoenix, on the other hand, generally mumbling his lines), is interesting if only because it puts its audience vaguely on edge. What is going to happen to Freddie or, we might equally ask, to Dodd, as these two polar opposites are brought into long-time contact? Obviously something is going to ignite them—along, perhaps, with the film itself.


The problem is that Anderson seems to have no idea what he wants to say through the accident of their meeting. For a long spell, accordingly, the film merely repeats the two encountering and reencountering one another, circling round each other in moody suspicion. When Dodd is heckled at a New York party by a skeptical journalist, Freddie, with Dodd’s young son-in-law tagging along, makes a late night-visit to the inquisitor, assuring, through a beating or perhaps even a murder, that the man will never attack Dodd or his church again. Similarly, when Dodd is arrested in Philadelphia for absconding with a wealthy contributor’s money, Freddie explodes, attacking the police and, after being arrested, beating his own head against the bedposts and boxsprings before tearing out his toilet—a scene presented, with cinematic brilliance by having Dodd, in the very next cell, stand in utter quietude before summarizing the obvious: Freddie has a horror of any cage.


Family members and cult followers question Freddie’s participation in their group; is he a spy? someone sent to destroy their "Cause"? a potential robber (he has, after all, asked how much the “master’s” unpublished papers are worth)? If Freddie is to stay with them, he must certainly face a long re-indoctrination. Dodd determines to retain Freddie and personally oversees what we recognize as a slow, repetitive brain-washing. Family members, in particular Dodd’s wife, Peggy (a marvelous Amy Adams) and Dodd’s son-in-law, Clark (Rami Malek) spend hours in name-calling and tossing invectives at Freddie until he learns to control his temper and accept what he is told are “helpful” family observations. After hours and hours of such painful encounters, the outsider is once again brought into the fold.


But why, we must ask? What does the film want to say about these cultists? To give Anderson credit, he proffers no easy answers. For, in fact, Freddie is better off under their care than he was previously, careening through a culture which might have, in the end, landed him, like his mother, in a mental institution. Moreover, Dodd, despite his absurd assertions, is, at heart, loveable. Even his loyal son, himself, sometimes wonders, however, if his father isn’t just “making it up as he goes along?” When Dodd, at one meeting, steers in the direction of having the women of his congregation go naked while he sings a roving sailor song, his wife Peggy quickly shifts him in away. These frightful believers are, in Anderson’s telling, human beings, despite Dodd’s huge ego and his followers’ absolute subservience to his beliefs.


And despite the film’s lack of direction or, I should say, the director’s refusal to pilot his film in any one direction, the wreck of Dodd’s perverse religion moves forward, often quite stunningly through the richness of Anderson’s images, shown in the version I saw in 70mm (shot in 65mm), and through the dexterous acting skills of all concerned. While one cannot deny Hoffman is not, at times, overacting—throughout much of the movie he seems to be channeling Orson Welles—he still creates a personable character who is always watchable. Phoenix’s eccentric performance does not permit us to take our eyes off him, particularly since Anderson focuses on his ever-changing face, at one moment a handsome young man, at the next a snarling mad-man; with the off-center scar running across the top of his lip, the actor has the ability to smile and sneer in the very same instant. 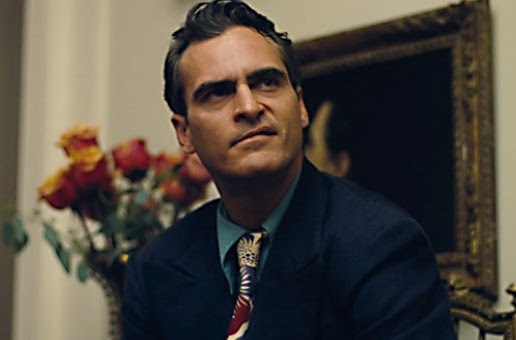 While Freddie remains loyal to the increasingly off-kilter “master,” we begin to see doubts hovering, particularly when Dodd introduces his second volume of revelations at a Phoenix, Arizona conference of the devout. One member carefully brings up a crucial shift in the “master’s” teaching from a question of “remembrance” of past lives to asking if the interviewees might “imagine” something of their past—a shift Dodd claims is simply more inclusive, but, as anyone acquainted with any church teachings knows, changes everything. Remembering asserts the event, while imagining merely permits it.


We suddenly see Freddie, after Dodd’s speech, marching back and forth, a troubled look upon his face. When he queries one of Dodd’s most loyal followers, the man admits that the entire book seems fraudulent and might just as easily have been winnowed down into a three-page pamphlet. Freddie’s violent attack on the man a few minutes later says more about his own doubts, surely, than the follower’s aspersions. Freddie cannot afford to not believe anymore.


Yet it comes as no surprise, after Dodd takes his closest followers into a flat desert expanse and challenges them each to pick a point in the far time and space and speed on a motorcycle furiously toward it, that Freddie will leave Dodd’s congregation. Returning to his Massachusetts hometown, he attempts to visit the 16-year girl he had left behind years earlier, only to be told that she is now married with two children. Once again, he has been left in the lurch without the possibility of love.


Throughout the early part of Anderson’s film, Freddie has been portrayed as a macho woman’s man, desperately on the search for a quick moment of intercourse. Stationed away from women, he and others create an Amazonian-like sand sculpture of a woman, which he fervently fucks before curling up to the object’s mountainous breast. But slowly through the film’s uncoiling revelations, we grow to perceive that Freddie, far from loving women, is a desperate misogynist, at war with every woman from his mad mother on. Moreover, as we have sensed all along, there is more between these two men, Freddie and Dodd, than a love of raw-gut liquor. Receiving a telephone call from Dodd, who is now heading a religious school in England—or perhaps just dreaming up the call—Freddie takes the long voyage to visit the “master” once again. Peggy rejects him outright, arguing that he is unfit to try to rejoin their community. But Dodd is only too ready to accept his protégé back into the fold—if only he will agree to rejoin them. The young man’s answer is as inevitable as unpredictable is Dodd's singing, in several verses, the song “Slow Voyage to China,” offering Freddie up all his love, both patriarchal and, given the song’s lyrics, sexual.


A tear falls from Freddie’s eye, reassuring us that the love, never acted upon, is quite mutual.


In a local bar, Freddie picks up a girl, with whom he has sex while repeating the interrogation that he underwent with Dodd upon their first meeting. If he has learned nothing else, he now recognizes the hidden language of seduction. Certainly, the “master’s” involvement with a young man is not uncommon in such cult leaders. One only need think of Jim Jones’s love for several of his male followers with whom he was sexually involved; or of the accusations of David Koresch sodomizing several of his male followers to prove their homosexuality. 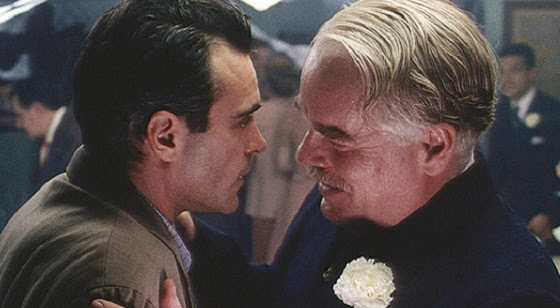 So Anderson’s seemingly misdirected film comes effectively to an end, as we discover that the cult Freddie (and perhaps all the others) was involved in represented for him not so much a religious awakening as an embracement of his being, a sense of meaning through family and love.


Ultimately, if Anderson’s film is not a great piece of cinematic writing, it is a work well worth seeing again and thinking about. For at the heart of The Master is the realization that religion and human desire has never been fully separated—as hundreds of lusting priests, ministers, and cult leaders annually attest. Power--in every sense of that word--is always behind religious belief; belief--in every sense of that word--is often behind any powerful sense of identity. And doesn't sex always meet at those two avenues, a sense of identity with a sense of powerful interconnection? So how should we imagine we might separate them? That is, obviously, what is behind almost all religions' attempts to intervene in our sexual lives! Sex and religion, alas, have been always inextricably intertwined.

*Interestingly enough, these elements are almost all present in Terence Malick’s film of last year, The Tree of Life, without any of Anderson’s perspicuity.
Posted by greenintegerblog at 8:48 AM