soil of the damned

Henrik Galeen (screenplay, based on Bram Stoker’s Dracula), F. W. Murnau (director) Nosferatu, eine Symphonie des Grauens (Nosferatu: A Symphony of Horror) / 1922, USA 1929, the showing I saw was at the Egyptian Theater in Hollywood on October 28, 2012

Although the recent showing I saw of Murnau’s great film, Nosferatu, was clearly timed for the Halloween season, I was struck in watching it the other afternoon that, in many senses the film—despite its awe-full and horrifying images—is not really a horror film in the way the genre has come to be defined. Yes, there a monster of sorts who destroys a large number of people; there are isolated landscapes, as in the later Dracula and Frankenstein, that gives one goose-bumps. There is even, as in Lang’s M, a terrifying chase scene that reveals the evils not only of the figure being chased—in this case the mad real-estate broker, Knock—but the blood-thirsty crowd behind him. Yet, not for one moment was I really terrified.

That is not to say that Murnau’s startling images were not effective, but their intent lies more in the psychological world than in the supernatural or metaphysical realm. As several critics have pointed out, this film’s monster, Count Orlok (Max Schreck) is such a misshapen figure—with his bulbous nose and outsized ears, the sad indentations of his eyes, the one or two remaining fangs he has left, and those dangling tentacles of fingers bound to his body-hugging thin arms cramped, clearly by too many millenniums spent lying in the coffin—that we feel more sympathy and sorrow for him than detestation or fear. His mad disciple, Knock (Alexander Granach) is far more horrific. 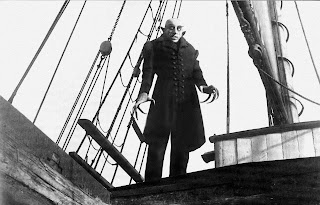 This monster also seems far more symbolic, in some senses, than real—a necessity for true horror. And Orlok’s demands and actions bring with them more questions than simple evil intent. For example, one must immediately ask, why has Orlok suddenly decided to leave his Transylvanian retreat for a decrepit warehouse in Wisborg, Germany? One presumes that in his current situation, with the fearful peasants wised-up to his dangers, that he simply cannot get enough blood where he currently lives. 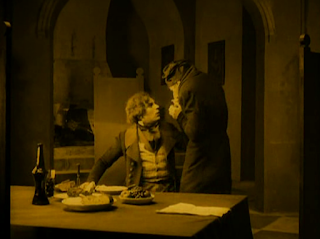 Hutter’s (Gustav von Wangenheim) accidental cutting of his finger at Orlok’s dinner table creates in this poor beast almost a fury of lust as Orlok almost swoons in his descent to suck it up. Murnau turns this act—in response to which Hutter backs away in almost moral disgust—into one of the most homoerotic scenes in all of silent film-making. And while we are on that subject, why does Hutter, when no one else does, survive Orlok’s bites? One has to suppose that Orlok, despite his appetite for the handsome Hutter, has determined to let him live, perhaps simply for embodying all the beauty that Orlok lacks. But clearly, given the puncture wounds on Hutter's neck, Orlok has spent at least part of night in bed with his beautiful guest. 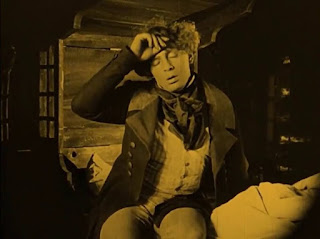 Certainly, it would have been far easier, given, as we are later told, the vampire’s requirements of traveling consist not only with his own coffin but several others containing the damned soil of his homeland in which he nightly is buried, to have stayed a few more nights with Hutter dining in his blood.

Orlok’s travel may have been determined by Stoker’s fiction, but it fits the pattern of Murnau’s films. Upon regaining his youth, Faust migrates across Europe in a series of sexual orgies before returning to his homeland, where he brings his contagion with him, dooming the innocent Gretchen. Similarly, in Sunrise the county bumpkin, tempted by the woman from the city, dares a voyage to a new territory where he is not meant to be before returning to the peace of country life. In Tabu it is the white intruders who destroy the island serenity. Just as Murnau, in his films, often moves out of the studio into a real world that expands the German Expressionist staples of dark shadows and exaggerated angles into the landscape shared by the audience itself, so do different cultures in his movies effect each other, bringing about, sometimes, calamitous events.

Throughout the early scenes of Nosferatu Hutter and others describe Transylvania as a world of “thieves and ghosts,” a world of dangerously unscientific thinking—particularly compared with the professorial demonstrations of Sievers (Gustav Botz) within the German university. Even a book from that soiled world is a dangerous commodity, against which Hutter warns his wife and, in the end, is Ellen’s (Greta Schröder) undoing, as she convinces herself, after reading it, that she must sacrifice her life to destroy Orlok. Orlok may describe Ellen’s neck as being beautiful, but, at least to my taste, the actress Schröder is no great beauty; at moments she looks almost as if she were a male in drag. And Orlok seems to have as much taste for sailors and the Hutter’s neighbors as he does for Ellen herself, who, perhaps unnecessarily, gives up her life to assure the monster's death. 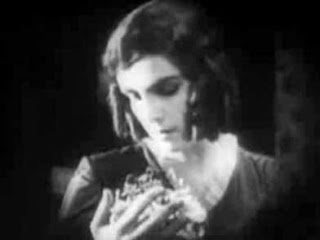 Nosferatu, accordingly, is less about supernatural evil than it is about social and intellectual contagion, symbolized by the plague Orlok brings with him, symbolized most notably by the thousands of rats brings with him, the harbinger of plagues. The small town of Wisborg and Germany in general are infected with the outsider’s ways more than by Orlok’s acts. They become like the superstitious “thieves and ghosts” of Transylvania racing through their streets, Murnau’s fluid camera transcending to the skies, as the villagers chase after Knock.

Ultimately, it is not Orlok himself who is so dangerous—he, after all, unlike Stoker’s Dracula, can be destroyed by a single ray of sunlight—but that which he represents or signifies. As Murnau shows us, Orlok’s shadow—most vampires do not present themselves as shadows, are not visible in mirrors, whereas in the last scenes Orlok is seen in both shadow and mirror—is more horrific, I would argue, than his bite. 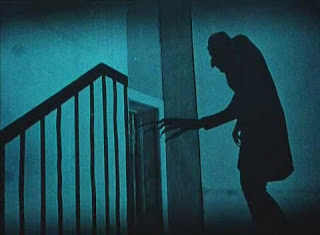 The horror of this tale, accordingly, is more about an infection of inferior thinking than it is about the fangs of a vampire or an infestation of rats. Given those very attitudes of the German people just a few years later, with their belief in the "pure" German and their perception of Jews, gays—Murnau himself suffering the restrictions of homosexuals far ahead of this period—and Gypsies as "dangerous" outsiders, we comprehend the true horror of this wonderful work of cinema-making.

And in that fact, the suggestion that it is the “contagion” that Orlok, the outsider, brings with him that represents the true terror faced by the traditional culture, we recognize that Murnau’s vampire is very much a figure which emblematicizes homosexuality, signifying danger to the heteronormative society. We might almost argue that with this film and James Whale’s horror films of almost a decade later we begin to see the use of the horror genre as a convenient cover or coding tool to discuss all things queer and outside of hetero-normalcy and the cultural and political values that go along with that. Since to the conservative heterosexual society homosexuality was already a monstrosity, it was an easy transition to cloak gay and lesbian outsiderness within the developing horror genre. And perhaps no film makes this more obviously than Murnau’s symphony of horror.

Posted by greenintegerblog at 2:23 AM