the unforgiven
by Douglas Messerli


With a grim, slow-moving story, Jan Gruyaert’s excellent film makes up for it with a series of beautiful images. True, as New York Times critic Vincent Canby noted in his 1985 review, the images portrayed are almost all predictable: the muddy fields, the waving flax,” tight close-ups of the creatures that inhabit the earth - ants, worms, snails, grasshoppers.” But given the world that the old farmer Vermeulen (Vic Moeremans), his son Louis (Rene van Sambeek), and Vermeulen’s wife Barbele (Dora van der Groen) inhabit—a world that absolutely depends on predictability—how else might the director conveyed the film’s truth?


The farmers of Flanders determine everything by pattern, by detecting the gradual shift of the soils, the fairness of winds, the growing movement of insects to know when to sow their crop. But in the particular year which this film recounts, old Vermeulen has suddenly become unpredictable, refusing the sow his crop on the higher ground his devoted son suggests and waiting beyond the time other locals have already planted. 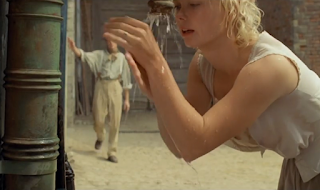 Vermeulen is a hard task-master, a cold-hearted authoritarian who has reached an agreement with his wife that he is always right. Louis has come of age, and is suddenly a handsome, vivacious young man who should long ago been awarded for his obedience and diligence a least a hand in controlling the farm. Like an Old Testament figure, however, Vermeulen detests the very intelligence and sensuality of the boy, particularly the young man’s infatuation with a working girl living on the farm, Schellebelle (Gusta Gerritsen). 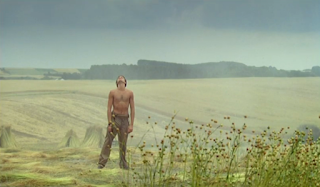 Schellebelle is everything that the Vermeulen family is not; light-hearted, almost radiant in her appearance, somewhat of a flirt, she is the very manifestation of youth and joy. For Vermeulen, accordingly, she represents the devil himself. As Louis becomes more and more involved with her—innocent as that relationship is—the old farmer grows more and more troubled, finally determining to use his life’s savings to buy a neighbor’s decaying farm for his son; he orders his wife to find an appropriate bride for the boy.


While Vermeulen is an auction, however, the rains come, suggesting that it is time to harvest the flax before it is destroyed. Louis, taking responsibility, orders the grain to be reaped. The lovely scene in the fields is one of the most poignant in the work, ending with a dance, Louis choosing Schellebelle as his partner. 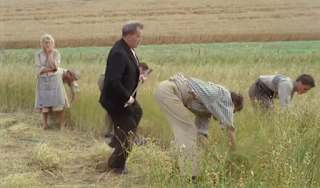 Returning home, the old farmer is outraged that things have proceeded without him, and, as the son moves toward the lovely maid, strikes his him down with a hoe.


The horrifying last scene shows the boy in a coma upon the bed, the old man sitting in a chair to attend him. Finally, he has found a way to overcome and dominate the spirited youth once more.


Gruyaert tells this grim tale without any of the sentimentality present in the original text. While that may distance his audience, it has the effect, almost in a Brechtian manner, of allowing us to more fully perceive the moral absurdity of Vermeulen’s cosmos. His struggle with his son is an age-old story that gets played out in hundreds of tales and analyzed on Freud’s couch. But in Gruyaert’s objective telling it suddenly seems surprising fresh and is more horrific for that reason. Louis, never truly disobedient but always well intended is destroyed for those very qualities. He is unforgiven simply for being what he was raised to be, a loving and loyal son.
Los Angeles, October 7, 2012


I should mention that my Sun & Moon Press published a translation by Peter Glassgold and Andre Leferve of Streuvel’s The Flaxfield in July 1989, as the third volume of my Sun & Moon Classics. The work has long meant a great deal to me, and I hope one day soon to reprint it into our Green Integer series.