Litvak’s film of 1948 is totally unbelievable, filled with such ridiculous coincidences and disconnected plot circumstances that, in the hands of a lesser director and actor, would make this work laughable. It is, at times, still laughable, but once you accept the melodramatic and film noir aspects of Sorry, Wrong Number, the movie becomes quite enjoyable, even though it ends in the central character’s murder. 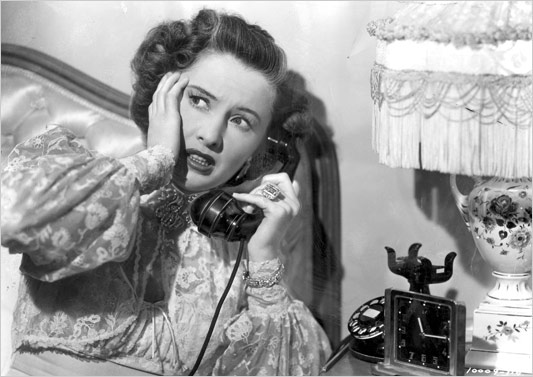 Bed bound, slightly hysterical at all times, Leona Stevenson (Barbara Stanwyck)—much like today’s constant cell-phone addicts—is linked to the world, so it seems, only by telephone. As the film opens, she has been trying, unsuccessfully, to reach her husband’s office; he is late returning home. Barking out commands to an invisible operator, we immediately recognize her as an imperiously rich woman, determined to get immediate results:

But in this case she gets something she has not sought out, a crossed line conversation which, after frustrated attempts to interrupt, she perceives as a plot to murder a woman at 11:30 that night. Demands that the operator redial the number prove fruitless, and she, seemingly, a near cripple is forced to contemplate the meaning of events—something which she clearly has seldom done. 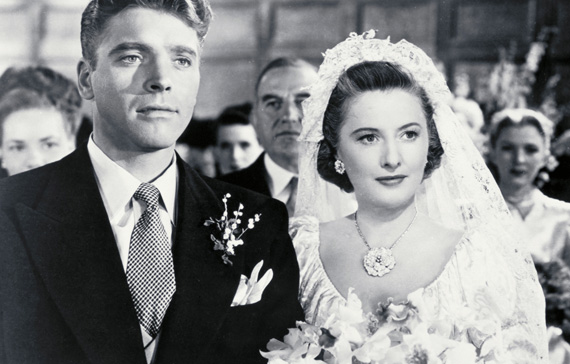 A call to husband’s secretary, a call from her own father, and, finally, a call from her husband telling her he is traveling on business, gradually reveals her and her husband’s story, a clearly unpleasant one. Daughter of a wealthy drug manufacturer, Leona has hand-picked her husband, literally pulling him away from another woman, Sally Hunt Lord (Ann Richards), at a high school party. Henry (Burt Lancaster) is from a poor Grassville family, a man determined to make it good. And perhaps he might have achieved something important had he married Sally. Leona simply made it easier for him, introducing him to her father, who immediately awards him, upon the daughter’s demands, a responsible position in his pharmaceutical company. But, in fact, the job is an almost meaningless one, and Henry is disenchanted. Yet every step he takes toward independence results in a nervous attack upon Leona’s health—clearly, as we learn later, a tact that she has taken since she was a child in order to get her way.


To raise enough money to leave his job and/or wife, Henry bribes an employee chemist to help him steal, each week, drugs, which he sells at an isolated house on Staten Island, a few miles from the complany plant.


In another absurd coincidence, Sally, now married to a detective, has discerned that her husband in tracking not only the drug-trafficking plot, but suspects Henry Stevenson’s involvement. Clearly still harboring some feeling for him, Sally makes a visit to Henry to tell him what she knows and, later, is another of Leona’s telephonic visitors. Several times, moreover, a stranger, named Waldo Evans (Harold Vermilyea), calls, asking to speak to Leona’s husband, and finally revealing that the illegal activities have been foiled by the police, the house burned to the ground.


Bit by bit, piecing together the series of information she has acquired, Leona comes to realize, too late, that the conversation concerning the 11:30 murder has been about her, and that the client was Henry. In a final call from her husband, Leona reveals her knowledge at the very moment that Henry tries to help her escape the approaching murderer. Despite the fact that we now know that Leona has been perfectly healthy all along, in her own mind she remains a frail cripple, unable to even call out for help, thus ensuring her own death.


As I’ve said, the story is quite ludicrous. But Litvak keeps out attention by shifting our emotional responses to the central characters. Just as his camera hovers over and circles what we first see as a sickly and frightened woman, so, as the plot unfolds, do we shift and transfer our emotions regarding her.


Early on we realize that it is her sexually philandering father, James Cotterell (Ed Begley) who is the real villain, not only for giving her nearly everything she has wanted, but for years insisting that she remain with him as a kind of surrogate wife. Similarly, it is he who has entrapped Henry in a meaningless job even more than his demanding wife has captured him in their marriage. Leonara’s darkened room, littered with vials of pills and entertainment magazines becomes a symbol of both their imprisonments.


Outside this outhouse environment, things are even stranger and bleaker. Sally’s home is portrayed as an unpleasant one, her husband and another friend drinking as they plot their strategies, she forced to herself to go under cover, so to speak, to discover the truth. Henry’s secretary, evidently, lives in a rooming house where she spends her nights playing bingo.


Worst of all is the strange world Henry has created to carry out his fraud. The beach itself, with its ever-present clam digger-guardian, the desolate shack and boarded-up house, and the quick visits by desperate plotters create an almost surrealist landscape that represents everything but the “good life” Henry has sought.


In the end, all the figures of Sorry, Wrong Number, including the well-meaning Sally, have used each other in search of their own desires and needs. If the telephone, as the film’s prologue states, is “a link between millions of lives,” it is also—at least in this work—a tool of isolation, disorientation, even “death,” a fact of which we might remind us of ourselves in our constantly text-messaging, twittering babel of communications.