the do-gooders
by Douglas Messerli

Cristian Mungiu (screenplay and director), based on books by Tatiana Niculescu Bran) După dealuri (Beyond the Hills) / 2012 / I saw this film in Los Angeles at the Chinese Theare during the 2012 AFI Film Festival on November 5, 2012.


Cristian Mungiu’s film, Beyond the Hills begins at a train station where Voichiţa (Cosmina Stratan) is greeting Alina (Cristina Flutur), the latter, we later discover, returning to Moldavia from a stint as a bar maid in Germany. Alina intensely hugs her friend, as Voichiţa nervously pulls away, muttering that people will see them. Already we sense both the intensity of their relationship—they grew up together in an orphanage—and perceive that something has changed, that their friendship is now fraught. And we soon discover just what that alteration is when Alina takes her friend, with whom she quite obviously has had a lesbian relationship—neither the story nor the director ever confirm this, although a latter massage between the two women certainly reveals, as critic Manola Dargis notes, “complexities” in their relationship—to her new home, an orthodox monastery “beyond the hills,” run by a kindly, but strict, priest (whom the nuns call “Pappa,” Valeriu Andriuţă) and the gentle and submissive Mother Superior (whom they call “Mamma,” Dana Tapalagă). It is a place, we immediately realize, where the high strung and strong-minded will never feel at home. Despite the fact that Alina shares a room with her friend, Voichiţa’s love has been replaced by a love of God. The newcomer may also be pregnant.
The monastery is an isolated and ramshackle place of small huts, a communal kitchen where most of the action occurs, and a church, attended by the locals. The girls living in its crowded quarters (others wish to join the order but are told that there is no room) work hard, raising chickens and caring for the gardens, gathering wood and water, cooking, and praying. They are all dressed alike in black. Rain and snow dominate the weather.


Although, both Pappa and Mamma are soft-spoken and outwardly reasonable with their charges, as with most fundamentalists there is little room in this monastery for wavering beliefs or even hidden doubts. Alina has no faith, has seldom gone to confession, and, apparently, has been independent-thinking even in the orphanage, where she used her karate skills. It does not take long before she lashes out at the close-minded world in which she has suddenly discovered herself; but we recognize also that she is not as angry about their pious mission, as she is with the changes in her friend. As lonely as she has been in Germany, she is made even more lonely in the small community “beyond the hills,” and she quickly becomes paranoid even about the gentle eye-contact Voichiţa has with another nun. A violent outburst forces the women to tie her up and call the hospital. But the local hospital, evidently, has only one ambulance, currently in use, and the order is forced to call a friend, Mr. Valerică, who ferries them in his auto. 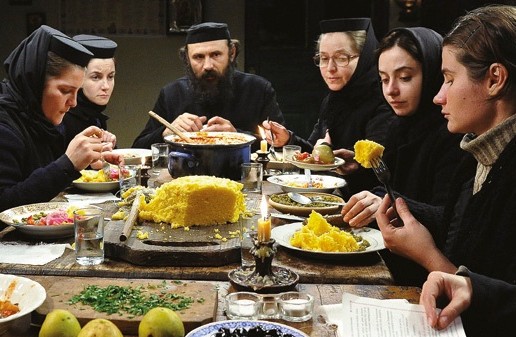 Even in the hospital, Alina remains tied down; but gradually, with the help of drugs, she returns to normality. Recognizing the stranger’s unfitness for their order, Mamma attempts to have the hospital take charge of her, but they refuse. She will be better looked after at in the monastery, they argue. So the order has no choice but to take her back.


Slowly Voichiţa attempts to accommodate Alina, medicating her and teaching her the sins of the world—of which, according to the Priest, there are more than 400. Alina confesses and even accepts the prostrations she must suffer for her sins. But eventually, when they discover her behind the altar in the church, rummaging for an icon that supposedly works miracles, she once again grows violent, breaking the glass in which the icon is kept. Once more, Mamma attempts to find another home for her, taking her to the house of a couple who had temporarily taken her in before her travels. But the family has brought in a new girl, and, although they are happy to put Alina up for a while, they cannot permanently take her back. Once one has left orphanage, moreover, there is no return. Alina has nowhere to go but to the small huts beyond the hills.


It does not take long for Alina to lash out at the nuns and Priest once again; locked in her room, she attempts to set the place afire. Both Mamma and Voichiţa suggest an exorcism so that she can be freed of her stubborn ways, and Pappa finally gives in. Now furiously violent, Alina is tied to a wooden plank, in response to which she continues to thrash out; they place  two pieces on either side in order to tie her hands as well, creating a kind of crude cross.


The exorcism takes days, during which the girl continues to struggle; she cannot eat and drinks little, her stool soiling her pants. When, a few nights later, Voichiţa can no longer bear her friend’s howls, she sneaks into the chapel where they have put her, unties her hands and legs, bidding Alina to leave.


The next morning, a miracle has seemed to happen. Alina has “come back to herself,” but, just as the nuns, Priest, and Mother Superior rush to her side, her pulse suddenly becomes faint. An ambulance is called, but by the time they have reached the hospital, the girl has died. The head doctor brutally recounts the causes of death, noting the marks around her hands and legs, the girl’s obvious dehydration, etc. The police soon visit the monastery, taking the Priest and a couple of witnesses, including Voichiţa, to the prosecutor. 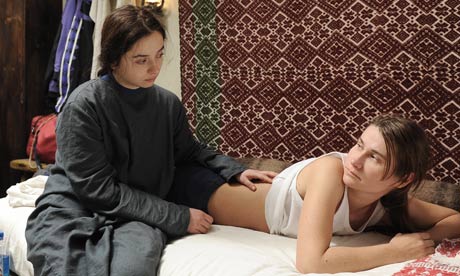 The prosecutor is busy taking evidence for another crime that morning: a young boy has killed his mother. And the film ends with small group waiting in the police car, the snow falling around them, a passing vehicle splashing blackened slush and water across the front windshield.


Based on two nonfiction novels by Romanian writer Tatiana Niculescu Bran, Mungiu’s film is a long (at 155 minutes), starkly realistic work has been described by some critics as “lugubrious” and exhausting, similar to the reaction of some to  his previous film, 4 Months, 3 Weeks and 2 Days, a work I enthusiastically reviewed in 2007. Screen Daily critic Dan Fainaru predicted when the film won the best screenplay and both the lead actresses won for Best Actress Award at the 2012 Cannes Film Festival, that it was “bound to split both audience and critical opinions, some considering it a major achievement and others blaming it for overlong pretentious sensationalism.”


Those who believe the latter are apparently not watching the same movie I saw. For this is not a work about evil events in an isolated monastery; Mungiu has made a film so straight-forward and honest that it blames no one in particular. While certainly a central battle in this film is between faith and free will, between submissiveness and passion, Beyond the Hills does, in fact, take us far away from the little monastery and its hills in the ramifications of its subject. Although the Priest and nuns may have unintentionally killed Alina, as Mungiu has suggested they are not alone guilty: Mungiu: “…It is difficult to say who is guilty, because the people who are really guilty are not in the film.”


I would argue that some of guilty are portrayed or at least hinted at: certainly the hospital staff rebuffed her, the ambulance drivers criticized for having even attempted to save her; the family with whom she lived may have had good intentions, but they use girls like Alina as cheap labor; the entire orphanage system dumps their charges into the society at large without jobs or proper skills. Even the police dispassionately discuss events as if there were no humans behind them. In short, there is no place in this world for a young independent-thinking and passionate woman like Alina. In Beyond the Hills everyone means well; they are all do-gooders who cannot comprehend their own limitations and incompetence. The director suggests—like the image with which he closes his film—that his is a dirty society through which one can only see the world darkly, if at all.