A New Beginning
by Douglas Messerli

Sachiko Tanaka (screenplay), based on work by Max Mannix, Kiyoshi Kurosawa (director) Tokyo Sonata / 2008, released in the USA in March 2009


Early in Tokyo Sonata we witness a rainstorm, the breeze blowing the raindrops into the modest Tokyo home of Megumi and Ryuhei Sasaki. Megumi rushes to close the window and wipe up the water that has fallen to her floor, but in the very midst of the act, she pauses, momentarily opening the door once more. We recognize her immediately as a woman pondering the dangers that lay outside her seemingly tranquil life. 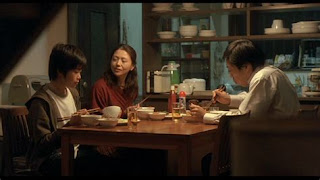 At his office, Ryuhei works as an executive director of a department that suddenly has hired a new Chinese woman—willing to work for considerably less than most of the other employees—and before the day is done, Ryuhei is fired. Startled by his new situation, and completely unprepared for it, he briefly wanders the streets before returning home.


Communication between family members is failing. The oldest son, Takashi, a college student, rarely returns home, and when he does he says little; Ryuhei describes him as “hopeless.” Kenji, the youngest, increasingly realizes that communication with all adults is a dangerous business. Caught in the classroom passing on a book of sexually explicit manga drawings, he is punished by the teacher. Feeling the punishment to be unfair, he reports in front of the class that he has seen the teacher viewing anime on his way to school, challenging the man’s authority. Accordingly, at home he eats silently, while his father broods. When Kenji surprisingly asks if he might take piano lessons, Ryuhei explodes, adamantly refusing to even consider it.


Only Megumi seems to be able to speak civilly to her husband and children.


Pretending to leave for work the next morning, Ryuhei spends the day on a park bench, lunching on free food set up for the unemployed and poor. After facing long lines to the unemployment office, he has been told that he might be able to obtain a job as a manager of a food store, but rejects it as too menial. Discovering an old college friend in the same food line, Ryuhei learns how to make use of the local library and other places where the two wait out their imaginary work day.


Having given up on trying to communicate his desires, Kenji secretly signs on for piano lessons in a nearby home, using the money given to him by his mother for the month’s lunches at school. We see an increasingly frustrated Takashi, unable to find any suitable career. Ryuhei, meanwhile, begins a long descent into a world of secrets and lies. Indeed this very normal-seeming family has nearly fallen silent, terrifying Megumi and creating a tension between themselves that is ominous to say the least. As the overly-wise daughter of Ryuhei’s friend observes of Sasaki, “You’ve got it bad, haven’t you?”


Takashi’s decision to join the American military as an alien worker further plunges the Sasaki family into anger, as the father refuses to sign the permission, and Takashi leaves their home permanently. Although Takashi survives Iraq, he determines to stay in the USA as a potential terrorist in response to the acts he has witnessed.


Kenji, meanwhile, has discovered that he has a natural gift for music and is told that his playing shows signs of genius; when his mother discovers a small broken keyboard in his room and receives a letter inviting their son to apply to music school, she is both troubled by his deceit and delighted by his talent; but Ryuhei, once again, grows angry in his inability to control his family and his own life, pushing the son from the staircase to the floor below; fortunately, Kenji survives the slight concussion.


The vortex of fear and anger spirals even further out of control as Ryuhei hears that his friend and wife have committed suicide, and, determining to take any job available, secretly begins work as a janitor in a local shopping center. If thus far Toyko Sonata seems best understood as a kind of psychological soap-opera of events which are easily recognizable in the context of today’s global economy, Kurosawa pushes his film into another dimension as Megumi encounters her husband working in the red garb of a cleaning man in a shopping center.


Suddenly, the movie shifts from its realist perspective, skipping back into a time a few hours earlier, where we witness Megumi being taped and bound in her home by a would-be thief. Discovering that she has no money, the thief prepares to leave, removing the covering that has hidden his face. The sound of a police siren, sends him back into the house, and too late, he realizes he will now be recognized by his victim. He forces her into a stolen car, and the two race away to...well that is the problem, both the incompetent thief and victim have nowhere to go. 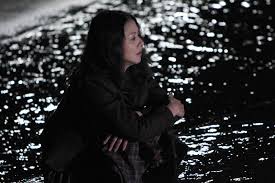 From here on the movie pitches into a kind of tragi-comic opera, as Megumi demands they stop by the local shopping mall for the toilet and to pick up a few provisions for her new journey. There she repeats the encounter with her husband we have witnessed earlier. Ryuhei rushes away, declaring “It’s not what it seems.”


Meanwhile, Megumi surprisingly returns to the car and the astonished thief. Without a destination the two drive to the ocean, where they camp out in a small shed and share with each another tales of their failed lives. The sexual encounter that follows lies somewhere between an act of passion and rape. Megumi determines she cannot go home, and lies upon the beach preparing to wait out her fate. As Megumi has told the thief in their conversation, she feels that she is trapped with no options for a future, but wishes that there could be a way to simply “start over,” to be born again. Yet we know Megumi has too much sense of purpose to completely give up her present life, and when she awakens we discover her back in the shed, the thief having apparently driven the car into his watery grave.


Ryuhei has attempted to run so far from the reality of his life that he is now seen stumbling and falling upon the rubble of Tokyo overpasses and streets. At this point, he is so delirious that he races out in front of a car and, so it seems, is hit. The driver pulls him away from the car’s grille and deposits him by the roadside, apparently leaving him for dead.


Kenji attempts to sneak a ride in the baggage section of a bus on its way to another city, and after being caught by the driver, is arrested and imprisoned for the night, refusing to answer any of the police’s questions. With the rising of the sun and the disappearance of her captor, Megumi has little choice but to return home. But this time, unlike all the comings and goings we have seen before, the house lies empty. Without her presence, it is as if none of the others can return either. The increasing silences of the household members has transformed it into a house of death. However, in that reality, and through each of their symbolic deaths, they are now freed. Kenji’s cell is opened; the case has been dropped. Miraculously Ryuhei awakens, slightly battered but able to walk. As, one by one, they slowly come through the door, there is a sense that life may “start over” after all.


The final scene depicts Kenji’s piano audition, to which Ryuhei and Megumi arrive just before their son plays. Kurosawa ends his meditation of family life with a complete performance, brilliantly played by Kenji, of “Claire de Lune,” Claude Debussy’s setting of Paul Verlaine’s poem in which dead dancers perform in the moonlight, an appropriate piece since it signals the family’s recovery from lunacy and death.


At times a bit lugubrious and, at other times, lacking in believability, Tokyo Sonata nonetheless is an engaging portrait of the dilemmas and strengths faced by contemporary families.