TURNING BACK
by Douglas Messerli

Robin Swicord [screenplay], based on a screenplay story by Eric Roth and Robin Swicord (suggested by the story by F. Scott Fitzgerald), David Fincher [director] The Curious Case of Benjamin Button / 2008


As perceptive critics have noted (as opposed to those, such as Los Angeles Times critic Kenneth Turan, who dismissed this film), The Curious Case of Benjamin Button, very loosely based on a story by F. Scott Fitzgerald, is a love tale, a fable of love moving in opposite directions. The hero, Benjamin Button (Brad Pitt), is born as a man of eighty -years old, who falls in love with a young girl named Daisy (Cate Blanchett), who, as she grows to a young teenager and, later, a young woman, continues to reenter and leave Benjamin’s life until the moment when they are both nearly the same age and for a few precious years have a intense relationship, themselves bearing a child.


The tragedy of this tale, however, is that before long Benjamin is doomed to grow too young to care for the child at the very moment when Daisy is becoming too old to care for them both. Accordingly, he leaves her, and she marries another man who is a good father to her young daughter. Benjamin disappears into youth, meeting Daisy only once for a brief sexual encounter, and reenters her life again as a young boy for whom she cares as he descends into infancy and, finally, as a baby, dies. 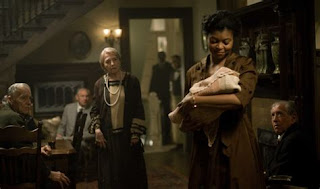 If this had been the entire focus of the film, and if Swicord and Roth had let the piece remain, as it is in Fitzgerald’s original, as more of a fable than a veristic story, the film might have had a sort of bittersweet charm that could have swept audiences up its myth. But the authors and director David Fincher have added numerous unrelated adventures, setting the story in a New Orleans about to undergo Hurricane Kathrina and propelling Button and other characters to the bitter cold of Minsk and into heroic adventures of World War II, all the while alternating these highly realistically- portrayed events with a kind of moralistic essay on the superior humanity of the film’s Black figures and the gentle wisdom of its old. Although the movie skirts general sentimentality, it toys with it in its simplistic messages centered around carpe diem.

Fortunately, this film is saved by another, more subtle theme, which I believe gives it an epic weight that justifies its length. While Benjamin moves solidly through the film backwards in time, the other characters moving forward are forced in their encounters with him to rethink their lives and face up to their failures in the past. This results in a kind of “turning back,” a decision to change the errors of their past, and in that sense, leads for a kind of redeeming of life for each of them.


Benjamin’s father, Thomas, faced with the horrific specter of an eighty-year old infant, a child moreover that has ended in his wife’s death, has cruelly abandoned the child on the steps of boarding house over which a black woman, Queenie presides. Upon discovering the child, Queenie readily adopts it, allowing it to grow up old in a house of old people. Yet Thomas, upon encountering the child years later, at a time when Benjamin is closer to 50, invites him to dinner and further encounters, ending, as the father grows old, in his revelation to Benjamin that he is his son. At first, Benjamin is outraged by the fact of the abandonment as opposed to the continued kindnesses of his Black mother. But Benjamin, in some senses, is presented as a blank slate, and ultimately a reunion between the two, however shaky, is accomplished, and he nurses his father into death.


Similarly, the older woman, Elizabeth Abbott (wonderfully played by Tilda Swinton) with whom Benjamin has an affair in Minsk, is encouraged in his gentle love to look back upon her failed marriage and her own lack of initiative. Once a great swimmer who attempted, unsuccessfully, to swim the English Channel, she has done little since except suffer the empty relationship of her marriage. By film’s end, and at the unlikely age of 62, she successfully achieves the goal she had previously abandoned.


So too does the heavy-drinking captain Mike of a New Orleans-based tugboat shift, upon encountering Benjamin, from braggadocio and whoring to heroic accomplishments as his small craft rams a German U-boat that has destroyed a large Allied warship.


Daisy, intrigued throughout the story by Benjamin, rejects his proffered love simply because he will not go bed with her the one night she is in town. Later, upon his visit to her in New York, she resists his love because of an affair with another dancer; and finally, suffering from an automobile accident that has robbed her of the possibility of ever again being able to dance, she demands he leave her bedside.


Months later, however, she too “turns back,” returning to him in New Orleans where they have their intense if brief love affair. 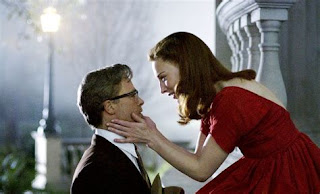 Despite her anger over Benjamin’s decision to leave her and their daughter, she gradually recognizes that it has been for the better, and as he descends into boyhood and, ultimately, infancy, she takes over the role of his mother, nursing him back into the metaphorical womb.


Her own daughter, Caroline, has clearly been distanced from her mother, but in the framework of the narrative, has returned to New Orleans to her hospital deathbed during the advance of Hurricane Katrina. She too, accordingly, has turned back, coming to the aide of her mother, as her mother, turning back one more time, insists Caroline read the autobiography of Benjamin Button which reveals the girl’s own parentage.


In short, each of the major figures, faced with a being moving in the opposite direction of the flow of life, are encouraged to reexamine their own forward rush into death. The result is redemption far deeper than the easy lessons on the surface of Fincher’s interesting but deeply flawed film.