love is death
by Douglas Messerli


Watching the great German-American director F. W. Murnau’s last film yesterday, I suddenly perceived that—despite its exotic locale of Bora Bora and the fact that numerous film critics note time and again just how different this film, with its use of natural scenery and real-life constructions, is from his highly stylized and theatricalized pairings of costumes and sets of films such as Nosferatu, Faust, and Sunrise—shares his basic German sensibility so evident in someone like Wagner: love is death.


For Murnau—an outsider homosexual, forced to leave Germany because of the strict laws against his sexuality—his predilections for handsome young men, in fact, were dangerous. Shortly after filming Tabu and before its theatrical release, the director died in a fiery car crash driven by a young Filipino, chosen, so the story goes, because of his beauty more than his driving skills. Some legends have it that Murnau died while committing fellatio on his young charge. Love was certainly death for Murnau himself.
But so too, at least spiritually speaking, is it in almost all his films. In Nosferatu, for example, Orlok, clearly attracted by the handsome Hutter, spares him to stalk, instead, Hutter’s wife Ellen, who gives up her life to keep the monster near her until a beam of sunlight turns him to dust; Gretchen, similarly, must give up her life for the sexual debauchery of Faust; although the protagonists of Sunrise both survive, they both first symbolically die, as the husband plots his wife’s death and, ironically, when he abandons his plans, seemingly drowns.


Yes, Tabu in its use of natural space and amateur Tahitian actors (Matahi and Anne Chevalier) as the young lovers, The Boy and The Girl, is superficially different from these earlier works, but underlying these cinematic shifts is a similar story. The film, much like Nosferatu descends upon the neck of Hutter, spends much of its early frames in homoerotic voyeurism of the young native boys at play, the directors’ camera almost languishing over the shirtless and semi-pantless Matahi as he spears fish, before wetting all the male characters down in the surges of the surrounding sea and slides in the flow of a nearby waterfall, the focus particularly attending to their wet buttocks. It may be some of the most sensuously sexual filmmaking outside of the porn industry. It is no surprise that Robert J. Flaherty, more interested in anthropologic specificity, would come to abandon this project.


Yet Murnau knows his audiences, and soon steers his story into an intense romance between Matahi and a naive girl, Reri, who is as beautifully feminine and Matahi is masculine. The arrival of outsiders, carrying the aged warrior Hitu, destroys their joyful innocence, however, as the old man accepts the young virgin to replace the now-dead ceremonial figure as a bride in Tabu, a kind of goddess that demands she is free of all touching, longing, and lustful gazes—precisely what she and her young man have just enjoyed. 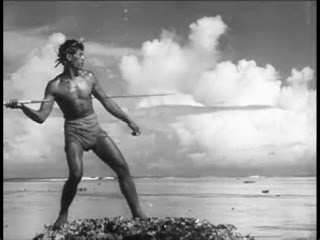 The ceremonial dances performed for her leaving them represent, perhaps, some of the steamiest dancing ever brought to the wide screen, as the young bare-chested maidens surround Reri while oggling the young men in grass skirts provocatively swaying their hips. Even in his complete despair, Matahi cannot resist joining the other boys, drawing the new goddess into an intense dance that might be seen to break the Tabu even before she departs.


The young lovers determine to leave their island paradise that very night, moving on in their small boats for several days until they reach a distant, seemingly more civilized island, where Matahi becomes a pearl-diver, the couple living in a simple hut upon the beach. With his natural athletic skills the boy is a natural, and soon returns with a pearl, celebrated in wild abandonment at a local bar—without the couple even perceiving that they have footed the bill. 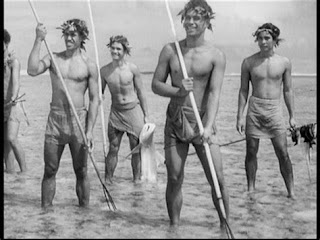 Time passes as the two fall ever deeper in love, but we perceive the consequences of their illegal rapture. Reri receives a message from Hitu, demanding that she leave the island and return to him within three days. When the couple attempt to book passage on another ship that might save their lives, they discover themselves to be deeply in debt that they cannot afford to travel. If this is a safer place, it is far less “civilized” than their original paradise.


Throughout the torturous night, they hold one another in terror, Matahi secretly determining to dive in that next morning in another arena of Tabu, a deep cove where the pearls are protected, so the natives believe, by a giant shark. Many men have been killed in their attempts to dive there. 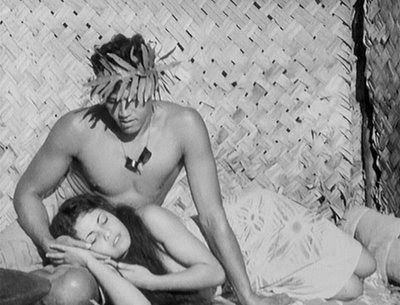 That morning Matahi sneaks out to dive into the Tabu region, and in a stunningly filmed sequence in which we glimpse, only momentarily, his body against the shimmering reflections of water, he returns with what is apparently a black pearl; he has survived. In his absence the shadow of Hitu, like Nosferatu’s shadow hovering over the innocent Ellen, has come to claim Reri. She is taken to his boat. When Matahi discovers the fact he bravely attempts to swim after, but almost reaching the rope that might help him recapture his bride, we observe a knife in the hand of Hitu cutting the connecting line. The boy swims for a short while longer before finally disappearing into the surrounding waters. Death has taken love one more time.


In short, even if this film might be recognized as a transformative shift that might have occurred in Murnau’s great filmmaking, it remains, at least structurally, apiece with his previous works—all films that, as Alexandre Astruc has described as a “fatality hidden behind the most harmless elements of the frame.” Even the paradisiacal sunlit world of Bora Bora contains dark shadows that sever the lover from the object of his or her love. It is almost as if Murnau, at a time when he might have most enjoyed the fruits of his brilliant career, foresaw that love—or at least sex—would inevitably lead to self-destruction.