On the surface Koster’s handsomely filmed picture is a pleasant, if somewhat glib Christmas fantasy, replete with a harp-playing angel, a singing boy chorus, a sweet young girl, an ice-skating taxi driver, a troubled Episcopal Bishop, and his stunningly beautiful wife. With a cast that includes Cary Grant, David Niven, Loretta Young, Monty Woolley, James Gleason and Elsa Lanchester, the film was a cinch to please its audiences from the day it was canned. At our home, we watch it every Christmas with pleasure.


But this time, seeing this film a few days before Christmas, I was struck at just how odd this fable truly was. Grant, as Dudley the angel, has never given a smoother performance, Niven, playing Bishop Henry Brougham, has never spoken his lines in a more precise British accent, and the dulcet-voiced Young has never beamed more gloriously; you can almost swim in her gaze. Only the stentorian-voiced Woolley and the gravelly-throated Gleason bring any seeming variation to the tones of the work, but even their words mostly reveal their kindness and caring. The plot and acting seem defined by everyone’s utter placidness.

Yet early in the film, upon first meeting the Bishop, the angel sent to help him in his difficulties in creating a new cathedral, says something rather shocking. Explaining to the Bishop that there are many angels visiting people every day, Dudley notes that while walking the streets of the city you may look into the face of stranger; “It may be the face of a murderer or the face of an angel.” This dichotomous reality presented in a film in which the most villainous person portrayed is a stubborn wealthy woman who wants the cathedral built, in part, as a memorial to her late husband, seems out of place, even jarring. Are there that many murderers wandering the streets of what is apparently New York, but appears in the Goldwyn studios as a small, New England city? 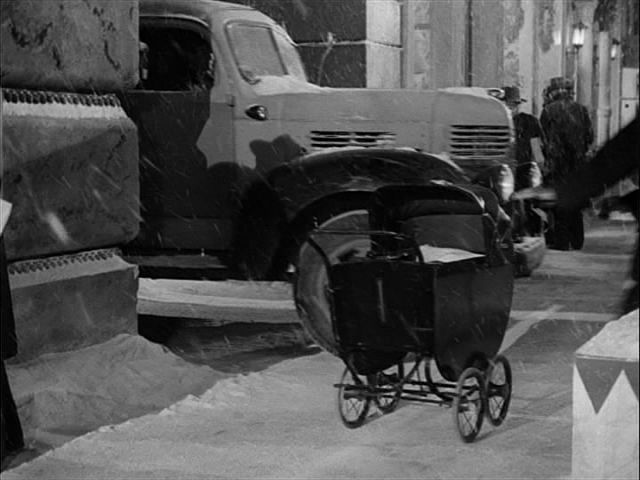 Certainly there are a lot of dangerous traffic hazards to be witnessed. A blind man can hardly get across the street until Dudley takes his arm. A woman with a young daughter nearly loses her child in a baby carriage to a collision with a truck—again until Dudley grabs the carriage moments before it is struck. Cars lurch to a halt several times as Dudley crosses streets, almost striking Woolley’s Professor Wutheridge. It is certainly dangerous city, whether or not there are many murderers and angels stalking it.
Suddenly I began to remember and observed over the course the film, all the strange things that do occur in this work, events that seem in opposition to the seeming gentle spirituality of the tale. One of the first dialogical encounters in the film, for example, involves the Professor and an Italian shopkeeper (Tito Vuolo) haggling over the price of a Christmas tree, even stranger given the fact that the Professor is a non-believer. Soon after, Dudley introduces himself to the Professor as a long-time friend, an out-and-out lie. An angel caught lying?


Perhaps not so strange when we soon perceive that this particular angel quickly falls in love with the Bishop’s wife, and she, perhaps unknowingly and feeling neglected by her busy husband, in turn, nearly falls in love with him. But then Dudley generally has that effect on women; even the maid Matilda (Lancaster) and the slightly old maidenish Bishop’s assistant, Mildred Cassaway (Sara Haden) develop crushes on the stranger who quickly takes on the job as the Bishop’s secretary. Certainly the Bishop’s little daughter, Debby, falls for the angel.


An entire boy chorus comes together to beautifully sing at his bidding. A taxi driver, picking up Julia Brougham (Young) and Dudley, mistaking them for husband and wife, turns off his meter and joins the couple as they frolic in a skating rink in a public park. As the couple briefly hold hands at a local restaurant, three elderly women from the church quietly tsk their behavior until Dudley invites them to join him and Julia. The Professor, we later learn, has been lying about his completion of his great history he has claimed to be writing: he has not even begun the research. There must be something in the air that forces these figures to not fully reveal their lives.

Perhaps in reward for his lack of focus, Dudley provides Wutheridge with an endlessly refilling bottle of sherry. The ancient coin that the Professor thought was worthless, so Dudley tells him, is an historical treasure, minted to celebrate the arrival of Cleopatra in Rome. Soon after the slightly inebriated Professor can suddenly read a text previously indecipherable to him, a strange magic delivered up by an ambassador from God! In this odd film, spirituality and love get confused with miracles, while religion is associated with greed and selfishness. It’s almost surprising that, upon its 1947 premiere, American clergymen did not rise up and denounce the work as slightly satanic.


The Bishop has lost all his sense of pleasure in life through his determination to build a new cathedral. His first words of the movie are critical of his ever-loving wife. The force behind the building of the new cathedral, Mrs. Hamilton (Gladys Cooper) is presented as a kind of witch, determined to get her way or ruin the career of the Bishop himself. Finally defeated, the Bishop visits Mrs. Hamilton only to find that apparently Dudley has been whipping up another magical trick. As Henry rises to leave, he cannot rid himself of his chair, an almost surreal suggestion that he is now permanently attached to the old battle axe with whom he has continually fought. It is, in an odd way, almost a sexual event. Ultimately, he must call home to ask for a new pair of pants!

Dudley’s visit to her is even more unusual, as he almost courts her, playing the song of a young lover whom she has rejected years before she married the husband whom she never truly loved. Helping her perceive that her grand plans have been hatched primarily out of guilt, Dudley now completely betrays his employer, convincing her to charitably give her great wealth to the needy instead of constructing the grand religious temple she had planned. To be fair, when Henry states he was praying for a cathedral, Dudley reminds him: “No, Henry. You were praying for guidance.”


In short, however, what at first seems like a placid Christmas fable, must be recognized as a kind of insidious battle between a different kind of good and evil from what we might have expected, almost fulfilling the dichotomy that Dudley first laid out: the indistinguishable faces of the murderous and the angelic. The first seems to be aligned with power, money, and religion more than with death, while the second embraces love and the magic of everything in life. By the time the film reaches is strange conclusion, all the characters’ memories have been wiped away, as Dudley determinedly leaves, having begun to envy his human counterparts. The Bishop reads the homely sermon, written for him by the angel, without even recognizing that it is not his own words.


The Christmas we are left with, as in that other Yuletide fable of the same year, Miracle on the 34th Street, less concerns the Christ child whom the Bishop sermonizes should be our focus, than the “gifts” this all too human angel has left behind: a lovely Christmas tree, a new hat, a pleasurable lunch in a favorite restaurant, the new-found acceptance of a young girl, an never-empty bottle of sherry, and a final masterwork in an scholar’s long career. Oh yes, and the enduring love between the Bishop and his wife. Aided and abetted by the angelic visitor, this is the world of Santa, not of the Holy Spirit.


Apparently there was no trailer for this film, so the actors suggest in a brief introduction to our tape. The producers wanted to keep the secrets of the film until the audience watched the movie in the theaters; I suggest they kept some even darker secrets from themselves, for the angel of this film, as he himself admits, has no wings, and almost symbolically murders the love he was sent to protect. One can only wonder how much of this script was the product of the original writers—whose film, so Hollywood lore has it, was disdained by its audiences—or created by its uncredited writers whom Goldwyn brought in for rewrites, the later highly successful director Billy Wilder and his collaborator, Charles Brackett.