goethe and auschwitz
by Douglas Messerli


It is mid-April 1945 in which Wolf’s fascinating film begins. From the viewpoint of the Russian troops near Berlin, we hear a young man with a P.A. system speaking in German to Nazi soldiers who have not yet surrendered. They are told not only of the hopelessness of their cause, but that if they surrender they will be protected, saved from certain death. There is no one visible on the scene, a forlorn-looking lake, except for a small boat upon which a gallows has been constructed, a body hanging from it with a sign around its neck: “DESERTEUR Ich bin ein russen knecht,” “Deserter! I am a Russian lackey.”


Indeed the young man speaking on that P.A. system, Lieutenant Gregor Hecker (Jaecki Schwartz) might almost see himself in the dead man’s visage, for Hecker, whose family escaped at the beginning of the war to Moscow, now fighting with the Red Army, is of German heritage, a nineteen-year-old boy who was born, much like director himself, in Cologne. His German background and his ability to speak German is why he has been assigned this role, and probably why he is traveling, like a human mascot, sleeping against the shoulder of Wadim (a Russian teacher turned soldier) (Vasilil Livanov), and sitting, at other times, next to the music-loving Sasha (Alexej Ejboshenko), Gregor’s easy-going superior.
By the very next scene, as the soldiers reach the city of Berneu, near Berlin, Gregor is called for by the troop’s Commander, he is suddenly transformed into a Commandant, ordered to take over the city, transforming the few remaining residents into law-abiding citizens of the new Soviet order. The immensity of his sudden rise in power is brilliantly realized visually by Wolf, as the young man stands in the middle of the street in utter confusion as reads, time and again, the written proclamation in disbelief. 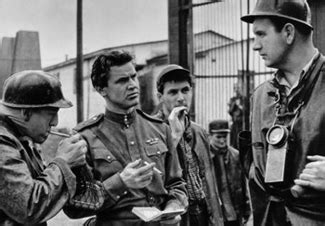 Throughout all of these early scenes Wolf creates tension simply by throwing his major figure into a series of vast responsibilities that nearly overwhelm the nineteen-year-old—and any sympathetic audience. Berneu, at first, appears almost like a ghost town, with only a young, frightened girl (Jenny Gröllmann) left. She has just witnessed the dead body of the woman she has lived with, a suicide victim, and is terrified of what may lay ahead for her in a city of occupation troops.


Well she should have been when one realizes, that, in fact, thousands of German women were raped by the Soviet occupiers, their fathers and husbands shipped out and lost in Russian Gulags. The closest Wolf’s film comes to this truth is the immense hostility with a Soviet woman soldier (Galina Polskich) greets the young girl when she comes to beg a place to stay near Gregor—certainly comprehensible when we realize he is the only German-speaking male left.  Terrifying the child, the Red Army woman gloats, “now, she too, is frightened.”


Due to Soviet cinematic restrictions—previous films by Wolf had been delayed or confiscated—the director does not honestly pursue any Soviet misconduct save the unnecessary murder of one discovered ex-Nazi. Here the Soviets, typified by Gregor, Wadim and Sascha, are presented as heroes attempting to find a way to save the Germans more suffering and to help them build a new country out of the horrors of the old. We might well describe this film, accordingly, as utter propaganda, were it not that one might imagine the East German audience of 1968 could read between the lines.


And those important gaps in the film’s story do not diminish the questions it does address: how to rebuild a nation of individuals who have been so perversely hateful, sadistic, destructive? To give Wolf credit, I Was Nineteen does explore some of the events of the concentration camps, presenting them through a kind of pseudo-documentary of the gas-chamber showers and descriptions of concentration camp life between cuts of the young Gregor showering, surely in an attempt to wash his own association with his German roots away. A later characters explanation the rise of Nazism as the German’s endless history of obedience to all leaders, and an declaration by one concentration camp survivor of the war as being a product of the manipulation of industrialists and corporations, however, is clearly inadequate. What Wolf makes clear is that Germany, East or West, can never free itself for rest of its history from the World War II events. If Germany might be associated with Bach, Goethe and other great artists and thinkers, it will also now be associated forever with Auschwitz. Any attempt to explain what happened to students of the future cannot escape the inevitability of speaking about both:


Through the character of Gregor, Wolf continues throughout this film to explore the tears of sensibility between the Germans and the Soviets—less in political terms than in very personal emotions, the pull of his roots and his detestation of his countrymen’s actions. Throughout this film, we encounter various types of Germans, including the honor-bound soldiers of a garrison about to be captured. Sent to try to convince the Nazi enclave to surrender, Wadim and Gregor nearly lose their lives. But ultimately, the Germans are necessarily convinced to abandon their impossible position. Logic, even in this absurd world, wins out.
In another scene, as their truck once again overheats, Gregor walks a short distance to a stream of water, suddenly discovering a lone German soldier, now blind, waiting in his overturned vehicle, certain that Gregor is one of his returned comrades. The painful confusion of this misled and certainly dying soldier, can only, once again, reflect Gregor’s own pulls between his native language and his role in life. Only the taste of a cigarette he hands the lost soldier reveals his origins: the tobacco is from the Caucasus mountains. But even then, the blind survivor presumes he has been serving as a German there. Finally, Gregor, no longer able to speak, walks off.

At a final outpost, where Gregor has been once again enlisted to broadcast to straggling German soldiers to give themselves up, we witness a similar standoff. This time reason again prevails, as dozens of Nazis surrender and are brought into protection at the farm where the Soviets have holed up. But, at the last moment, SS troops speed up in trucks, shooting down and killing their own men in order to prevent them from turning themselves in. In the shootout, Sascha is also killed.

Confused and passive for much of the film, Gregor suddenly accepting his own German background, also declares his allegiance not just to Soviet forces but to a kind international determination to track them all down, to destroy any Nazis still ready to destroy those who do not embrace their blind fury.


Throughout Wolf’s film, no matter how one might feel about its cultural forgetfulness, we are moved by his sensitive attention to the human beings caught up in this tragic battle: focusing on simple everyday acts, people simply speaking to one another and participating in the necessary activities of drinking and eating, singing, listening to music, washing, reading. Food is particularly important. In nearly every scene in the film, characters, Russians and Germans, eat, sometimes serving up simple meals, at other times, as in the grand Russian celebration, cooking up prodigious amounts of food. No matter how divided Wolf’s figures are politically, he presents them as human beings simply trying to survive. It is through that nobility of human expression that Wolf’s cinematic art ultimately becomes something more than a propagandistic tract.