Bernardo Bertolucci (screenplay, based on a novel by Alberto Moravia, and director) Il conformista (The Conformist) / 1970


Prismatically told, mostly in flashbacks, Bertolucci’s great film The Conformist is a devastatingly complex and ironic work about Fascism—both Mussolini’s Italian version and fascism in general—focused upon the figure of Marcello Clerici (Jean-Louis Trintignant). From the very beginning of the film, Marcello admits to a priest that he is marrying a course, bourgeoisie woman in order to gain “normality”:

Marcello: I’m going to build a life that’s normal. I’m
marrying a petty bourgeois.
Confessor: Then she must be a fine girl.
Giulia: Speak out. Go ahead.
Marcello: Mediocre. A mound of petty ideas. Full
of pettt ambitions. She’s all bed and kitchen.


And with his friend, Italo (José Quaglio), he reiterates the connection between the petty bourgeois and fascism:

Italo: A normal man? For me, a normal man is one
who turns his head to see a beautiful woman’s
bottom. The point is not just to turn your head.
There are five or six reasons. And he is glad to
find people who are like him, his equals. That’s
why he likes crowded beaches, football, the
bar downtown….
Marcello: At Piazza Venice.
Italo: He likes people similar to himself and does not
trust those who are different. That’s why a normal
man is a true brother, a true
citizen, a true patriot…
Marcello: A truce fascist.


In fact, Marcello has petitioned the Italian Fascist government to allow him to join them as an underground spy and informer.


Yet, as the Fascist head rightly perceives, Marcello is not at all a “normal” man. His father, living in Munich, took him to a bierstube as a child, in which “a nutty man” spoke about politics. “They’d buy him beer and encourage him. He’d stand up on the table making furious speeches. It was Hitler.” As an adult, the father is committed to an insane asylum. 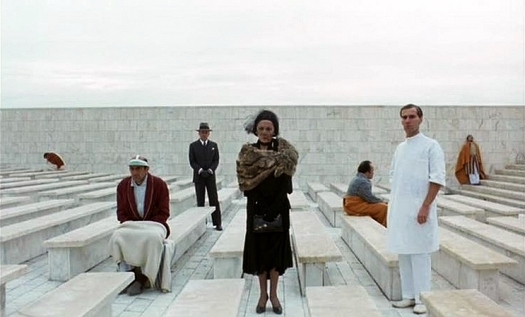 Marcello’s mother lives in a decaying villa, where she is having an affair with her chauffeur, who brings her morphine to maintain her drug addiction. 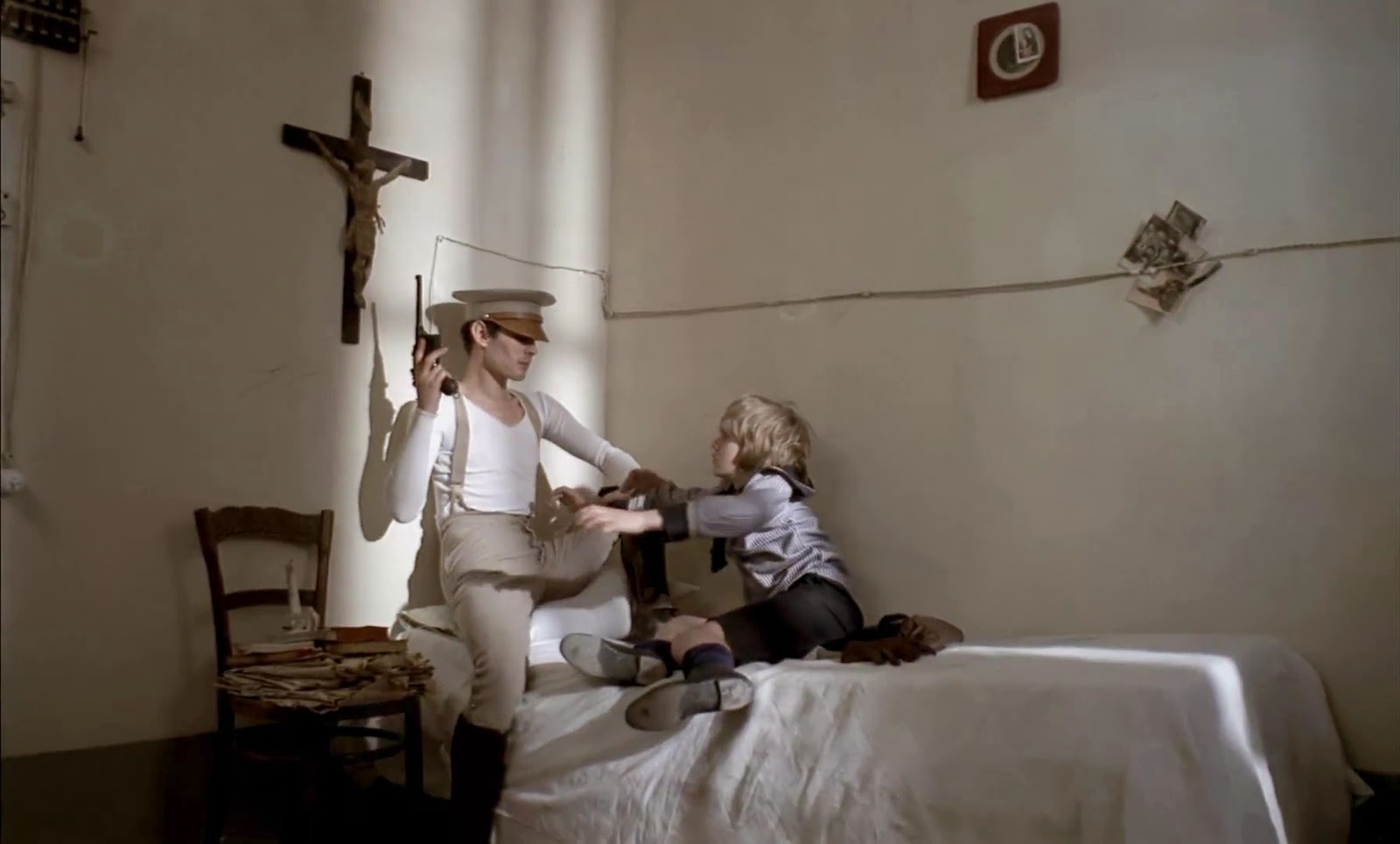 By bits and pieces, through memories and confessions, Marcello reveals that as a child he was not only abused by local boys, but sexually accosted by another family chauffeur, Lino (Pierre Clémenti). After the sexual event, the child, Marcello, grabs the accoster’s gun and shoots him, believing he has killed him.


Even as an adult, now assigned to journey to Paris with his new bride, Giulia (Stefina Sandrelli) where he is ordered to seek out a former professor, Quadri (Enzo Tarascio), and kill him, Marcello finds a world that is anything but “normal.” Although they both know the reason for Marcello’s visit, both the Professor and his beautiful young wife, Anna (Dominique Sanda), entertain the couple and toy with them, the result of which Marcello falls in love with Anna, while Anna sexually attends to a delighted, and not so ordinary, it appears, Giulia. Consequently, Marcello is unable to act, ultimately giving up his gun the Fascist thug, Manganiello (Gastone Moschin), who has been assigned to follow him. As desperate for conformity as he may be, wherever Marcello turns he is met with what he perceives as decadence, eccentricity, and perversion. 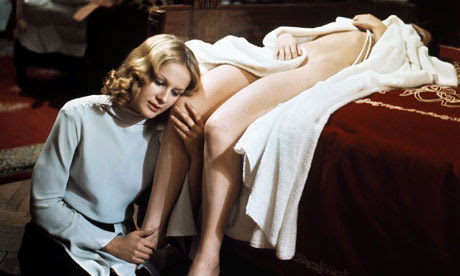 Bertolucci, accordingly—although sympathetically committed to the anti-Fascist Quadris—links one to the other, the decadence and perversions of the culture, just as in Pasolini’s nearly unbearable Salo, to the conventionality and conformity of Fascism. Mussolini rose to power, the director suggests, precisely because of the sexual and social extremes of a failed society. 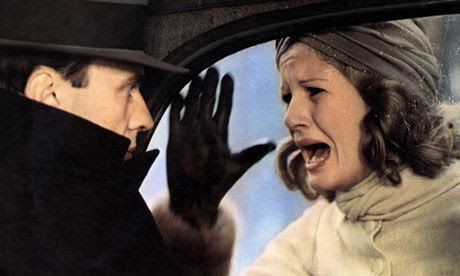 If Bertolucci’s and Moravia’s psychological assumptions appear, at times, far too simplistic, in the example of Marcello they become more complex simply because he is a man caught between these two seeming extremes. Both a product of the pre-war decadence and a man seeking moral simplicity, he cannot live in either world. Throughout most of the film he is observed attempting to chase down and save his new lover, Anna, Quadri’s wife; but when he finally catches up with her, he is forced to become—at least, has no other choice than to remain—a passive voyeur to the Professor’s and her deaths as Manganiello and other Fascists chase them down, slashing them over and over again with knives. Perhaps the most painful moment of the movie occurs when Anna, perceiving her own danger, races from the car, hoping to be saved by the car following them, wherein Marcello sits. Her former lover, however, will not even open the window, as she turns in horror towards the woods, betrayed by the very man whom she and the professor were convinced was far “too serious” to be serious.


At Mussolini’s downfall, we once again catch up with Marcello, now a conventional Italian, with a wife and child. He has been asked to meet with his old friend Italo—who we now recognize was another exceptional being, in his blindness, of Marcello’s past. Guilia begs him not to go out, fearful that, as a former Fascist, he will be in danger:

Giulia: What are you going to do now?
Marcello: The same as everyone else who thought
like me.When there are so many of us, there’s
no risk.
Giulia: Marcello, don’t go out. They could hurt you.
Marcello” I won’t be in danger. After all, what have
I done? My duty.
Giulia: But why do you want to go?
Marcello: I want to see how a dictatorship falls.


As he encounters his former friend, the two overhear a conversation between a starving young man and an older man who claims that at his house they have lots of provisions, quietly attempting to seduce the boy with a gentle stroking of his foot. Suddenly Marcello recognizes the older man: it is Lino, the chauffeur who made love to him. Like a rhinoceros out of Eugène Ionesco’s dramatic fable Rhinoceros, Marcello roars out, defaming him as a Fascist, a homosexual, a pervert—even turning upon Italo with his public declarations.
Both Lino and Italo race away into the night, while the man who would have liked to have been a Fascist, a conformist, one of the everyday men in life, remains, hovering against a street fire as he stares into the face of the young boy Lino has left. Marcello is an outsider no matter

which way he turns, but, more importantly, he is now a man who cannot return to the conventionality he has attempted to embrace. 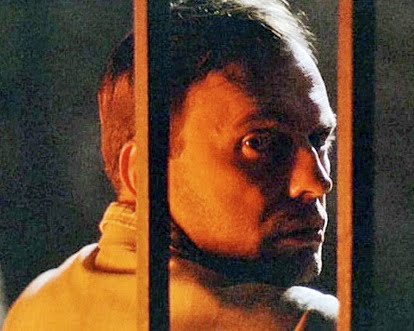 Bertolucci’s beautifully filmed fable, recreating the costume and feeling of the time, alternatively engaging us in subtle variations of rich color and cool black-and-white, has transformed Moravia’s more polemic work into a rich tragic-comedy in which Marcello comes to be seen, almost as in Fellini’s films, as a well-suited clown, a man both at home and completely at odds with the world in which lives.