stepping on him
by Douglas Messerli

Leonard Spigelgass (screenplay, based on a story by Damon Runyon), Irving Reis (director) The Big Street / 1942


Watching The Big Street again the other day, I was struck at just how close to camp this film was. Indeed, had Runyon gotten his desire to star Charles Laughton and Carole Lombard in the lead roles, the film would fallen off the cliff of ridiculousness; as it is it might have been the perfect target for a Charles Ludlum play. 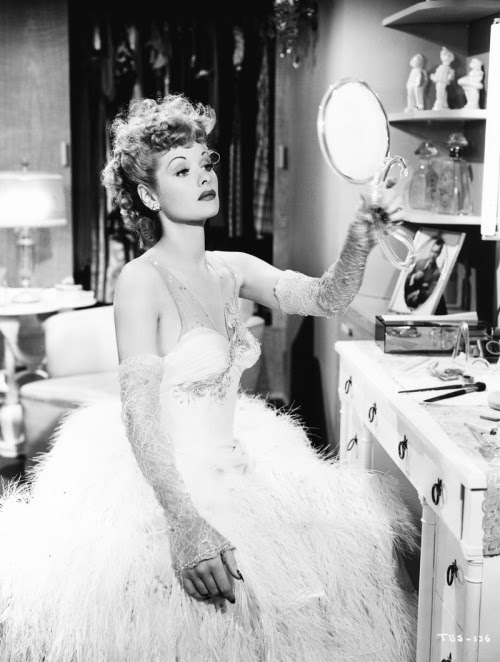 Lucille Ball’s characterization of the mean-hearted and slightly course, money-grubbing night club singer, Gloria Lyons, is almost “over the top,” as she attacks her maid Ruby and a busboy, who in the first scene has saved her dog.  Soon after, she turns on her current boyfriend, the local mafian, Case Ables (Barton MacLane), trading in his favors for the wealthier society cad, Decatur Reed (William T. Orr). His gruff reaction, hitting her in the face, sends her hurling down a staircase and into a hospital bed as a cripple.


Fortunately for her, she has the secret admiration of Little Pinks (Henry Fonda), the busboy, who secretly sends flowers and, with Ruby, sells Gloria’s jewels to pay her hospital bill. When they run out of trinkets, Pinks moves Gloria into his own tiny room. Forgot the absurdity of situation: in 1942, evidently, any sexual activity between the two in that snug little apartment was not even a question. It’s only because Fonda is so straight-forwardly serious and honest-Abe-faced that the script doesn’t evoke giggles. What’s more, there are plenty of Hollywood character actors, including the wonderful Agnes Moorehead as the thin but heavy-eating Violette Shumberg, Eugene Pallette as her unexpected boyfriend Nicely Nicely Johnson, a dynamic Ray Collins as Professor B, and Sam Levene as Horsethief, who distract our attention from Pinks’ moonstruck antics. These down-and-out figures, featured in many a Runyon tale, are seen here somewhat beyond their prime, mostly semi-retired from their former shady lives. They hardly have enough money to gamble. But they are legitimately humorous and, as always in Damon Runyonland, entirely loveable. 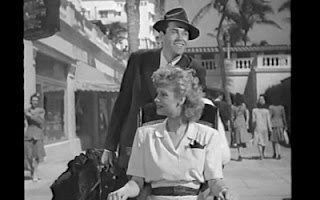 When Gloria sends these men and women, Pink’s loyal friends, packing, she might be compared to Dorothy’s Wicked Witch. Defiantly, Pink loves the ungrateful singer, to whom he subserviently plays Jeeves, even mimicking the role of butler he’ll be expected to bcome once she gets well and traps Decatur!  Yet things get even stranger when she suggests that the poverty-stricken bus boy wheel her down from the big street of New York City to Miami where she can get warmed up and meet up with Decatur once more.


Of course, and to prove it, there’s Pinks behind her wheelchair trying to enter the Holland Tunnel. To settle the confusion of the toll taker and nearby police officer, a truck driver gives them a free ride to Washington, D.C., but the rest of it, apparently, is up to them!


Fortunately, the plot has arranged for Violette and Nicely Nicely to marry and move down to Miami to run a hot dog stand! Despite her dismissal of Pink’s friends, at least Gloria at least has a place to stay. Violette, having given up trying to make sense of Pink’s love interest, even hands over enough money so that he can buy Gloria a little something in which she can lay out on the beach hoping to attract Decatur’s attentions. Miraculously swimming nearby, he quickly spots her as the two strike up a conversation as if no time has passed; but when he encounters, by accident, Gloria soon after in her wheel chair, it’s curtains for that affair!


To call her ungrateful would be like suggesting that Camille has a little cold. Runyon and Spiegelgass diagnose her problem as “paranoia,” but their definition of that term is a bit odd: “It’s what happens to people when they get to believe they’re something they’re not.” Well, perhaps…. Surely her “highness” has never been very serene, as she finally, in a fit of madness, sends even Pinks away. But like the “worm” she’s described him as, he faithfully returns when told by Violette that Gloria is deathly ill.


If it’s been hard, so far, to perceive any credibility in this fantastic tale, we now have to stretch out imaginations even further. For, although Pinks has found a job, it’s in a casino owned by Gloria’s former mafia friend; meanwhile, for some inexplicable reason, nearly all of Pinks’ gambling friends have descended upon the “Magic City.” True to form, Gloria has another delusional vision: she’s in a large hall with all of Miami society, dancing at a special event dedicated to—who else?—herself.


To make it all come true, the formerly honest Pinks turns to robbery, stealing a gown and— after overhearing an attempted con-game involving the same woman’s jewels—pockets several diamond necklaces, before demanding the couple hand over rubies from another heist. With the evidence of the rubies in hand, he approaches mobster Ables, behind the swindle, with a deal he cannot refuse: throw a big party for Gloria or he’ll straight to the police!


Once again Pinks’ old friends attempt to throw a shindig for the unappreciative Gloria. Ozzie Nelson and his band accompany the songstress in yet another version of her famed “Who Knows,” and Pinks sweeps her up into a waltz by allowing her, quite literally, to walk all over him, her feet planted firmly on the top of his! One last wish—she wants to see the ocean—is granted by the incredibly, incredibly nice Pinks, who picks up his now dead lover and takes up a grand staircase for a midnight look at the sea. The end.


I can see it now: Carole Lombard hanging on the hulky mass of Laughton! That surely would surely have brought down the house!