Jack Smith Flaming Creatures / 1963 / The screening I saw was presented with a talk by J. Hoberman at The Roy and Edna Disney/CalArts Theatrer (Redcat) at the Walt Disney Concert Hall on November 9, 2009.


For years I'd been hearing about the sensational film Flaming Creatures which seemingly influenced filmmakers and dramatists from Andy Warhol, John Waters, and Federico Fellini to Cindy Sherman and Richard Foreman. 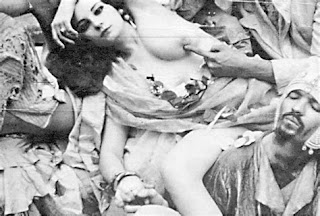 From the beginning, after its New Bowery Theater showing in 1964, screenings were rare, and in the late 1960s Smith took the film out of circulation. For all these years, accordingly, I had been seeking an opportunity to attend a rare showing, and despite the fact that I was scheduled to teach a literature course on November 9th, I arranged from the first day of class that we would skip the week in question.


Listening to J. Hoberman's historical recounting of the film, which was deemed pornographic on its release and was denounced in the media and even in the halls of congress (one congressman being outraged that it was not even being good pornography (evidently he couldn't get an erection"), it is difficult not to let out a hoot of laughter. 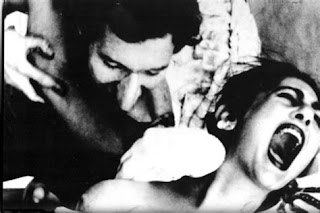 Indeed, in today's world, Smith's orgiastic figures of mostly gays and transvestites seems almost innocent. Yes, from time to time, one or another shakes a flaccid penis in the camera's face, but, for the most part, the figures of this pastiche of scenes and music reminiscing from Maria Montez to Josef Von Sternberg's films and numerous other popular cultural references, seems utterly innocent. Hoberman himself describes the film in those terms:

Flaming Creatures' forty-five washed out, dated minutes
depict a place where a cast of tacky transvestites and other
terminal types (some costumed as recognizable genre
faves—a Spanish dancer, a vampire, an exotic temptress),
accompanied by recordings of popular music, shrieks, and
snatches of Hollywood soundtracks ("Ali Baba is coming!
Ali Baba is coming!") dance, grope, stare, posture, and wave
their penises with childlike joy. The marriage
of Heaven and Hell presented with playful depravity.


The creatures in Smith's film are aflame with buried desires—blindingly bright passions to show off, to love, to dance, to cry out, perhaps even to die—the creatures burning up before our eyes. What makes this film so troubling to some I believe is that it is almost a screed simultaneously to life and to extinction, a kind of mad portrayal of Heaven and Hell: not St. Peter's Heaven paved with good acts nor Lucifer's burning inferno but internal heavens and hells within each of us, often so potent that coherent language and expression cannot be reached. Smith himself described the work as "a comedy set in a haunted movie studio," which at first, given the very ludicrousness of the actor's portrayals, I dismissed.


Clearly, however, there is something comical about the full throttle simmering of this heap of human flesh at the center of the short film. And yet, it is a haunted, ghostly world left behind by the cheap and gaudy reality that Hollywood directors have awarded us as alternative spaces in which to exist. And in that sense Flaming Creatures is an inevitable product of filmmaking itself. In a strange way this silly, tawdry, outrageous depiction of a hopped-up bacchanalia is no more or less unbelievable than hundreds of scenes from Cecil De Mille epics such as his 1949 Samson and Delilah, Bible-tales turned into fantasylands for a world of displaced souls.