From the very first scene of Jean Vigo’s short feature, Zero for Conduct, the director establishes the battlegrounds, as two young boys traveling by train to return to their boarding school, take out their new “toys”—in a sort of menacing version of “I can do better than you”—before pulling out cigars, lighting up and smoking—all in the presence of a sleeping adult, who, as the train stops falls to the floor, described by the boys as a “dead man.” The sleeping man is their new teacher, who, although more spirited than the soulless freaks who also teach at the boy’s school, is clearly, in their minds, already dead.


The two boys, Caussat (Louis Lefebre) and Colin (Gilbert Pruchon), join their friend Bruel (Coco Golstein) and a new “pretty” boy, Tabard (based, so it is reported on Vigo himself)—ogled and touched by several teachers—who befriends them, to immediately plan a revolt. The various “professors” include the dwarf headmaster, a slimy supervisor who follows the children about to spy on them and steals their possessions, an obese chalk-covered science teacher, and mindless housemaster, whom the boys, in their later orgiastic march of rebellion, tie to his bed, upend it and, symbolically, crucify him. Only the new teacher, who entertains them with drawings and a Chaplinesque strut around town, shows any possibility of offering them an education. 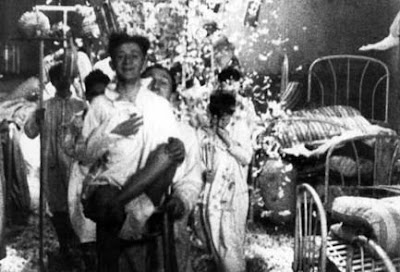 Through most of this 41-minute film, the boys do little but conspire, as they, like school boys everywhere, pass notes, secretly meet, magically escape from one teacher’s attention as they march through the city, and are awarded seemingly endless “zeros for conduct,” restricting them to the school even during weekends.


Yet, by framing everything through the eyes of the boys, Vigo creates a magical landscape which seems to be always fulminating with real violence and a sense of wonderment. The ease in which the boys slip in and out of beds, climb into and of mysterious windows, and simply mock their superiors behind their backs is in stark opposition to the freakish inadequacies of the adults, making the film seem both comic and slightly horrifying at the very same moment.

The revolt is planned for the school’s commemoration day, but gets underway, apparently, the night before as what begins as a pillow fight among the school’s boys suddenly turns into a mock procession—not unlike the mardi gras celebration in the director’s À Propos aux Nice—as the camera goes into slow motion, a snowfall of feathers streaming down upon everyone. It ends, appropriately, with the crucifixion I described above. 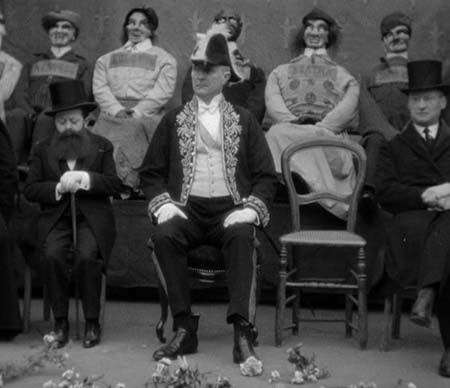 The commemoration ceremony of the next morning, presided over the Toulouse-Lautrec lookalike, seems to have no children in attendance, merely stuffed dummies, representing various French dignitaries. The young foursome is seen moving, by rooftop, off into the distance, seemingly having escaped their insane oppression.

The freshness of his vision, combined with Vigo’s obvious distaste for authority, helped to get this film immediately banned after its showing in 1933 in Paris for “creating disturbances and hindering the maintenance of order.” It would not be rediscovered until 1945, and was not shown again until 1946, twelve years after Vigo’s death. But its influence has been extensive, with François Truffaut paying homage to it in his The 400 Blows and Lindsay Anderson using its structure for his If….