cemetery of garbage
by Douglas Messserli


Given the rhyming title of the Neapolitan crime group Camorra, Gomorrah is a rambling narrative of five different sets of characters in and about Naples, all of whom can be tied to the notorious gangs of that region, and all of whom are destined to kill or be killed themselves.


The film centers—if there can be said to be a central focus—on a young boy Totò (played by Salvatore Abruzzese), a wide-eyed urchin living in the vast apartment compound Vele di Sampi where most of the film's action takes place. Totò's mother survives through a small grocery, and as a delivery boy for her, Totò visits various units of the apartment complex, getting a close-up view of more violence and suffering than any child should have to endure. Like other, slightly older children of this world, he clearly sees the violence around him as a natural phenomenon. 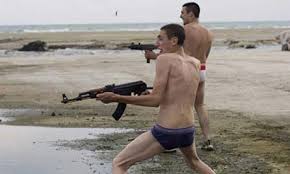 Two other boys, Ciro and Marco, soon to be young adults, play a kind of theatrical game of imitation, miming scenes and imaginatively recreating the events of the American gang movie Scarface. When these boys later discover a cache of guns and other weaponry hidden by the Camorra at a nearby farm, they turn their games into deadly action, shooting up the empty backwaters of their neighborhood. Garrone's film relies more on memorable images than upon a coherent story, and one of the best of these is a scene in which the two boys, stripped to their underwear, meaninglessly shoot off their Uzi's in mad imagination of the day when they will overtake the local Don—a wretched unshaven and (so the boys claim) unclean thug whom it is not hard to imagine is a vulnerable as anyone else in this hellish spot.


Garrone refuses to glamorize any part of the Camorra. Hardly anyone, not even the wealthy gang leaders, live better lives than anyone else. And most characters are trapped in the confines of small, dark rooms, allowed to continue living by small financial handouts provided by the Camorra, some of which is put right back into the Camorra economy through the purchase of coke and heroin or a trip to the local sex club—the only pleasures this world seems to offer.


One of the major figures we fellow, in fact, is the money runner, Don Circo (Gianfelice Imparato), who, like Totò, is privy to each household as he delivers mob money to those deemed worthy of support. His job may seem, at first, to offer some sense of purpose or even power, but we soon discover, like everyone else, he too is forced to live life at the edge with the possibility of being killed by rival ("secessionist") gangs and being hated by those to whom he delivers the money for the mob's penurious offerings. As one recipient shouts each week, how do they expect me to live on this? Don Circo's attempt to leave the mob ends in another round of murders.


Even the local haute couture designer, given a contract to produce several gowns—including one, we discover later, that will grace the body of actress Scarlett Johannson on Oscar night—lives in near-destitution and all night working sessions. His top dressmaker lives so poorly that he is willing to sell his knowledge, night by night, to the owner of a local Chinese dress factory, who sneaks him in an out of the shop in the trunk of his car. As a so-called "traitor," he too is nearly killed, and escapes with his life only by leaving his previous occupation behind, becoming a truck driver. 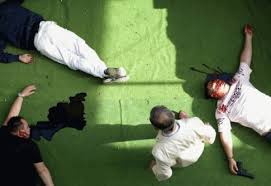 Perhaps the only man who seems to live life a little better than the others is Franco, who with his new assistant Roberto, plans to turn an empty quarry into dumping ground for garbage that will cover over a bed of dangerously toxic containers of chemicals. When one of the truck drivers delivering the barrels has a mishap, bleeding and fearful of the chemical's effects, Franco unflappably orders the regular drivers out of the trucks, temporarily leaving the scene to bring back young street boys who are more than happy to drive these mammoth machines down to the pit where they will be dumped. When a local farmer, who has previously sold Franco land offers him pears, Franco kindly accepts them, but once on the road demands Roberto dump them: they are polluted like all the land of Campania thereabouts. Roberto (perhaps a stand-in for the author, Roberto Saviano), refusing to rejoin Franco in his determined destruction of the region, is perhaps the only individual in the film who escapes unscathed—although in real life Saviano must live in hiding, fearful of the mob's wrath.


It is inevitable, accordingly, that the young, innocent Totò must ultimately be entombed in the Camorra's codes of behavior. Hit by a secessionist group, a younger fringe of the Camorra followers determine to kill the mother of a rebel. As a delivery boy, Totò is the only one for whom she will open her door. Desperately trying to remain uninvolved in these treacherous acts, Totò will not answer their query: "Are you with us or not?" But as he knows, there is no ground in between, and he has no choice but to call the woman out to her murder. 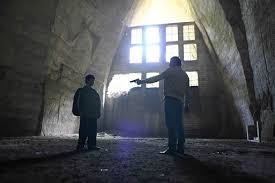 So are Circo and Marco lured to a country spot and shot, their bodies loaded into a forklift of a giant caterpillar truck and dumped, perhaps in the very cemetery of garbage created by Franco and his kind.


Dramatically speaking, Gomorrah is nothing but a mish-mash of different stories weaving in and out of each other, much like the unfocused images of Garrone's background figures throughout the film. Yet the implications of these character's purposeless acts, where human life has no more or less value than a bottle fly buzzing around a room, are absolutely mesmerizing and memorable.  The only time death means anything for the figures of this film is when the gun is aimed at their own heads. But as members of such self-destructive cultures everywhere, the moment they survive the heat, they seem utterly to forget—just like the boys who are told they have been transformed into men by letting a mob henchman shoot them, a bullet-proof vest pulled over them for probable protection, directly in the chest; the force of the bullet momentarily flattens them upon their backs, but eventually they stand up again to blindly face the bullets of another day. Let us hope that readers of Saviano's book and movie will remember, and help to put a halt to these internationally destructive acts.