Aki Kaurismäki’s 2011 film, Le Havre is an agreeable if slightly sentimental tale about a former author (André Wilms), who inexplicably has given up his bohemian life to become a shoeshiner in the famed French port. At one point the character mutters something about his line of work as bringing him closer to the people, but that does not sufficiently explain why this figure, Marcel Marx, who was featured also in Kaurismäki’s La Vie de Bohème (see page ___ in this volume) was named after the great Socialist thinker. But then the director also names several of his characters after famed French film figures. Marcel’s wife (the wonderful Kati Outinen) is named Arletty, after the music hall singer and actress in several of another Marcel, Carné’s pictures, the director who also set his La Quai des brumes in La Havre. A doctor in this movie, played by the French comic director Pierre Étaix, is named Becker after French film director Jacques Becker. The film’s detective, Monet, somewhat similar to the detective of Dostoyevsky’s Crime and Punishment, also reminds us that the artist Monet painted a series of Le Havre scenes, portraying the same foggy atmosphere of Carné’s. While several of these references, accordingly, do play a role in this film, it also appears that Kaurismäki simply enjoys the referential ricochets of these names. 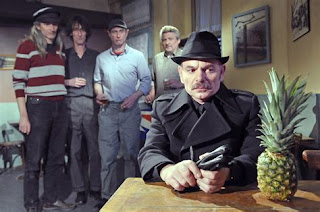 Strangely, while in the director’s earlier film Paris was portrayed as foggy, shabby town akin to Carné’s view of Le Harvre, Kaurismäki’s Le Havre is beautifully lit and, although a little shabby at the edges, is portrayed as a basically friendly city where Marx and fellow shoeshiner Chang (Quoc Cung Nguyen) stand placidly together as they greet train passengers who might desire a shine. Although he certainly does not make much money, Marx is rewarded free drinks by neighborhood bartender and the local grocer grudgingly allows him open credit. Spending only a small amount of his earnings, Marx returns home to the protective arms of Arletty and to his faithful dog, Laika (named presumably after the famed Russian dog in orbit), where he hands over his daily wages to his wife and is served up a restorative meal. When Arletty suffers what appears to be a heart attack, all neighbors come together in support. 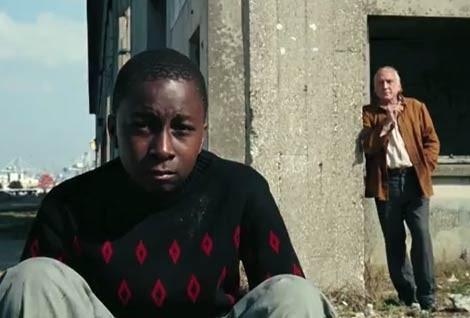 Similarly, when Marx encounters a young African boy, who has escaped police capture upon the discovery of several African would-be immigrants hiding in a cargo container, the old man feeds the boy and takes him in, again with the open support of his friends—despite the newspaper headlines demanding the boy’s arrest. Marx even goes to the length of traveling to Calais to find a relative of the boy, and despite his wife’s illness, which necessitates regular visits to the hospital, he is able put together a concert in order to raise money to secretly ship the boy on to London, where his mother apparently lives. Even the nosey detective Monet helps Marx to get the boy out of the country. In short, while in Carné’s Le Havre there is “no escape,” in Kaurismäki’s port city everyone helps the characters to be free themselves from the predicaments and limitations of their lives.


At film’s end, even Arletty returns home, miraculously cured from what she has been previously told was an inoperable condition. As fleeting as joy was in Carné’s world, here it is almost contagious. If neither Carné’s tragic vision nor Kaurismäki’s primarily positive presentation of life is very realistic, who cares? Such is the stuff of films and books!

Posted by greenintegerblog at 9:38 AM