key to the plot
by Douglas Messerli


Although Hitchcock’s 1948 film Rope was shot entirely on set, a New York apartment, his 1954 movie Dial M for Murder, although it contains a scene in a gentleman’s club and a vague montage within a courtroom, seems far more stage-bound that the earlier work. Every time I watch this film, in fact, I feel a sense of claustrophobia, in part, because in the small Wendice flat at 61A Charrington Gardens, the characters are for much of the film literally in each other’s faces, Tony Wendice (Ray Milland) intimately close to his cheating wife, Margot (Grace Kelly), Margot beginning the film with a kiss with her former lover, Mark Halliday (Robert Cummings), and, in later scenes, the murderer (Anthony Dawson) sprawling nearly on top of Margot, the Chief Inspector (John Williams) hovering over Tony’s every move.


This film also has very little suspense going for it: we know who the killer is and the man behind him from near the beginning of the work, and we know his motives. And, accordingly, there is little action. Tony Wendice hires Captain Lesgate (Swann) to kill his wife so that he might inherit her money and to punish her for her long ago sexual transgression. His plans for the murder, including his involvement with the former school mate, is painstakingly detailed, in a long patch of dialogue, by Wendice himself. And, although, the murder actually fails, due to Tony’s machinations Margot is found guilty of Swann’s murder and sentenced to death. Even detective writer Mark is able to see through Tony’s veil of lies. The only unanswered question is how Mark and, perhaps the Chief Inspector, will save Margot and discover the labyrinthine “truth.” In short, much of this film creaks with a plot that Tony himself announces is “unrealistic.”
Despite the work’s absolute staginess—or, one might argue because of it—this film works, mostly because of Milland’s delicious ability to placidly prevaricate, Cummings’ boyish loyalty to Margot, and Kelly’s gift of simply radiating a confused beauty.  And then there’s that hilariously complex plot to keep up all amused: Tony’s slow weekly withdrawals of bank funds to pay for the murder while hiding the fact from the police, his secret tracking of Swann, a shady character even in his schooldays who has committed numerous petty crimes against women before Wendice has tracked him down, and Tony’s voyeuristic stalking of the man at the dog races week after week. Add to that Tony’s accidental uncovering of Mark’s love letter to his wife, his fake blackmail attempts, the way he lures Mark into attending a stag party as a cover for his whereabouts the night of his wife’s murder, his planned-to-the-second telephone call to draw her out of the bedroom, etc. etc.—seemingly all for naught, since, when his watch stops, he’s late with the call, Swann nearly leaving, and Swann is murdered with scissors Tony has asked his wife to cut out articles from his past tennis career. 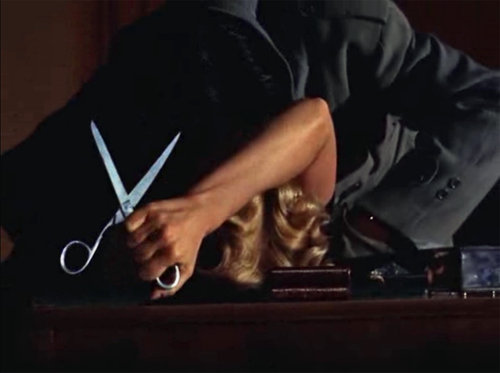 The only truly dramatic event of the film is the attempted murder, where Swann is poised over the intended victim almost as in act of sex before Margot, reaching for the scissors, thrusts them into his back, he impaling them even deeper with his fall to the floor. This scene is pure Hitchcock magic!


What follows is almost a purposeful unweaving of the whole fabric of Tony’s lies, as he redirects the very acts he has used to hide his involvement—including his silence on the phone, his insistence that she not immediately call the police, the discovery of money on the murdered man, and entry through the front door—upon his wife, freeing himself to guiltlessly end the relationship. Milland’s icy demeanor throughout makes him the perfect fiend. 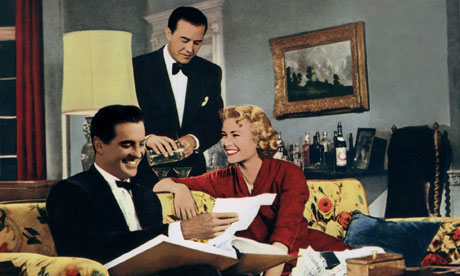 There is only one small element that has escaped this monster’s attention. The key found in Swann’s pocket, returned by Tony to his wife’s purse, is not the key to their flat, but to Swann’s own. Swann, thoroughly obeying Tony’s orders, has faithfully returned the house key to the rug upon the staircase outside the door. Since the inspector has switched raincoats with Wendice, and Margot, asked to return home, has no way to enter the flat; when the now keyless Tony checks the staircase, he reveals his guilt by his very entry.


Even now, however, Milland as Tony retains his cool, pouring himself up a large drink before, presumably, going off to prison and his ultimate hanging.