southern fried chicken
by Douglas Messerli
Sy Gomberg (screenplay, adapted from stories Damon Runyon by Albert Mannheimer), Harmon Jones (director) Bloodhounds of Broadway / 1952
In this 1952 mishmash of several Damon Runyon stories woven together in order to create a showcase for Mitzi Gaynor, the magic of Runyonland seems to have almost completely died out, the film beginning with a dirge-like torch song, sung by a somewhat dour Yvonne Dugan (Marguerite Chapman) to an empty chair. The famed Dave the Dude’s Club seems more like a morgue than a popular night spot. Indeed, gambling, so it appears, is about to come to an end! In the back room Robert “Numbers” Foster (Scott Brady) has called together his associates to explain the situation: they are all about to be called to testify before a Senate committee and plan to quickly forsake their beloved New York for the environs of Miami before disembarking for Cuba! Numbers’ girlfriend, Yvonne, will testify in their stead, carefully trained by a script held by Curtaintime Charlie (dancer-singer Richard Allen). 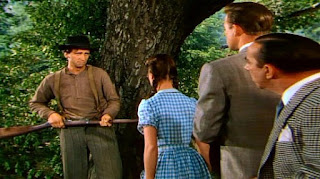 Accordingly, this empty fable begins with a boring and unrevealing “trial,” one of the mobsters repeating “I can’t remember,” while Yvonne, true to her man, perfumes the room with lies. Even the senators throw up their hands in boredom: the inquiry ends as quickly as it has begun!


Meanwhile, down South, since things have seemingly calmed down, Numbers hires a car piloted by the only truly funny figure in his work, Harry “Poorly” Sammis (Wally Vernon), to drive slowly back to the Big City, But Poorly’s poor driving skills sends them into the backwoods of Georgia, where they immediately encounter a gingham-clad Emily Ann Stackerlee (Mitzi) barnstorming over her granddaddy’s grave in a rousing chorus of funereal songs. As quick as you can say, “howdy, miss,” she invites the interlopers home for dinner, dancing up servings of candied yams and grits! Dinner, unfortunately, is interrupted by the gun-toting neighbor boys, Crockett Pace and his brothers, ending with Numbers, Poorly, and Emily Ann, along with her beloved bloodhounds, speeding off into the sunset!


If you think these events might be lacking some credibility, hold on! For Numbers, having been “calmed down” by Emily Lee’s singing, suddenly gets the urge to take her along to New York where he might “mentor” and see to her education, hankering, evidently, to play “Daddy Long Legs” to this innocent country gal. But wouldn’t you know, the minute they get the Big Apple, where Emily Lee is given up into the tutelage of show-girl Tessie Sammis (Mitzi Green), the green country kid suddenly becomes a 20-something woman who, it turns out, can sing and dance as good as any Broadway star. As they play out a kind of “I can do anything better routine,” Tessie, Curtantime, and Emily Lee irresistibly patter “I Have a Feeling You’re Fooling.” 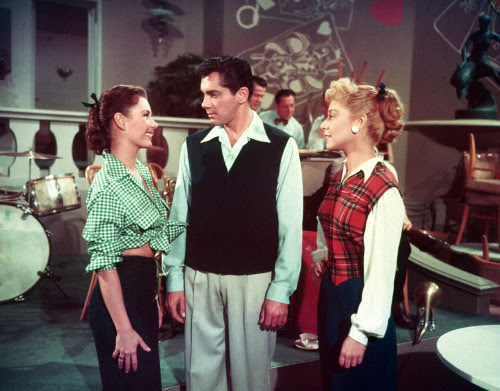 The rest of this silly pastiche is made up of cutsey routines for Mitzi—some of them quite entertaining—trouble-making explosions by the jealous Yvonne, and the confused reactions of Numbers, who, losing his idiot savant ability to multiply and add all combinations of figures, has fallen desperately in love without his knowing it. Stitching these threads together are scenes in which the dogs, now hooked on Poorly’s pills, roam the streets of Broadway and, more often fall into deep sleep; Tessie’s cheerleading support of her protégée; and Emily Lee’s never-ending attempts to feed everyone she meets. A second investigation into the gambling racket, sends Numbers into hiding once again, as his former reform-school friend, Inspector McNamara (Michael O’Shea) attempts to convince Emily Lee to save her lover from years in prison by making a deal: one year in prison for going straight! 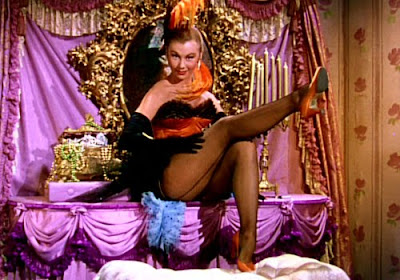 Screenplay writer Sy Gomberg and adapter Albert Mannheimer don’t give Runyon’s suckers an even chance. The Southern fried chicken, oily as it is, is served up cold. Numbers, upon his release from the slammer, and Emily Lee grow fat as an old married couple, hoofing their lives away. Isn'tit sweet?