A few years ago I wrote a piece on New York’s Lincoln Center’s revival of the Rodgers and Hammerstein musical, South Pacific, which I titled “Confused by Paradise,” centering on the US Seabees’, sailors’, and nurses’ difficulty in handling the very different values from their own they encountered in the south pacific islands to which they had been stationed. The musical version, I argued, was much more explicit in the sexual variances of its characters, particularly in connection with the character Luther Billis, as well as the sexual openness of the French and islanders as opposed to the Americans, than was the film.


After hearing the other day of actor John Kerr’s death, I determined to revisit that film, a movie I first saw the year of its creation, 1958, and about which I have long had mixed feelings. Although I loved much of the acting and singing, as a child, I felt from the beginning that Logan’s heavy reliance of colored filters—although wonderfully theatrical—was distracting. And I have always had difficulty with Ray Walston’s comically grouchy character, Billis. 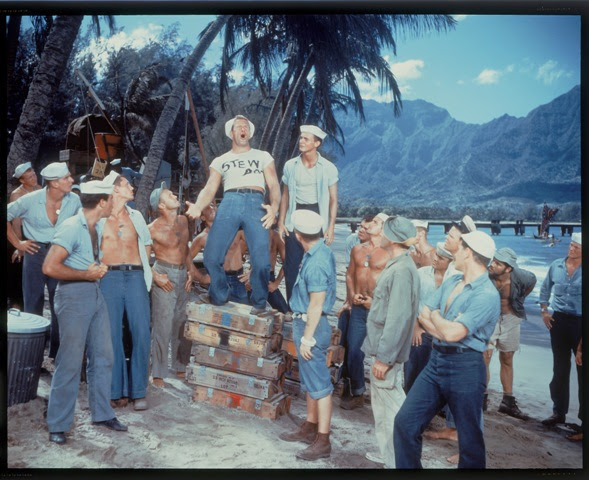 This time, moreover, I felt even more ill at ease with the American characters, who, in the film version, seem less “confused” than utterly tense, unable to enjoy even those emotional states of which they sing and dance. And it is this tension, it seems to me, which helps to make this film musical such a discomforting and emotionally unfulfilling experience.


By beginning the film with the on-the-beach Seabees’ and sailors’ “complaint,” “There’s nothing like a dame,” Logan immediately sets up a series of problematics: the handsome and sweaty sexual males of the island are segregated from the island’s women, from both the nurses, who they can glance at only in passing, and the native women, who the French have sent off to other islands for their protection. These men are not just expressing their yearnings, accordingly, but voicing their absolute frustration. They are lusty males without any hope of releasing their pent up emotions.


Only Luther communicates with Nelly Forbush and the other women. But then, he is a special case. Luther does their laundry, sews grass dresses, and does various other “womanly” things that permit him entry into their company. In short Walston is asked to play the film’s only “gay” man while simultaneously having to pretend to be just another of the guys—a slightly more eccentric version of the desirous sailors—which helps to explain the actor’s somewhat dislikeable snarls and growls. Without openly admitting this character’s sexuality, the screenplay later asks him to have no interest in Bali Ha’i’s women (he seeks out the male-centered Boars’-tooth ceremony), and finally, requires that he dance in Forbush’s Thanksgiving performance in drag! Is it any wonder that he attempts to escape the island with the handsome and stated “sexy” Kerr (playing Lieutenant Cable), both by renting a boat and hitching a ride aboard the latter’s plane?

Nelly Forbush, played with almost clueless romanticism by the ever-buoyant Mitzi Gaynor, quickly allows herself to fall in love with the island’s handsome Frenchman (Rossano Brazzi), without even pausing to ask why, as he has told her, he has killed another man. Yet she rises into an absolute panic when it is revealed the beautiful children she has admired (later Los Angeles gallerist
and my friend Candace Lee and Warren Hsieh) are de Becque’s own, fathered by a native woman.


As absolutely enchanted as he is by Bloody Mary’s young daughter, Liat (France Nuyen), Cable cannot bring himself to marry the girl, reminding himself in song of his Philadelphia girl back home. But, at least, he clearly recognizes his hypocrisy, admitting the tensions within himself quite clearly in the work’s most morally responsible song, “Carefully Taught.” Kerr, however, doesn’t even get to sing that important admission, since it’s lip-synched; and Emile de Beque’s great ode to love, “Some Enchanted Evening,” is sung by Giorgio Tozzi, which may explain some of Brazzi’s inexplicable grimaces. Even original Broadway performer Juanita Hall’s wonderful Bloody Mary is sung by another. Only Gaynor and Walston get to belt out their own predicaments.


In short, not only have the American figures of this work been “carefully taught” their racial and social isolation by their parents and society, but  their characters in this highly artificed film are “carefully taut,” prudishly tense in their separation from the more open islanders. In a film where no American seems at home in his or her skin—the writers going so far as to punish Cable’s sexual and racial transgressions with his death—it is perhaps appropriate that nearly every time anyone breaks into song, the sky unnaturally turns into garish yellows, purples,  blues and reds. In their up-tight sexualities these figures, understandably are slightly queasy, ill-at-ease in this brave new world.


While the Broadway cast eventually came to comprehend the absurdity of their perverted love interests, symbolized by the “hundred and one pounds of fun, Honey Bun”—an absurd vision of fulfilled sexuality, the film’s actors know only that they are “moving on” and away from this frightening world at film’s end. Only Nellie remains, perhaps now more as a mother than a lover.
Los Angeles, February 13, 2013
Posted by greenintegerblog at 10:04 AM