no escape
by Douglas Messerli

Jacques Prévert (screenplay, based on a novel by Pierre Mac Orlan), Marcel Carné (director) Le Quai des brumes / 1938 / the film I saw as a restoration of the original at The Royal Laemmle Theater, Los Angeles, 2013.


I almost think you have to be French to truly understand Marcel Carné’s masterful film, Port of Shadows. It’s not that the Jacques Prévert story is difficult to comprehend, a love story in which fate rules: this sense of destiny has been there at least since the Greeks. Any American admirer of film noir would understand the dark undertones of this simple tale—although one might argue that American film noirs are always more complex and murkier in their plots. The muddled morality of this film embedded in its seemingly permanent surrounding of dense fog is not so dissimilar to the elements of early German cinema and most of British film-making. No, there’s something more elusive than all that. Carné’s characters enter the film with a sort of intense halo of fatalism about their heads: nothing good will happen because it never does; while, there are pleasant moments, of course, life is not good to people like them. It’s as if Victor Hugo’s Fantine had never truly had a dream, but simply accepted her tragic life. 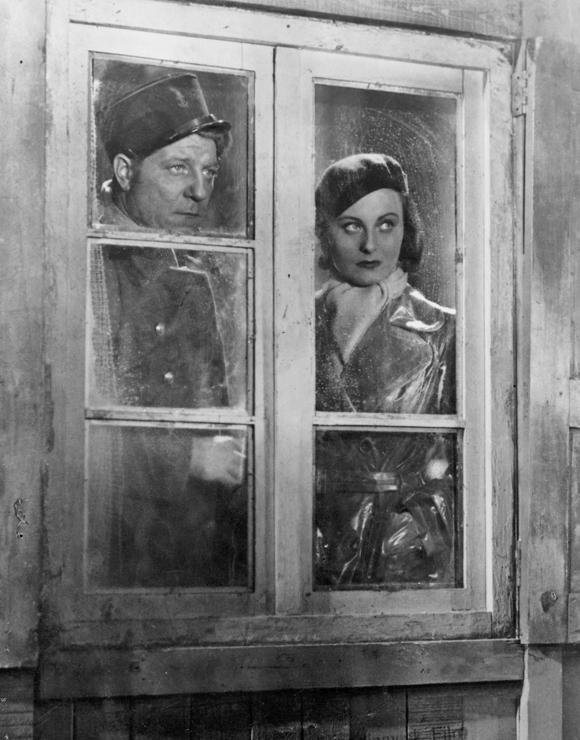 It is so difficult, accordingly, to explain the quality of this film to a society that believes—so it imagines—that everything will eventually turn out all right, that life is a series of constant betterments and achievements; how even to speak to a society that believes in a dream of financial and social rewards about such French ennui? Jean Gabin as Jean, an army deserter, has no illusions left as he enters the environs of the port city, Le Havre. He has only his personal honor and nobility, and they mean nothing. He saves a dog by forcing a driver who has picked him up to steer out of range, yet later attempts to drive the poor beast away, nonetheless, feeding the animal even though he, himself, is nearly starving So too does the girl (Nelly, played my Michèle Morgan) he accidentally meets, through the goodwill of a passing alcoholic (people in this world are more defined by their behavioral type that by any individual eccentricities) who takes him to the Panama’s bar, carry with her the world’s sorrows. She, too, is hurt, a destroyed person, yet tough: she has, after all, although she can’t yet quite admit it, overhead the murder of her former boyfriend, Maurice, by her ugly godfather, Zabel (Michel Simon). This couple’s encounter, the immediate attraction between the two, their later short-lived affair (one night is all that Carné allows his figures) is part and parcel of the world of destiny these figures inhabit. So too are they quickly caught up in the sacrificial death of the local painter (Robert Le Vigan), who, after swimming out beyond his capabilities, leaves his clothing, his brushes, and his passport for Jean to “inherit.” The gesture is noble, but it too can have no ultimate effect in this world of dark shadows. Although Jean books passage on a ship bound for Venezuela, where he might escape the long hand of fate, once he has met Nelly, he has no choice but to return to the city, saving the girl from the fiendish hands of the jealous godfather only to have to face his own comeuppance for having belittled the local thug, Lucien (Pierre Brasseur). As Sartre would later express it—although far more metaphorically—there is “no exit.” Jean knew his fate the moment he left the military, and Nelly knew she would be left alone the moment she met Jean. The characters reveal this in their every movement. Jean, even as he, near starvation, cuts the bread and sausage Panama has awarded him, Nelly, in her deep, deep entrenchment within her plastic slicker, hands nearly always hidden, head pointed forward as if she were about to endure a deep rainstorm. Even Zabel seems to welcome his deserved punishment of murder by Jean.


Shot, Jean orders Nelly to kiss him quick before he expires. This is only a world of only quick-fixes, love found on the run, of one-night stands, momentary pleasures than can have no meaning beyond the seconds in which they bring pleasure.


Although Carné’s films have been described as “poetic realism,” they most emphatically have little to do with “reality,”—however one defines that—and even less to do with “poetic” expression, unless you define poetry as complete sentimentalism. Rather, Carné’s and Prévert’s theater is much more archetypal, having more to do with Kabuki and the French puppetry figures such as Punch and Judy, actors that formally play out the same stories again and again, than with what Americans might describe as naturalistic theater. Jean and Nelly are not realistic lovers but expressions of the desire of the French to discover love and the ability to give oneself completely over to it, while knowing that that can only lead to one’s destruction.


It is no wonder that in the France of 1938, when this film first appeared—faced as it was with complete social betrayal and cultural annihilation—there was an outcry, politically speaking, against Carné’s seemingly uncontroversial movie, for it represents a kind of vision of love as surely locked into the French character as the German Wagner’s Tristan and Isolde represented the inconsumable passions of German culture. The cigarette munching, face-slapping, but tender-hearted Jean (Gabin at his best) represented a lover that might find fulfillment, but only in a single night—love could never to be sustained. It shares with Wagner’s neverland vision of consummation and sense of ever-lasting frustration, the idea of love and death being interminably intertwined.


Although the American filmmakers of 1938 might never have been able to reveal the complete satisfaction of a sexual event as Gabin and Morgan express the morning after their night together, US directors would be sure, in the morning, nonetheless, that life would go on.  Love was love, death, death. Only an American could say that!