the singing spy
by Douglas Messerli


As critics have long commented, music plays a large role in Hitchcock’s films. Not only are his major works highly dependent on their musical scores (it is hard to imagine Vertigo or even North by Northwest without Bernard Herrmann’s scores), and some of his films, most notably the remake of The Man Who Knew Too Much incorporates music quite thoroughly into its plot. Interestingly enough, Hitchcock’s entertaining film of 1938, The Lady Vanishes, has close story connections with both North by Northwest and The Man Who Knew Too Much.


Just to remind readers, I’ll briefly recount the plot, which begins in a small hotel in the implausible country of Bandrika, “one of Europe’s few undiscovered corners,” where an avalanche has just closed off all the major roads, forcing several international tourists to seek refuge in the small, overcrowded Gasthof Petrus Inn. Among these are a beautiful English woman, Iris Henderson (Margaret Lockwood), who, obviously quite wealthy, has experienced everything:


I’ve no regrets. I’ve been everywhere and done everything. I’ve
eaten caviar at Cannes, sausage rolls at the dogs. I’ve played
baccarat at Biarritz and darts with the rural dean. What is there

left for me but marriage?


She is on her way back to England to marry a man she describes as “a blue-blooded check chaser,” whom she does not love.


Also attempting to get a room are two wonderfully comic quintessential English cricket-lovers, Charters and Caldicott (Basil Radford and Naunton Wayne) who seem to travel about the world to watch the game, now desperate to return to see the last days of a test match in Manchester. With droll results, the two are forced to share a bed in the maid’s room. Upon their protests, the manager mutters:


Well don’t get excited. I’ll remove the maid out.


So popular was this single-mindedly sports-loving duo that they appeared in three later films, including one, Night Train to Munich, directed by Carol Reed.


A sleazy lawyer, Mr. Todhunter (Cecil Parker), and his mistress, “Mrs. Todhunter,” are equally proffered unpreferable quarters. A traveling musicologist, Gilbert (Michael Redgrave), plays clarinet to dancing peasants in his room, awakening Iris and preventing another guest, Miss Froy (Dame May Whitty) from listening to the beautiful ballad sung by a singer beneath her window. Iris, complaining “someone upstairs is playing musical chairs with an elephant,” bribes the hotel manager to get Gilbert removed from his room; Gilbert reciprocates by entering Iris’s room. And Mrs. Froy hums the tune she has finally heard, while the singer inexplicably is murdered. 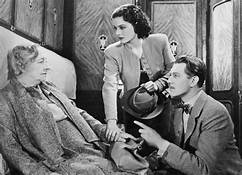 Hitchcock and his writers have set up a series of seemingly comical events that suddenly turn sinister, particularly when the next morning Iris is struck on the head by a falling planter clearly meant for the elderly “governess” Froy. Most of the rest of the film takes place aboard a train wherein these same figures speed their way, presumably, toward Britain, Miss Froy ministering to the young Iris, who once aboard, has passed out, suggests a remedy of tea. Froy and Iris head to the dining car, encountering the Todhunter couple along the way, and sitting near the two ardent cricket devotees. As the two women attempt to further introduce themselves to one another the train whistle screeches, and, unable to be heard, Froy traces her name across the window pane.
They return to their car, where Iris drifts back into sleep as Miss Froy works her acrostic in the Neddlewoman. When Iris awakens, the elderly lady is gone, and her fellow compartment travelers claim no knowledge of such a personage. Meeting up again with Gilbert, Iris explains her quandary, and two together begin a long search for the now-vanished woman, what Hitchcock might describe as the McGuffin of the work.
For various reasons—fear of their illicit affair being discovered, determination to rush forward to their cricket game, and more nefarious and mysterious purposes—no one but Iris seems to have seen the woman dressed in “oatmeal tweed.” Another woman, dressed similar to Froy shows up and a renowned doctor, Hartz (Paul Lukas) traveling on the train, suggests Iris, having had a brief concussion, has imagined the whole thing.

Despite his witty and sometimes dismissive repartees, however, Gilbert stays with her until the two rediscover the name “Froy” upon dining car window, realizing suddenly that something far darker is afoot. The couple is attacked and, when they finally really realize that Miss Froy lies beneath the heavily bandaged patient of Dr. Hartz, attended by a nun—who the couple observes, is wearing high heels—the seekers are threatened by poison, while Hartz admits his plot. But the nurse  refuses to kill them, and the two are spared only to observe, soon after, the train’s coming to stop near the country’s border. Realizing that Froy will soon be taken away, they free the bound patient while bandaging up the nun, who is taken off in Froy’s place, the train continuing on its way. Yet again, however, the train slows, a soldier demanding they all accompany him to the British ambassadors’, Iris and Gilbert realize now perceiving that all their lives are in danger. They attempt to warn the others, who, much like some Britons on the eve of World War II, refuse to believe in the dangers—until the shooting begins, when, at least, the cricket enthusiasts are drawn into the battle.
Froy, meanwhile, draws Iris and Gilbert momentarily away from the fray to reveal that she is actually a British agent who has been given a secret message to pass on to government superiors. The message, in the form of the song she has heard in the inn, is sung to the musicologist whom she demands remember it, before rushing out the other side of the train to escape.
The travelers eventually win out, and escape over the border. Back in England Iris and Gilbert, ducking the man waiting to marry Iris, rush to government headquarters, where they hear Miss Froy, at the piano, singing the coded message. She has survived! The couple discusses their honeymoon.
A great hit in both England and the USA, The Lady Vanishes convinced producer David O. Selznick that Hitchcock could make it in Hollywood, forever changing the life of the director and American cinema. Certainly one can see close links between this early film and the early work I previously mentioned, The Man Who Knew Too Much (a film the director made in 1934 and remade in Hollywood in 1956), which depends on a musical passage for a planned murder, and involves its characters, Jo and Ben McKenna, in an international abduction of their son and a political assassination for their having accidental knowledge of events. In the original story on which The Lady Vanishes was based, a novel The Wheel Spins by Ethel Lina White, the Miss Froy character is similarly an innocent who has acquired information without realizing its significance.
Yet the structures and themes of this film reappear again and again in Hitchcock’s later Hollywood works as well. No one can see The Lady Vanishes without thinking of Roger Thornhill of North by Northwest—a figure who has been mistaken for a government agent—engaged as well in a long secretive and romantic train ride. As in so many of Hitchcock’s later films—one thinks immediately of The Wrong Man and Vertigo—no one in this early film can be found who speaks the truth, while others deliberately obfuscate.
In short, one might describe this 1938 hit as representing elemental themes which the director would explore again and again: presumption of guilt, the involvement of innocents in plots of international intrigue, and the burial and removal of truth, which, when bravely and resolutely faced by those who must battle these forces, often results in regeneration and renewal through love.
Los Angeles, March 6, 2013