Originally made for Austrian television, Michael Haneke’s retelling of the Kafka novel is faithful rendition that even ends, as does Kafka’s book, in mid-sentence. But Kafka’s fable, in the hands of this masterful director, is transformed into a more grimly absurd work by the qualities of verisimilitude lent to the fiction by the medium of film itself. While one can read Kafka’s brilliant work as a kind of parable, actually seeing the distressed land surveyor K (Ulrich Mūhe) having to face the dozens of dispassionate authorities and other bureaucratic functionaries of the small, isolated town infected by the machinations of the unseen Castle, provides this work with an eerie sense of dé-jà vu. We have seen just a world in the German and Russian dictatorships—but after the fact of Kafka’s telling. And the strange displacement of that realization emphasized by Haneke’s theatrical presentation of the tale—including complete blackouts after each scene( as if imitating the book’s original chapters) dark, often blurred, and obscured images, and the perpetual sense of the characters’ walking which takes them nowhere. This is a world where no one quite knows what’s going on, and where some simply obey without even understanding entirely what has been requested of them.

Arriving in the small village after having, somewhat inexplicably, given up his previous posts and having spent nearly all of his funds in response to the request from the Castle for a land surveyor, K. is greeted with suspicion and disbelief. He is offered little, just a corner in which to sleep in the local bar, and even then is told by an authority that it is illegal for him to stay there. Two ridiculous assistants, Artur (Frank Gierling) and Jeremias (Felix Eitner), evidently appointed to serve him by government bureaucrats, arrive without equipment or any experience. He spends much of the rest of the work in comically trying to get rid of them. Despite a call to the castle to confirm his appointment, he is told that there is no need of a land surveyor. Yet a second call accedes to the fact that he has been called for, which allows him, at least, a partial night of sleep. Another strange, but likeable figure, Barnabas (André Eisermann) visits him as a Castle messenger. Yet when queried he has never been in the Castle, and, although he promises to return K’s message to the Castle, he returns to his own home, K trailing after him and discovering within two sisters and a mother all perfect willing to serve him. When one sister, Olga (Dörte Lyssewski) reports she must go to another inn for provisions, K follows her, discovering that her real intention has been to sexually entertain the crude underlings of a man associated with the Castle, Klamm. There also he meets the bartender, Frieda (Susanne Lothar), Klamm’s mistress. Whether K becomes attracted to her for her beauty or because of her links with the Castle, we never know, but before the night is out, and despite further attempts by authorities of trying to track down K and expel him, he and Frieda engage in a frenzy of sex.
So K becomes involved in the life of a village under the somewhat resentful yet serf-like thrall of the Castle. Other underlings come and go, each giving their own strange orders, warnings, and messages. The city’s Council Chairman, with whom K. ultimately meets, explains, seemingly quite rationally, that it has been a long-time mistake, that the community was ordered a land surveyor for whom they had no need, with, over years of paperwork and messages to and from the government the confusion has led to K’s unintentional appointment. But having fallen in love with Frieda and having given up all former positions, traveling the long distance, and spending his savings, K. has no choice but to remain. He is appointed as school janitor, but even his night in the schoolhouse with Frieda—wherein the couple, nearly freezing, break into the woodhouse and are plagued by the appearance of the Artur and Jeremias in their bed—ends in disaster as the school master and students arrive while the couple are still asleep, naked upon their mattress. 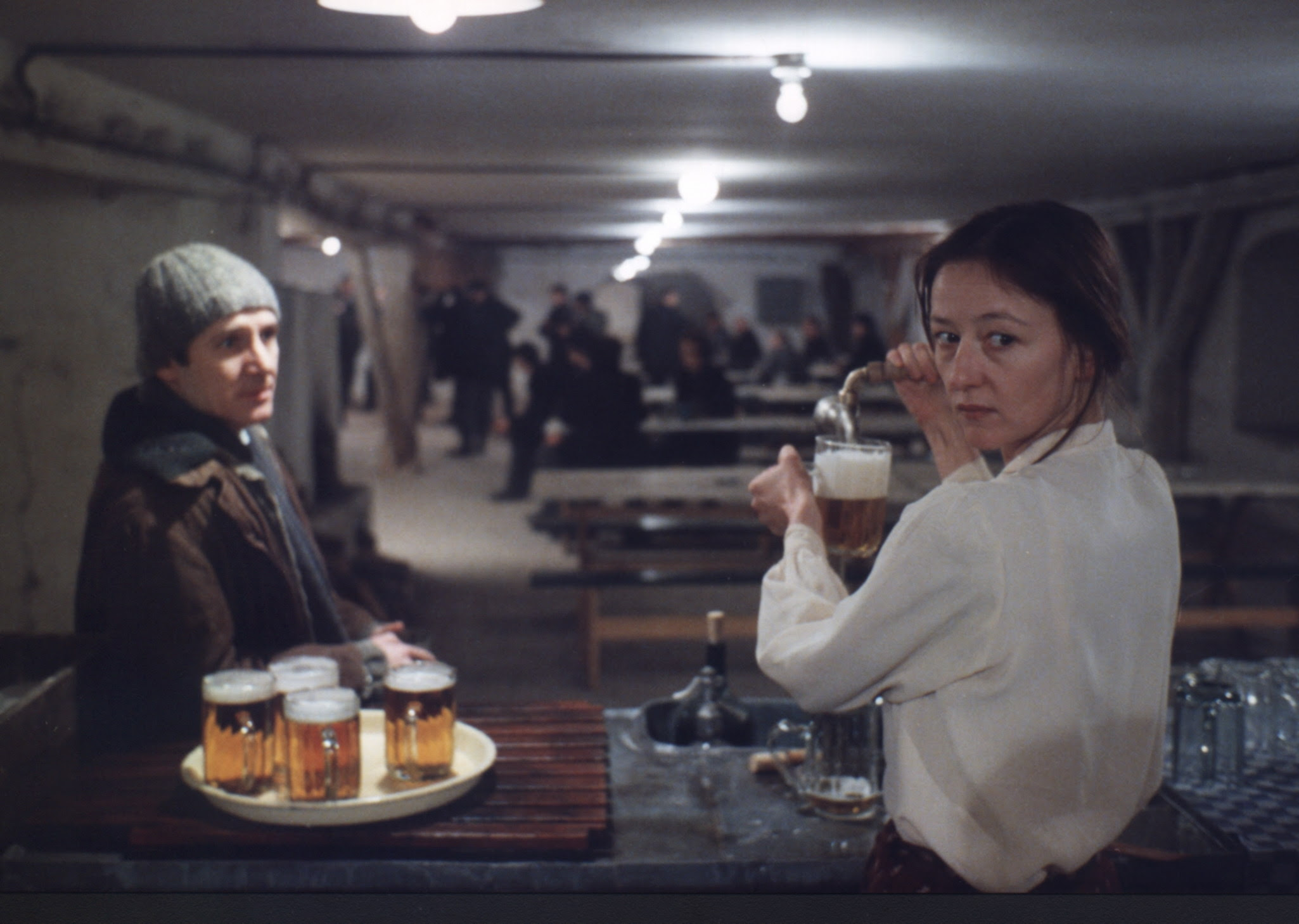 Despite Barnabas’ messages to and from the Castle, there seems to be no real communication, and others of the village are shocked that K has visited the young man’s house, which seems to be associated with the daughters’ shocking sexual behaviors. When Frieda finally leaves K, determining that despite her love for him, he has merely used her in hopes of connections with the Castle, K returns to the inn where she has previously worked, attempting to meet with authorities, but only finds another Castle representative who, luring him to sit upon his bed, explains his inability to intercede.
As I mentioned, the film, just like Kafka’s work, ends mid-sentence with K’s intent to seek further intercession, a suggestion perhaps, as Kafka’s friend and executor, Max Brod, had argued that Kafka intended to have K remain in this ghastly village, sent on the day of his death, a message that, although he was still illegally there, he had permission to remain. Perhaps Kafka had no intention of completing the work. It hardly matters, for what is clear, particularly in Haneke’s powerful rendition, any further action in such a perverted world, would have had no further meaning for K’s life. Like the later Jewish, Gypsy, and gay prisoners of the German (and Russian) concentration camps, for those deemed as outsiders whom the authorities had determined to destroy, the only option was to pray for survival; acceptance, joy, love, comfort are impossible imperatives. Although we never see the Castle, its feudal shadow looms large over this cold and frozen village where everyone is a harbinger of suspicion and hate.