the carp leaps out of its tank

Loving companion to an ailing woman, Haru Masuda (Sumiko Sakamoto), and a kind of adoptive father to her two children, Koichi (Masaomil Kondo) and Keiko (Kelko Sagawa), Yoshimoto Ogata (Shōichi Ozawa) desperately tries to make ends meet by leading a kind of double life: pretending to be a salesman—to keep both police and the mob off the track—while shooting two pornographic movies each day, selling them (much like a salesman) to wealthy businessmen. To justify his occupation, Ogata declares that he is only serving a social cause, giving men what they need in order to survive—as important as food and finances. The problem, of course, is that in the post-World War II Japanese society in which he lives, the blue films he makes are illegal and the mob is only too ready to demand their share of any meager profits. Despite some few successes, accordingly, by film’s end we see just how much of a failure Ogata is at his strange profession. 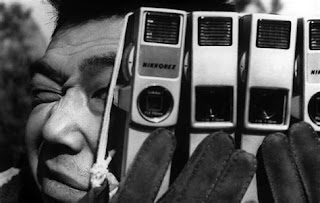 More importantly is the effect of his skewed perspective of the world on his own family. The woman he lives with, Hara, refuses to marry him, having been warned by her husband—who inhabits the body, she believes, of a large carp she keeps in a bedroom tank—despite the sexual thrill she feels by his attentions. The family history—revealed in out of sequence, cuts, each further cut revealing more than the one that proceeded it—also demonstrates the resentment of the two children for their mother’s sexual involvement with Ogata. Even as a young child, Keiko reacts to the “stranger’s” intrusion upon their lives, rushing away from his arms into the path of a bus. The elder son, Koichi shows his detestation of the “father” by demanding money to get into college; he is a poor student, and so must pay his way in with a bribe.
Despite the relatively restrained sexuality of Ogata’s earliest films, in his own home life, things are much more suggestive, as Koichi jumps into bed with his mother, declaring he is cold, and, later, demands her gentle ministrations (a mix of hugs and leg-rubbings) for the same reason. Ogata, attracted to the school-girl Keiko, plays out one of his film scenarios with a retarded girl dressed in Keiko’s own school uniform, and simultaneously demonstrates a sexual interest in his “daughter.” Becoming pregnant, Haru becomes ill and is hospitalized, during which time she suggests that if she were to die, Ogata should marry Keiko. All of this, moreover, is represented by Imamura in a series of scenes shot through cracks in the wall, peeking in through windows, peering into crevices, and, as in the discussion with Ogata and Haru in the hospital, with others overhearing. If Ogata’s films are rather straight-forward, giving his customers what they desire, his and his family’s lives are lived out in a much more prurient way, belonging more to pornography that his blue movies. Keiko even participates in a large group orgy. 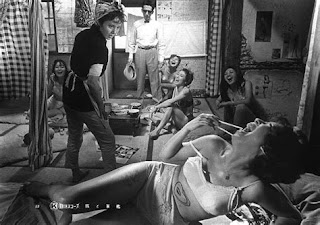 At an even uglier level, moreover, is the way the entire society, sweeping up both Koichi and Keiko, perceives everything it terms of money. With everyone he knows, his friends, even some of his clients, the mob, and his “family” constantly demanding money, there is no way Ogata could ever succeed no matter which avocation he might have chosen. In a strange way, Ogata, despite his abuse of actors and his literal rape of Keiko, is the most innocent figure in this darkly satiric work. At moments it is almost as if Ogata, in perceiving his films as being of social value, thinks of his work as an art, not unlike that of the director of this film, Imamura. But in such a greedy and selfish world in which he lives, he will never be able to develop or better his “art.” He is born to failure.
Working throughout with a cinematic partner, a misogynist who eschews all women, a man who declares they are dangerous and even unclean, Ogata finally comes to a new perspective: instead of dealing with “real” members of the opposite sex, he will create a machine to salve his sexual needs. A bit like Tommaso Landolfi’s character in his story, “Gogol’s Wife,” Ogata, after Haru’s death and Keiko’s rejection, moving to a small houseboat works to create a latex doll to fulfill his sexual desires, shifting from a kind of filmmaker to a kind of sculptor. With his work nearly completed, Ogata, in a sense, is freed from the restrictions of his previous world—is released from the confining sexual mores, the financial demands, and the greedy and selfish ploys of other beings. The boat breaks loose from its moorings and is quickly taken out to sea. Film-critic Donald Richie describes it as, “a scene of mysterious beauty, he sails, all unknowing, through the canals of Osaka and out into the Pacific Ocean—presumably never to be heard of again.” Perhaps one might rather say, however, Ogata sails into a world where he will never again have to hear from the closed and truly pornographic society in which he has previously lived.