a human saint
by Douglas Messerli


It’s curious to read Roger Ebert’s 2001 review of Fellini’s Juliet of the Spirits. Ebert sees the film as the first of the director’s decline, and, in retrospect, as a work even less interesting than it originally seemed to be:


Juliet was released in America in 1966 [my usually reliable
ICBM source says 1965], and some audiences no doubt
attended in an expanded state of consciousness. They were in
the right show: a head trip, as they said. Seen in 2001, when
the party is long over, it’s like a streamer from last summer’s
dances: still bright, still gaily waving to echoes of forgotten
music.

My experience of this film precisely the opposite. I don’t recall whether I saw the film when it originally appeared in theaters, but I certainly saw it within a couple of years after its American premiere. Although I had already enjoyed La Dolce Vita and was awed by (at the time utterly impenetrable) 8 ½, I found Juliet of the Spirits to be fairly conventional, particularly in its psychological fantasies. I also probably misunderstood the film’s satire of its jet-setter’s fascination with all things spiritual and vaguely new-wave as advocating those values—values I found intolerable. The very idea of a room full of disciples of someone like the hermaphroditic Bhisma in a house stuffed with individuals playing out their sexual fantasies, as was Juliet’s next door neighbor Suzy’s, seemed merely absurd. During that period I had also rejected the kind of simple surrealism which is at the heart of many of Fellini’s nevertheless memorable images. I do recall finding the film quite beautiful, and I always enjoy Nino Rota’s remarkable scores, but overall, I felt disappointed with the film. 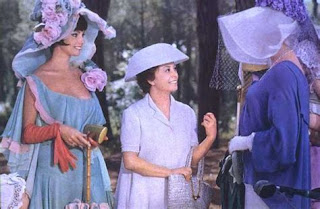 Over the years, however, I have watched it again several times, and the other day, in viewing it once more, I realized how truly wonderful this film was, particularly given the amazing performance of Giulietta Masina as the suffering housewife. Ebert describes the character, Giulietta Boldrini, as being primarily a bourgeois woman who is withdrawn and melancholy, a kind of “party pooper.” But I now see her attempts to please her philandering husband and her intrusively bossy mother and sisters as a vision of gracefulness in world where nearly everyone else goes grotesquely traipsing through life. Despite her obvious fears, her spiritual searches, Giulietta is a remarkably open to the crude world around her. It is she, after all, who hears all their voices.


I now also have come realize that, although Fellini’s films seem always to present characters so exaggerated that they seem to exist only in a side show of the circus (his major fixation), in fact there are just larger-than-life perceptions of a landscape of the Italian world, which as dancer Carolyn Brown has written, really did exist during those days in Europe. Fellini simply put a kind of magnifying glass on the people who surrounded him, which in this film we first encounter as Giulietta’s quiet world—in which with her two servants she awaits her husband’s return from the office for a private birthday celebration—when her home is suddenly invaded, in every sense of the word, with loud and noisy revelers, a clearly gay medium, a sex-charged sculptor and her current boy-toy and numerous others, who cannot stop for a moment to let anyone else speak. The silent Giulietta has no choice but to put on a smile and go with the flow, as they all attempt to simultaneously make over her life. 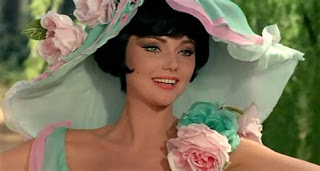 Similarly, her overdressed mother and sisters the very next day do the same by telling her how to make up her face and hair and fuss over her simple but quite elegant dress. A doctor friend pontificates about the housewife’s “problems,” real and imagined. Into this already nearly unbearable landscape comes her next door neighbor, Suzy, with an entire retinue of servants and admirers who create for her, as if she were an Arabian sultan, a tent into which she can lay her nearly nude body to rest.


Giulietta’s cheating husband Giorgio (Mario Pisu) often does not even return home, but when he does it is nearly always with this circus of life. If this, as critics argue, is Fellini’s statement of his own values played out in opposition to those of Giulietta, his real-life wife, it is certainly not presented without a strong sense of satire and criticism. For it is Giulietta, gardening, cooking, gossiping with the maids, who alone retains any real elegance and centeredness in this film.  Only with her mother’s and sister’s intervention does she finally seek out a detective service to track down her husband’s mistress.

It all now reminds me a great deal of the extravagant selfishness of that period, in which I was certainly a participant as I have written elsewhere, but which I see now for its emptiness. It is not her erring husband who wins out in the end. His urbane friend, played by José de Villalonga, is far more the type of being with whom Giulietta should be involved, a romantic who enjoys poetry and solitude, and wonders at the beauty of her garden. 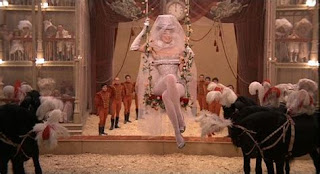 As Bosley Crowther wrote when the film first premiered in New York, Giulietta’s “psychological problem is not too elusive or complex.” She has simply been compelled as a child to face death dramatically by the terrifying nuns of her school, a performance violently interrupted by her church-hating grandfather. Her fears can nearly all related back to her childhood—the domination by her father, mother, church, and later of her sisters, husband, and friends. She has never had the opportunity to create her own vision of life. By film’s end, Fellini, presents her as a kind of Alice in Wonderland, finally freed from her insanely imposed conditions; but we have no comprehension, other than she will now move beyond her husband and acquaintances, where she will go or how precisely she will define that life. As Giulietta, in the film’s last images, walks off into the nearby woods, Fellini suggests that she may now be open to the sexual lessons of her friend Suzy. But Masina herself felt it meant simply that she was alone, “abandoned and lonely.” Seeing it again this past week, I also felt that wherever she is headed and whatever she will do, it will be with a quiet grace that  few others in this film have been able to achieve. In a world of such freaks, Giulietta stands out as a human paragon of love and caring. And that, in turn, transforms Fellini’s film from a gaudy recreation of what Ebert described as a “head trip,” into a sensitive exploration of what it means to be a human saint in a distracted world, the role in which the frightful nuns had cast her even as a child.