doors and windows
by douglas messerli

Named for the golden “helmet” of hair worn by its heroine, Marie (Simone Signoret), Jacques Becker’s Casque d’or is his most likeable and influential of films, despite critics of the day rejecting it for its emphasis on atmosphere over psychological realism. The film has many links with Jean Renoir’s (a director with whom Becker often worked) French Can-Can of 1954 and Jean-Pierre Melville’s Bob le Flambeur of 1956, all three films leading the way, in some aspects, to the French New Wave.

Yet, while the latter two films seem busily complex in their plots, structures, and character motivations, Becker’s work seems, on the surface, quite simple. Its story is so slender it can be summed up in a few sentences. On a Sunday boating trip a group of Belle Époque gangster’s and their whores stop by a country inn, where they boisterously drink and dance. The most beautiful of these women, Marie, however, is not happy with her current beau, Roland (William Sabatier), with whom she constantly argues. One of the gang members, Raymond (Raymond Bussières), meets up with an old friend, Georges Manda (Serge Reggiani), a former gang member but now a simple carpenter—to whom Marie is immediately sexually drawn—and despite Roland’s anger, Georges and Marie dance, at the end of which Roland attempts to attack Georges, who quickly knocks him out. The following day, Marie is missing, and gang members have been sent out to bring her back. She is apparently staying with one of her women friends, but soon after visiting the gang leader, Félix Leca—who would also like to have a relationship with her—she visits the carpenter, where she is spurned by his bosses’ daughter, whom is obviously attracted to or having an affair with Georges
That evening the gang members, along with wealthy Parisians, “slumming” it, gather at a local café along with their women. Georges suddenly appears, proposing to fight Roland for Marie’s love. Despite the warnings of Raymond, the two retreat to the back of the “club” for a knife fight, which ends in Roland’s death. Although the gang members and their women escape the café, the police arrive, discovering the corpse and arresting all those still within.

Raymond sends a message for Georges to meet him in the country, but when Georges does so, it is apparent it was Marie who written to him, and for a few days the two have a passionate affair at the small cottage run by La mere d’Eugène (Odette Barencey) before there are tracked down. Meanwhile, the gang head turns informant to his police detective friend, suggesting that Raymond has been the murderer. When Raymond is arrested, Georges—out of loyalty to his beloved friend—returns to Paris, turning himself in. Raymond discovers that he has been framed by Leca, and is held as an accessory. Georges is carted away to prison, and in the last scene, as Marie watches from a nearby window, is guillotined.
Throughout this frail plot, there are few other complications, as the authors focus on their fairly small cast; and even from the beginning we know, in the closed and violent world in which they live, the central couple is doomed. The wonder is that they discover a way to even find a few days of happiness.
Despite its dark themes, however, and the fact the movie was filmed in black and white, the work seems, almost, to have been made in color. One might swear, after seeing this film, that Marie’s hair was indeed blonde, that the boa she standardly wraps about her neck is a bright color, the country scenes filled with greens and browns.
While Becker seldom “explains” his character’s motives, he amply demonstrates their conditions and their metaphysical situations. Casque d’or is a world of “open” and “closed,” space, of “out” and “in,” a horizontal society that has no vertical lift. In scene after scene, Becker’s camera takes his figures through doors, which are continually demanded to be closed, but are secretly opened or, in the country scenes celebrating Georges’ and Marie’s love are thrown wide open. So too do windows, throughout this film, reveal the conditions of these figures’ lives. Particularly in the scene where the police arrive at the café where the already escaped prostitutes and other neighbors peer in at the trapped customers, in the scenes in the country, where upon awakening, Marie throws wide open the window, and in the last scene through which she observes her lovers’ death, windows reveal the violence, love, and destructiveness of the society at large. Although these “thugs” often roam the streets and the countryside, most of their life is spent in small rooms where they hunker together like docile beasts. And even then they are continually told by the gang leader to retreat to even smaller spaces. 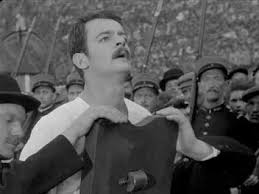 This is a world in which even the dancers move in spirals, in dizzying spins, legs and heads in place. Even the joyous boat party of the first scenes is a movement through the horizon. The closest these figures get to heaven is in Marie’s radiant gold hair, but that is just a “helmet.”
The only moment of true verticality in this film that I can recall is the final downward slide of the guillotine blade at the very moment where Georges looks up to accept it and the will of God.
In short, although Casque d’or’s plot is so essentialist that it is almost abstract, his images reveal to us all the internecine rules, regulations, and limitations of these gang member’s world, a place, like Sartre’s later play, that has “no exit” accept in death.