a cold work of art
By Douglas Messerli

George (Bob Hoskins), a small-time thug who has just been released from prison, tries to make contact with his former employer, Denny Mortwell (Michael Caine)—a man deeply involved in the porn industry. Although he cannot locate Mortwell, an assistant assigns George a job as a chauffeur for one of the prostitute clients, Simone (Cathy Tyson).
Ill-suited to the job, which also includes “playing” a partner to Simone in order to get her past the stares of hotel managers, George begins his position as a badly dressed, somewhat bigoted slob, but as he gradually forms a relationship with what he first describes as a “thin black tart,” he is changed. Buying new clothes for him, and demanding changes in his demeanor, Simone gradually transforms the rough edges of his personality, while he, describing her as a “lady,” gains her trust, revealing some of her past involving a young girl, Cathy (Kate Hardie), with whom she once worked on the streets. 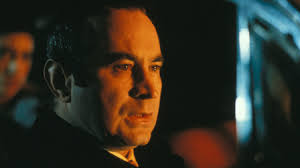 Much of Jordan’s noirish film is simply a beautifully cinematic travelogue of the dark, underworld of London night life, as the locales alternate between lavish hotels and the seedy street life and semen-covered carrels of sex shops. Yet, at times, the plot goes out of its way to create a sense of mystery when, in actuality, its story is quite simple—although, despite watching this film now several times, I still do not quite comprehend the relationship between Simone and Mortwell, since she presumably now works as an “independent” prostitute. One also wonders why Mortwell is so determined that George get “dirty information” on one of Simone’s clients; perhaps he simply wants something with which to have control him for his other nefarious business transactions. George’s friendship with an artist-writer, moreover, is so muddled that it is totally unbelievable. It hardly matters, for the real center of this film, as George is forced through his search for Cathy to reenter Mortwell’s dark world, is the growing, non-sexual relationship between George and Simone.
Throughout, George seems almost sexless, rejecting the numerous pleas for sex with the dozens of prostitutes he encounters through his job and search for Simone’s friend. Clearly George, underneath a violent man who perceives male-female relationships in terms of macho stereotypes, is simply fascinated by this woman who, turning the tables on him, dominates and controls him while acting as a submissive figure to her sexual clients. In this sense, Mona Lisa brings up several of the same issues of sexual identity and gender as Jordan’s later film, The Crying Game, particularly when he locates Simone’s friend only to discover that Cathy, a drug addict, and Simone are lesbian lovers. 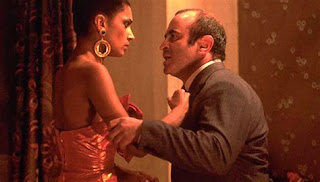 George finally perceives that he has been “used” by both Mortwell and Simone, and when Mortwell and Simone’s former pimp both show up to punish the liberating trio, Simone quite brutally shoots the attackers dead before turning the gun on George as well.  Finally, realizing that she is now a truly “free” woman, she spares George’s life, just as she has saved him through the murders. But unlike the more satisfying ending of The Crying Game, where the innocent Fergus “saves” Dil by himself claiming he is the killer, here we never discover what happens to Simone and Cathy when the police show up. Might they have to give up their freedom once more? So too does the work finally become a kind of “cold work of art,” of which Nat King Cole sings in the title song.

Yet the film closes with George secretly meeting with his daughter, whose mother refuses him contact, ending with a gentle kiss upon her forehead, suggesting, perhaps, that Simone has succeeded in domesticating her “lover,” like the painting of the Cole song, with only a smile.