William Wyler | The Best Years of Our Lives


period of adjustment
by Douglas Messerli

Robert E. Sherwood (screenplay, based on a story by MacKinlay Kantor), William Wyler (director) The Best Years of Our Lives / 1946

Winner of seven Academy Awards in 1946, including Best Picture, Best Director, Best Actor, and Best Supporting Actor, William Wyler’s The Best Years of Our Lives is the kind of film that both critics and audiences love. It is one of the most attended films of all time, and revived nearly every year on television for Memorial Day, when I generally watch it once again.
The film’s beautiful long focuses, its superb actors, including three of my favorites, Myrna Loy, Fredric March, and Teresa Wright, with wonderful performances by Dana Andrews and Harold Russell enhance its weighty subject, the return home from the war of three men and their difficulties reassimilating into the post-war culture. This work is so likeable, in fact, that it seems down-right Un-American not to describe it, as New York Times Film critic Bosley Crowther did, upon its premiere, as “superlative entertainment” that is also “food for quiet and humanizing thought…”

Yet each time I see it again, I find this weepy melodrama a bit more stale than the last viewing, and I have never admired it much. Perhaps it is its very meticulousness that bothers me, those touching scenes between the former seaman, Homer (Russell)—who has lost his hands in an aircraft carrier bombing—his family and girlfriend, Wilma; the intensely quiet love between the former air force captain, Fred Derry (Andrews) and the young and radiant Peggy Stephenson (Wright); and the more than supportive family of Sergeant First Class Al Stephenson (Frederic March)—each of them in their turn reiterating like a Hallmark card small town American values. For Homer, obviously, the central problem is his disability, for Fred it is both a bad marriage and the fact that, with little prewar job experience, he must now report to a man who once worked for him. Al finds it hard to return to his loan officer job at the bank, where he is now personally committed to offering loans to former soldiers without collateral, an action opposed by the bank itself; Al also spends a little too much of his time with alcohol. Together, the three run into each other again and again, seemingly preferring one another’s company more than the wives and girlfriends to whom they have  returned.
In fact, when they cross paths, trouble seems to be stirred up: Al’s daughter falls in love with the married Fred, and Al is forced to demand Fred stay away from her. Fred, socking out a man who has taunts Homer, loses his job. At a banker’s banquet, a slightly inebriated Al argues for his belief that the bank must stand with the vets, endangering his own position.

Yet despite of all the “difficulties” which this film expounds, these men, who have given up “the best years of their lives,” seem relatively unfazed. The women in their world, accept for Fred’s wife Marie, are all loving and supporting, their families are willing and ready to help them to readjust. Not one of these men suffer posttraumatic stress disorder (although an early version of the script was to have included that) and none of them are terribly violent nor depressed. They do not even feel sorry for themselves, and even the victimized Homer comes around to feel safe with Wilma to help him, marrying her in the end. 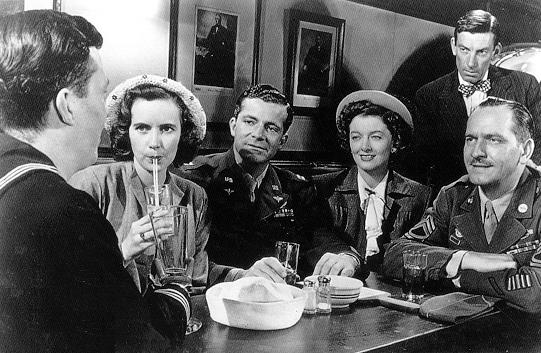 If the script seems to demand our sympathy and even tears, in the end, it all appears to have been to no avail, as everything gets tidied up, Peggy finally linking up with Fred, and Al nicely readjusted in the arms of his loving wife (Loy).
Like so many of Wyler films, this movie is simply too slick. Everything is done so gracefully and stylishly that we ultimately feel little emotion and even less need for rumination, let alone deep thinking. This film, unfortunately, hardly dares to take on its own subjects. And Wyler makes no attempt whatsoever to explore what might have been the loneliness and isolation of those left behind at home.
As David Thomson has subtly expressed it: “It would have taken uncommon genius and daring at that time to sneak a view of an untidy or unresolved American past Goldwyn or the public” of the day. Yet it is just that “untidy” and “unresolved” world which might have made The Best Years of Our Lives a great film, allowing it to truly explore the issues it broached. Wyler had neither the daring nor genius. As it is, his work simply glows out like well-lit room, encouraging its heroes to come inside and get back to normal life.