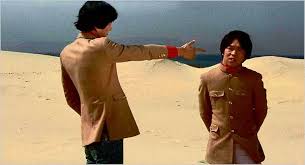 In Three Resurrected Drunkards, Japanese director Nagisa Ōshima uses a 1960s comic genre to discuss far more serious issues. Like a mix of the Beatles’ and Monkees’ movies and Jean-Luc Godard, Ōshima takes his three musicians of the Japanese band The Folk Crusaders through a series of semi-comic, self-conscious adventures.
On a beach, this group of mismatched drunkards, Kazuhiko Kato (described throughout as a “beanpole”), Osamu Kitayama (shorter), and Norihiko Hashida (very short) somewhat darkly point their fingers at each other’s heads in a goofy mock re-enactment of the famed Eddie Adams photo of a Vietcong guerilla being executed, The Folk Crusaders hit song, “I Only Live Twice” playing in the background. If the game there are playing has more dark undertones than comic ones, so too does their somewhat blasphemous song about heaven being a place where “the booze is good and the girls are pretty,” run by a god who is an “old meany.”
That soon is played out within the plot, as the three go swimming, their Japanese soldier uniforms being stolen from beneath the beach by a hand that replaces their uniforms with those of Korean soldiers, along with some money. Returning from the water, two of them are forced to dress in the Korean costumes, while beanpole retains his own dress.

From that outward transformation, along with their insistence to a local tobacconist that a popular brand of cigarettes costs only 40 yen (the real price is higher), things go quickly from bad to worse, as the police begin following them and other beach dwellers are on the attack. Only a mysterious woman is evidently willing to help them, suggesting they steal other’s clothing. At a local spa they try just that, but are suddenly attacked by the Koreans who have stolen their clothes and are forced to return to their Korean costumes, as they are captured and sent to Korea’s Pusan Bay, before being sent away to Viet Nam to the war in which they die.
Waking up once more to see the mysterious girl hovering over them, the three change, this time into her dress and blouse, attempting to get away once more, only to meet up again with two AWOL Koreans, who restore them to their Korean identities.

Ōshima’s theme, clearly, is the Japanese xenophobia, in particular their hatred and dismissal of Koreans. On the streets of Tokyo, the three, film camera in hand, ask citizens a simple question: “Are you Japanese?” which each time gets answered with the words “No, I’m Korean,” clearly satirizing the real situation of racial purity. And when the film suddenly begins all over again, including the ocean swim, the robbery, the event at the tobacconists and the attempt to steal clothes at the spa, the trio answer their questions slightly differently, this time admitting and even embracing their enforced Korean identities.


Nonetheless, the three find themselves in a further series of misadventures, particularly because one of their group has fallen in love with the mysterious and helpful woman, whom, they have discovered, is also Korean.


It hardly matters what happens in the end, for everything in this film happens over and over as in a surreal dream, the story forever repeating itself due to the Japanese society’s clear inability to learn from history. The last scenes of the film take us to a mural that portrays the very scene which trio was imitating in the very first scene, a horrible image of Asians murdering Asians, just as the boys had pretended to shoot one another at the beach, the director revealing that the comedy is, in fact, a tragedy the society must face.