I wrote about Michael Powell’s notorious film, Peeping Tom, in July of 2013. In this morning’s paper, June 8, 2014, I read of Böhm’s death 11 days ago in Grödig, Austria, and determined that it was fitting to link it to that sad event.


Böhm first became famous as a popular lead, playing Emperor Franz Josef of Austria in a series of films in the 1950s, including Sissi (1959), Sissi, the Young Empress (1958), and Sissi: The Fateful Years of an Empress (1957). Although these roles gained him a great deal of attention in his homeland, Böhm soon became tired of being typecast as a handsome young prince, and decided to take a chance on playing the murderer of Michael Powell’s 1960 thriller, Peeping Tom. According to film legend, Powell determined to hire Böhm for the role because he felt the young matinee idol might know what it felt to have an overpowering father, which like his character, made life nearly unlivable. Böhm’s famous father was the great Austrian orchestra conductor, Karl Böhm, who continued to conduct in Austria throughout the Hitler era, and often gave the Nazi salute upon taking the podium.


During the war, Karlheinz was sent to be educated in Switzerland, later studying philosophy at the University of Graz, quite apparently sharing neither of his parents views.


If Böhm had hoped for a career break in Powell’s film, he was to be more than disappointed with the results of performing in Peeping Tom. The British critics and public were horrified by Powell’s vision, and the film ended both his and his partner Emeric Pressburger’s filmmaking careers—as well as categorizing Böhm as a kind of cinema untouchable. He did act in The Wonderful World of the Brothers Grimm (1962), and he later joined Werner Fassbinder’s acting ensemble, performing in three of his films (Effi Briest, Fox and His Friends, and Mother Küsters’ Trip to Heaven) and in Fassbinder’s television work, Martha.


Soon dissatisfied with acting, however, Böhm turned to charitable concerns. After making a trip to Ethiopia, were he witnessed starvation and other diseases of poverty, he founded the group, Menschen für Menschen (Humans for Humans), in order to raise money for famine relief, educational and medical supplies, and for the development of projects in agriculture and water purification.


In 1991 he married an Ethiopian archaeologist, his fourth wife, with whom he had two children. In 2001 Böhm was made an honorary citizen of Ethiopia. His own comments, published that year in The Guardian reveal a humility and true concern the people who benefited from his projects: “I didn’t come as a stranger to show them what they have to do to get out of their poverty,” he noted. “I tried to find out what the people are missing, and how they can help themselves. …I don’t live for myself any more, but I live for other people.”

Los Angeles, June 10, 2104
The above information is based on an obituary in The New York Times by Paul Vitello.

within ourselves
by Douglas Messerli

Today it is a bit difficult to comprehend the British reaction to director Michael Powell’s 1960 feature film, Peeping Tom, a work that literally ended his career in the United Kingdom. British audiences have often turned against some of their greatest artists, and even today, I would argue, British literature is far less adventurous than literature throughout Europe and in the United States. Yet, it is hard to forget, that British-born director Alfred Hitchcock had already (even in his early British films) set up the very concerns of his younger friend’s and former assistant’s film. Surely Hitchcock’s American picture of the same year, Psycho, was far more brutally explicit in its “shower” scene than anything one actually sees in Peeping Tom. And by today’s standards, although Peeping Tom is still a very “perverse” film, its murder and sex scenes are completely understated.

One is tempted to suggest that Powell somehow linked his audience with the voyeuristic actions, leading to the “hero’s” murder of several women. Like Powell himself, the central character,  Mark Lewis (the beautiful Karlheinz Böhm, son of Austrian conductor Karl Böhm, the son later working in three Fassbinder films) is a cinematographer, filming not only for a cinema studio, but working privately in filming porno and what he describes as a  “documentary” which reexplores the studies in fear that his psychiatrist father (played, in a cameo role, by Powell himself) had imposed upon his young child by awakening him with lights flashed into his eyes in the middle of the night, throwing lizards upon his bed, and even recording his reactions to the child’s mother’s death. The camera in Peeping Tom is in action almost constantly, catching every moment of terror, reaction, and investigation into the events. In Psycho, although the major character (Anthony Perkins) is certainly appealing in the same way as Lewis, he remains an outsider, a kind of freak or, at least, a tortured insane being; the woman he murders, moreover, is already a kind of marked woman: she has stolen money from her employer, while the prostitutes and simple would-be actors of Powell’s tale are relatively innocent of anything but desire. Yet Hitchcock had explored very similar themes already in Rear Window, where the central character, also a photographer, played a voyeur with destructive results to his neighbors. In Vertigo, moreover, Hitchcock had explored a man following a woman with clearly obsessive tendencies, a situation which, once again, resulted in a murder, albeit not of the woman we first perceive her to be.


Perhaps it is the very genius of Powell’s work that provoked his audience into seeing themselves as not very respectable people: his not so gentle poke in the ribs of conservative British gentlemen stopping into their local tobacconists for copies of the rightist papers while at the same time purchasing home-shot porno which they wrap within the papers themselves; or Powell’s not so subtle attack on psychiatrists, who go so far as to torture their children in their search for comprehending psychological reactions (indeed, the father-son relationship here calls up the Nazi experiments on Jewish children); and, finally, Powell’s utter put-down of the whole film-industry in which he was a major figure, mocking the popular medium of the time, whose plots consist of a woman fainting and asking, as a comic effect, for variously colored trucks. When Lewis, filming the always splendid Moira Shearer, kills her and locks her away in the blue trunk, the bogus filmmakers change the star’s request to see similarly variously colored hats.

Powell also, unlike Hitchcock, embraces an utterly curious and pleasant individual, Helen Stephens (Anna Massey), and her often drunk but perceptively canny, blind mother, Mrs. Stephens (Maxine Audley) into his story, involving them, as tenants in Mark’s house (he, being also the landlord). By doing this, Powell certainly arouses his audience’s fear for this intelligent and friendly Helen, and, when Helen’s mother confronts him, fear for her life as well. The very fact that in these cases our murderer resists his murderous impulses, partly by averting their eyes which might demonstrate their fears (the blind mother, obviously, having no vision, and therefore is not useful in Lewis’ tortured experiments) perhaps helps us to perceive the figure not entirely as a fiend, which, given his several murders and his own suicide help to make the film even more seemingly perverse. That someone may actually love the tortured psychopath Lewis, may seem to many as utterly mad. The fact that he is so beautiful and mild-mannered further confronts our very sensibilities that evil should be easily identifiable and clearly marked. Here, the evil is presented as also existing within the society and within ourselves. 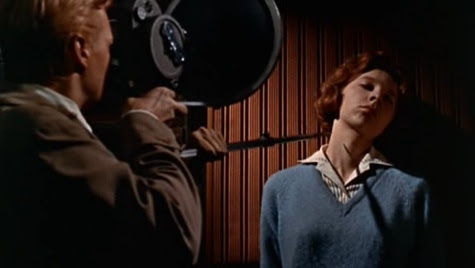 Looking back, Peeping Tom does not seem so very far from the obsessive figures, the young nun of Black Narcissus, the dancing beauty (again Moira Shearer) of The Red Shoes that Powell had successfully presented in his other highly theatrical, artificed, hot-house movies. And fortunately, the critical blacklash of 1960 has been replaced with recognition of just how great this film is. I’d certainly agree with Martin Scorsese’s comments, that Peeping Tom and Fellini’s 81/2 “say everything that can be said about film-making, about the process of dealing with film, the objectivity and subjectivity of it and the confusion between the two.”* Clearly Powell was not the first of film geniuses to be unrecognized and even vilified within his own time—there are dozens of examples—but the very sadness of those reactions, even as temporary as they may be, always brings tears to my eyes. Where might have Powell gone from Peeping Tom? No matter how much you might like all Hitchcock’s films, one still has to recognize that from Psycho on, even with some few exceptions, his career was in decline. Perhaps, Powell also had taken his concerns to the end of where he dared not continue. We shall never know.

*You can certainly see the effects of Peeping Tom on Scorcese’s Taxi Driver, where the mirror becomes the camera for its deranged hero.