Pedro Almodóvar’s new film, which he, himself, describes as “a light, very light comedy,” is not one of his major pieces of cinema, and, at times is almost as light as a piece of peanut brittle, seemingly ready, like the plane in which his characters are trapped, to snap in half. A slight riff on everything from Hitchcock’s Vertigo and, perhaps, even Mel Brooks’ satire of the same, High Anxiety, Almodóvar’s work also calls up, at moments, the Zucker brothers’ Airplane! even referencing, so it seems, Priscilla, Queen of the Desert. 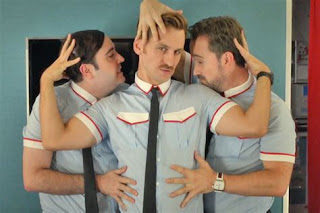 Almodóvar’s tale has absolutely no plot, but consists of conversations among a group of obsessed passengers (the original title can be understood as either “the fleeting lovers” or “the passenger lovers,” although I’d like to translate it is as “loving passengers”) in the business class cabin of an airliner which has lost its landing gear and is, accordingly, forced to endlessly circle while authorities seek a safe place for it to land. The economy class passengers have all be given a muscle relaxant to put them to sleep. The two pilots (Antonio de la Torre and Hugo Silva) and three business-class stewards (Raúl Arévo, Carlos Areces, and Javier Cámara) are all gay—even though the co-pilot doesn’t at first perceive, as the pilot describes him, that he is “a faggot,” and the pilot, despite his having an affair with one of the stewards, defines himself as bisexual. The crew’s obsession, predictably, is simply sex. While the “loving passengers” have other obsessions: the banker Sr. Más (José Lujis Torrijo) is clearly focused on money; the famed dominatrix, Norma Boss, seeks power; the movie actor Ricardo Galán is attempting to escape his failed relationships with two women; while Bruna (Lola Dueñas) is seeking acknowledgement and fame for her skills as a clairvoyant; and the new married couple (Laya Martin and Miguel Ángel Silvestre) are seeking marital bliss, and Infante (José María Yazpik), a self-described security advisor and hit-man, is seeking out death, even though he’d like to get out of his business. The movie spends most of its energy revealing the obsessions and their effects. 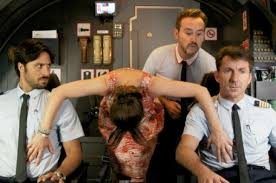 In Spain, where the economy, much like Almodóvar’s airplane, is perpetually circling in order to find a safe place to end its bumpy journey, this work probably has more depth. I am sure that, in particular, the dominatrix’s purported files of clients from the King on down to nearly everyone in government has far more humorous resonance for the Spanish audience than it does in the US. But, even then, this is not, in any sense of the imagination, a profound or even complex work.


Nonetheless, it seems pointless to “trash” the movie as did the usually fine and sympathetic critic Manhola Dargis, writing in The New York Times: “the journey generally drags because the spinning characters, with their tired jokes and familiar melodramas, soon feel so mechanical, like the automated parts in an Almodóvar machine”; or, even worse, Michael O’Sullivan’s ungenerous comments in The Washington Post: "I’m So Excited misfires on so many levels—tiresome plot; crude, juvenile humor; broad, stagy acting and absurd characters; claustrophobic setting; and dull art direction—that it’s hard to imagine it was all accidental.”

True, at moments Almodóvar’s film sputters as if ready to go into a dive, but by and large, it flies by as a campy, vamped-up soap-opera in the manner of…well, Almodóvar himself, channeling someone like the great filmmaker of 1950s melodramas, Douglas Sirk. At the center of this “slight comedy,” moreover, is an absolutely charming and delightful drag-like rendition of the Pointer Sister’s energetic “I’m So Excited” that is performed so hyper-kinetically perfect by the three stewardi that I laughed through my joyful tears. Their entertainment, along with the heavily spiked drinks they have just served up, suddenly send almost every still-awake passenger and crew member into state of passionate lust, which reveals that underneath each of their obsessions what they really need is just to be loved or, at the very least, get fucked. Incidentally, I found the costumes and art direction to be near-brilliant.


If Almodóvar’s message is a simple one—that life, in fact, is a kind of circling through space where all we can do is to admit our failures, to love one another, and help one another to get through the voyage—it, nonetheless, resonates with a certain sentimental profoundness that is paralleled in all the character’s final reconciliations with themselves and one another, a gentle love-fest that few other motion pictures this year have been able to dish up.