Alfred Hitchcock | To Catch a Thief

to catch a husband
by Douglas Messerli

With the recent multi-million jewelry robbery at Cannes—at the Carlton Intercontinental, the very hotel featured in Alfred Hitchcock’s 1955 movie, To Catch a Thief—I determined to revisit that film, which I have seen many times in my life.

The general feeling about this film is that it is nothing but a light entertainment, a romantic caper that has little, if any depth. And, indeed, that is, for the most part, the obvious way to read Hitchcock’s early work, particularly in light of the far greater and complex works such as Shadow of a Doubt of 1943 and his deft cinema of only the year before, Rear Window. Yet, there are far deeper issues at play just underneath its witty script and the tourist-like documentary of its surface.

Part of the problem is that the plot, such as it is, is centered upon a very weak conceit: several former jewel thieves, mostly working separately, came together during World War II to work for the underground, earning pardons from their numerous post-war crimes in return for their commitment to live crime-free lives. Some of them, such as the noted “Cat” John Robie (Cary Grant) have ended up quite well off, he living in a lovely stone house above the Riviera, tended by a loyal servant, where he grows grapes in his vineyard, and tends to other garden plants. A former crime friend, Bertani (Charles Vanel), now owns a posh restaurant serving up meals to wealthy tourists, with another former thief, Foussard (Jean Martinelli), working as his restaurant assistant.  Others, now serving in the restaurant’s kitchen, have made little financial progress in their lives, despite their straight living, and are still quite bitter about the apparent class differences. More importantly, someone has again begun to steal from Cannes’ wealthy visitors, using the same methods of the famed Robie; both the police and his former friends suspect he has gone back into business.

Realizing his predicament of having every day to prove his honesty, Robie decides to go “under cover” in order to find out just who is the “copycat.” In truth, any suspense about who is the actual thief, hardly matters. What Hitchcock slowly reveals to us is that almost anyone and everyone of the film’s numerous figures might as well be thieves, from H. H. Hughson (John Williams), the insurance agent whose company has insured most of the jewelry, and has no problem about stealing soap and towels from various hotels and deducting free meals from his expense account, to Foussard’s daughter, still in love with the dashing Robie—who has taught her English—and is perfectly willing to run away with him to South America. Nearly all of his old associates are equally suspects. 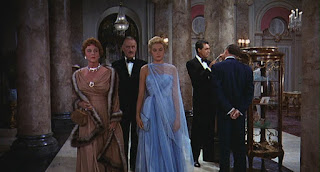 Although we know they are not guilty of the crimes, we might equally be tempted to call the two American women, Jessie Stevens (the wonderful Jessie Royce Landis) and her beautiful daughter, Frances (Grace Kelly) as being thieves themselves, one the wife of a wonderful American rogue on whose Oklahoma land oil was discovered, while her daughter, whom she declares was “finished” in finishing school, is on the hunt for a wealthy husband, and, quickly seeing behind Robie’s cover as an Oregon lumberman, is only too ready to become the “cat’s” new “kitten.” Even Robie’s servant has once strangled a German with her bare hands. In short, there is not a single character in this “comedy” who is entirely admirable, which is, in part, what makes it more fun and more complex as a work of cinema than it first appears. Each character wants more out of life than he currently has—except, perhaps for Robie, who admits:

Why did I take up stealing? To live better, to own things
I couldn’t afford, to acquire this good taste that you now
enjoy and which I should be very reluctant to give up.

The world of To Catch a Thief is less interested in finding the thief behind the recent jewel heists than it is in acquiring the good things of life and, in the case of the authorities, of saving face. And everyone in this film, as Hitchcock makes clear, is only too ready to “gamble” :

And gamble she does, high-jacking Robie as he attempts to check out wealthy and jewel-rich families, offering up a chicken picnic

Jessie Stevens: You want a leg or a breast?

John Robie: You make the choice.

Taunting Robie with her own diamond necklace (which he immediately recognizes as an imitation), she offers herself up to him in a verbally rich fusillade of sexually suggestive comments—recoiling only in this consumer-based paradise when the “cat” steals her own mother’s diamonds! Hitchcock’s women, apparently, are all ready to gamble as long it isn’t the family jewels. Only her utterly down-to-earth and honest mother admits she does not miss the baubles—as long as they’re insured! 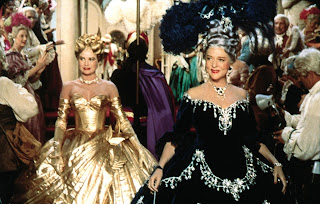 Despite Francie’s new disdain of her “Robin Hood” hero, she is still willing to play along in one final caper, in which Hitchcock again reveals not only the consumerism (Kelly dressed in a gold bullion gown), but the complete sexual surrender that goes along with such societal behavior, demonstrated in his wonderful, after party scenes at the mansion, where the variously costumed attendees are portrayed as if mimicking some Hollywood version of “The Decline and Fall of the Roman Empire.”

Once more the bisexual Grant as Robie, as in so many of his films, brushes off almost all of Francie’s sexual advances:

Frances Stevens: I’m in love with you.

And throughout Robie seems more comfortable with the British insurance agent, who he quickly invites up to his bachelor lair than with the American female beauty. Indeed at the fancy costume party where they finally hope to catch the thief, the fussy Brit actually becomes Robie's double—what else but a Nubian slave serving the gold-digging Yankees, as Robie stalks the rooftop in wait of his cat bandit, as far away as he can get from Francie's domestic treacheries.

Time and again, he defuses Francie’s sexual swoons, moving throughout the film in a calm demeanor against her and Danielle’s sexual insinuations. In this work, more than in almost any other of his career, Grant’s self-conscious bemusement and seeming absence of sexuality makes him even more attractive to anyone who might be drawn to his beautiful exterior. Everyone knows he’s ripe for the taking, except himself. And his final capture of the new “cat,” Foussard’s daughter Danielle, suggests his own emasculation: he has been quite successfully replaced by a female protégé.

Hitchcock culminates his consumerist satire with the final purchase, Francie rushing up to Robie’s lair immediately after his innocence is confirmed, insisting, just as had Carole Lombard in My Man Godfrey years before, her purchase of a new world: “So this is where you live? Oh, Mother will love it up here?”

Posted by greenintegerblog at 7:39 AM