the other side of the self
by Douglas Messerli


“Every schoolchild knows the story of Orpheus and Eurydice,” begins Jean Cocteau’s film, repeating the ancient myth before rolling off into its own hardly recognizable version. For Cocteau, it appears, is far less interested in the love between the original couple than he is in Orpheus himself. Indeed, the director is portrayed as Orpheus (as Cocteau wrote during the film’s making, “It is much less a film than it is myself.”), a highly successful poet who, we discover in the first scene, is scorned by his own poetry community. All the general criticisms of Cocteau—that his writing was basically unoriginal, that he stole from numerous other writers, and that his works were lacking real experimentalism—are called up in Orpheus’ discussion with an older poet, before the young rival, Cégeste, appears on the scene, calling up Cocteau’s own affair with the young poet Raymond Radiguet, whose death decades before, as Mark Polizzotti writes in the notes to the Criterion edition, “still haunted him.” The fact that Orpheus was performed by Cocteau’s former long-time lover, the handsome matinee idol Jean Marais, and Cégeste was acted by Cocteau’s current bedmate, Edouard Dermithe, further creates tensions between the artist in the film and the creator of the work of art.


If I were to recount the plot of the rest of this film, for those who have never seen it, I might be perceived as ridiculous and possibly not to be believed, so I’ll forego the storytelling. It hardly matters, in any event, for as those who have watched this “incredible” piece of cinema, the landscape is a mix of a dream world and the personal that hardly ever comes up for breath into solid ground. In Cocteau’s telling the somewhat plain but pleasant Marie Déa is less a lover than she is a slightly pampered, mostly ignored wife. For Orpheus’ true love is on the other side of the mirror, where death waits, performed brilliantly in Cocteau’s fable by great dramatic actress, María Casares. As the dead chauffeur, Heutebise (François Périer), tells Orpheus:

I am letting you into the secret of all secrets, mirrors
are gates through which death comes and goes. Moreover
if you see your whole life in a mirror you will see death
at work as you see bees behind the glass in a hive. 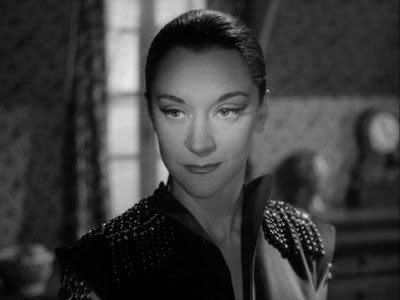 From the very moment he encounters the Princess of Death, observing her and the now dead Cégeste passing through a mirror, the poet cannot help but attempt the same action, frustrated by the hard surface of the glass, but equally fascinated by whom he encounters there. For Cocteau, it is quite clear, the Orpheus myth also involves the story of Narcissus, as Marais in a grand theatrical manner, plays to himself, enjoying the image of his own pompadour-topped beauty.  If he thinks he has fallen in love with Death, it is also clear that it is not the black-clad ice-cold beauty whom he attempts to follow throughout the film, but the other side of himself. 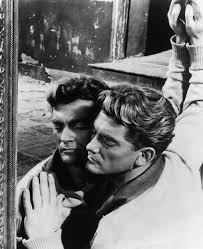 The moment Orpheus encounters both Cégeste, the eighteen-year-old adorned by all, and his companion, the dark beauty of death, he seemingly no longer cares for his wife. And if he is fixated upon death, so too he is utterly transformed by the strange messages being sent over death’s car radio, which later, we discover, are being created and transmitted by the dead Cégeste; and through Orpheus’ intense attention to these messages—one of them, “The bird sings with its fingers,” stolen from the poet Apollinaire (an icornically purposeful act of  plagiarism for which Orpheus himself is later accused by the poetry community, Cocteau’s “furies”), we also perceive that the older poet is now also in love with (at least through his words) the younger man.


If that weren’t enough, Cocteau creates a strange bond between the dead chauffeur, Heurtebise, and Orpheus, who brings both the car and the driver into his house. Heurtebise, in turn, falls in love with the now neglected Eurydice, and it is his love for her, not Orpheus’, that sends the poet into the land of the dead to retrieve her.


Even here, moreover, Cocteau creates another kind of homoerotic bond, as Heurtebise takes Orpheus’ hand and shoulder, leading him through the Zone into death’s realm. In short, Orpheus is in love with himself, first, with Death, and, indirectly with Cégeste and even Heurtebise, as opposed to Eurydice. Is it any wonder that, in order for her to return to life, the husband is commanded not to set eyes upon her again—a problem which further frustrates and infuriates him. Both Orpheus and Eurydice are trapped through the command to live with one another without the ability to express love or hate (you can neither love nor argue with someone you cannot see), and both, at moments, become determined to break the rules, destroying each other in the process. Orpheus’ look into the car mirror to glimpse his wife seems almost like a determined attempt to rid himself of her—allowing him, since it will also mean his own death, to be enveloped in the arms of the Princess.

Indeed, as in the original myth, the angered mob of young poets and determined “Bacchantes,” feminist writers in Cocteau’s witty telling, kill him, and, once more, with Heurtebise (the Charon of this tale) he is transported into death’s realm, Death, in her impatience waiting for him to arrive, momentarily experiencing human time.


The strange twist at the end of this tale is more explicable if we comprehend that all three of his lovers—The Princess, Heurtebise, and Cégeste—perhaps perceiving that each is secondary to Orpheus’ central love, himself, erase him from their thinking, allowing him to go back in time, and to return to his loving Eurydice, as if she has just awakened from a nightmare nap.


If we find Orpheus’ sudden caring for and embracement of his previously neglected wife, a bit unbelievable, we must nonetheless recognize that through death—and by extension through immersion in the self—the artist is redeemed so that he might, through his creation, continue to survive in the everyday world of “baby clothes and bills,” at which Orpheus had earlier chaffed. So has the self-pitying poet surprisingly (he has been told by the older poet to “surprise them”) discovered another concept of “the other side of the self,” a self that lives in the mundane world of everyday being.