finishing what you start
by Douglas Messerli


The penultimate film of Rainer Werner Fassbinder, Veronika Voss, is also, in my estimation, one of his very best. Shot in lush black and white reminiscent of 1940 Hollywood productions, nearly every frame is stunningly beautiful in this heady mix of suspense thriller, romance, tough film noir, and gangster movie that engages its viewers at all levels. Part II of the loosely connected BRD Trilogy (coming between The Marriage of Maria Braun and Lola) this film is also highly political, revealing a postwar, 1955, Munich as a city of figures caught in the past, attempting to blot out not only the present but all consciousness. The former World War II movie star, Veronika (Rosel Zeach)—unable after the war to regain her movie star status, and gradually losing her beauty and, through the morphine to which she is addicted, her mind—represents, clearly, Germany’s Nazi past, Veronika having been a protégé of Goebbels. But that is only one side of the coin in a film that is filled with doubles and mirror images. On the other side of war-time sufferers is an old Jewish man who has survived the death camp Treblinka who uses the same doctor as Veronika, Marianne Katz (Annemarie Duringer), to obtain morphine to obliterate his memories. 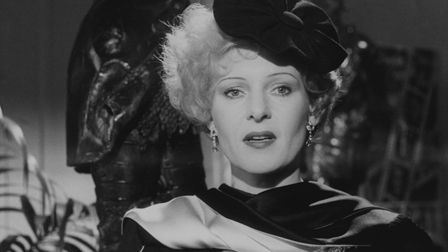 Into this city of the dead steps Robert Krohn (Hilmar Thate), a vital newspaper sportswriter, who accidentally encounters Veronika after she has escaped from a showing of one of her long-ago films (the double image occurs in this first scene, as the film’s director, Fassbinder, is seen sitting beside the suffering actress being shown a scene similar to that which will be played out later in the film); unable to bear the image of her younger self. She bolts, discovered in tears by Robert in a nearby forest. A man of the “real” world, Robert does not even recognize the aging beauty, but gallantly offers to accompany her home, offering her his umbrella and arm for protection. A bit like Blanche DuBois in A Streetcar Named Desire, Veronika perceives him as a kind of “gentleman stranger” offering her “a safe haven in a storm.”
Later, like Blanche in that earlier film, Veronika will time and again ask for the lights to be dimmed so that the wrinkles and aging spots of her face might go unnoticed, allowing her, as she admits, to seduce defenseless men like Robert. Similarly, like Blanche, Veronika is a figure out of the past, offering up her former mansion as well as her jewelry to her doctor in payment for her “treatments.”  Robert, we soon discover, is truly defenseless, agreeing to meet with Veronika in a posh restaurant the very next day, where she exhorts from him 500 marks so that she might buy a broach she has spotted in the hotel lobby. When they finish lunch, she returns to the store to ask the clerk if she might return the jewelry for money; fortunately, for her, the shop-owner (Lilo Pempeit, Fassbinder’s mother, who appears in most of his films) recognizes the actress—and who, like Veronika, calls up, with some fondness, the German war years—is only too ready to comply. Accordingly, Veronika has tricked the innocent reporter out of cash she very much needs for her addiction. In retribution, however, Dr. Katz later returns the money to Robert.
Utterly out of his element in this world of dreamers, Robert discovers himself being strangely drawn to the mysterious woman, and is swept up into her horrific world. Obviously, this world also parallels, as most critics have noted, the one into which American actor William Holden, equally by accident, steps in Billy Wilder’s Sunset Boulevard, where the equally delusional Norma Desmond madly rules; like Norma, Veronica spends much of Fassbinder’s movie trying to get back into filmmaking, finally convincing a director to cast her in a couple of scenes of a new movie, which end, like Norma, in her mental collapse.
These allusions to other films, in fact, serve as further mirroring images, doublings that Fassbinder uses at every level. I am sure Tony Rayns is correct when he suggests that Fassbinder used a common “woman’s problem” genre, popular in the German cinema of the 1930s. But the director also calls up, in the blindingly bright all-white sanatorium, a kind of lit-up hell run by Dr. Katz, wherein Veronika often finds herself entrapped, the Lewis Allen mystery/romance film of 1944 The Uninvited, wherein the characters all must also face past ghosts (in this case quite literally) which threaten to tear apart their current lives and kill one of them. In that film, as well, a psychiatrist, a lesbian lover of the young heroine’s mother, imprisons the young girl with the intent to kill her. Fassbinder makes clear in Veronika Voss that his heroine’s involvement with her doctor is not merely her drug addiction, but derives from her need to be loved; and that relationship is revealed—particularly given scenes with the doctor’s assistant, Josefa—as a lesbian one. Despite Robert’s later attempts to free her from the clinic in order to help Veronika come to terms with the “real” world, the actress lies, revealing her masochistic attachment to the self-destructive situation. 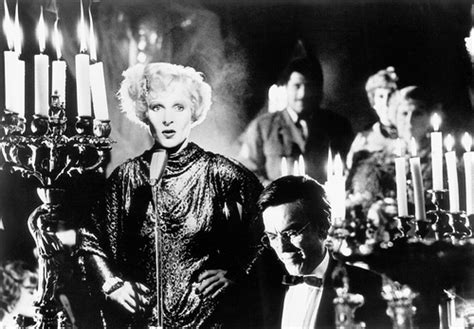 Later, incidentally, after observing Veronika’s breakdown and encountering her former husband, screenwriter Max Rehbein (Armin Mueller-Stahl), Robert and he share a few beers, resulting in what appears as far more than a male-bonding relationship, Rehbein, in particular, almost caressing and holding the drunken Robert, begging him not leave.
There are similar connections with numerous other films, even including George Stevens’ 1942 Hepburn-Tracy “comedy,” Woman of the Year, wherein an equally clueless sportswriter attempts to woo a brilliantly strong-willed beauty and bring her into his reality, but ultimately fails.
Many critics, moreover, have observed the strange use of music by Peer Raben throughout, mostly American songs which might have been heard on German radio during those postwar days. These have generally been described as creating a kind of irritating and disorienting feeling (much like the visual use of Fassbinder’s lover Günther Kaufmann, an African-American GI, who speaks only in English, who appears as a kind of minion to Dr. Katz’s evil empire—but, in fact, is busy wrapping up extra drugs from the clinic for sale in the illegal market outside). Certainly, the zither-like tunes, the intrusion of country-western ballads, the heavy beating of a kettle drum—are irritating. But they are also thematically important, creating yet more “mirror-like” allusions, which enrich this already thickened film. The zither music, as Roger Ebert, perceived, reminds one surely of The Third Man, another movie about postwar Europe that involves evil intentions regarding drugs, and centers upon the arrival in Austria of a kind of cowboy like character—a writer of westerns, Holly Martin—who is equally unable to make sense of the world around him.
At one moment I thought I heard remnants of the song that accompanied the trail by Robert Mitchum in the 1955 film The Night of the Hunter, as he attempts to track down the innocent children whom he intends to murder. Later, I listened through the score again, but couldn’t precisely find that passage. But I most certainly did hear bits from the Tennessee Ernie Ford classic country-western song, “Sixteen Tons,” an appropriate choice for a story about a woman  indentured by her doctor:

You load sixteen tones, what do you get
Another day older and deeper in debt
Saint Peter don’t you call me ‘cause I can’t go
I owe my soul to the company store


In short, just as Fassbinder uses the references to 1940s films, so too does he use music, reiterating and mirroring the conceits of the picture.* These tunes are not simply “irritating” background noise.     Finally, like the ridiculously innocent Holly Martins of The Third Man, Robert is a kind of American cowboy, not only defenseless, as Veronika puts it, but, as he describes himself, a man who is determined to “finish what he starts.” What he discovers in his amateur sleuthing, however, is something that puts him completely out of these villains’ league: government and the evil Dr. Katz are in collusion, the two of them torturing not only people on both sides of the horror of the German war, but killing Robert’s girlfriend when she attempts to frame the doctor. Unknowingly, the police support their acts. And even Robert, at film’s end, finally refuses any further involvement. He has been defeated, and, perhaps for the first time in his life, cannot complete what he has begun.
When the elderly Jewish couple commit suicide earlier, leaving their house and antiques to Dr. Katz, it is inevitable, we perceive that Veronika must follow them in “closing the book.” Allowing her one last foray into an imaginary past—this one calling up Josef von Sternberg’s The Blue Angel, Dr. Katz locks her away in a small room, without morphine, but with a large stash of sedatives. Veronika, awakening on Good Friday, is desperate to relieve her pain. Staring into a mirror, she carefully makes up her lips before swallowing a bottle of the pills.
No longer an innocent—Robert now knows the complete involvement of the head of public health and the drug-dealing doctor—our would-be hero rejects any attempt to “finish” his reporting duties, declaring, quite cynically, that “journalistically speaking” it is not much of a story.
In Veronika’s death scene, in retrospect, the film suddenly jumps out of its several mirror-like frames into real life. For a few months later, Fassbinder would replay the scene, overdosing—either accidently or intentionally—on drugs, and, in that act, finally carrying his cross into Robert’s “real world.” **


*Fassbinder carries this doubling to extremes in the scene with Robert and his drunken girlfriend as they comment on the two “Walters,” she, evidently, uncomprehending the two famous soccer-playing brothers, Fritz and Ottmar, were being both referred to by their last names.


**Fassbinder’s last film, Quarelle, unedited at the time of his death, might most definitely be described as not of “a real world,” representing as it does a kind of highly decoratively colorized hallucination of a gay paradise of sado-masochistic masculine beauty. Certainly, it seems to me, it is something not of this world, which, the characters in Veronika Voos, as much as they which to escape it, are forced to face.
Posted by greenintegerblog at 8:42 AM