mirrors without an image
by Douglas Messerli

Jiří Menzel (screenplay, based on the novel by Bohumil Hrabal, and director) Obsluhoval jsem anglického krále (I Served the King of England) / 2006, USA 2008


Jiří Menzel’s 2006 film I Served the King of England is, like most of Menzel’s films, both a frothy comedy and a kind of tragic presentation of Czech history. In part the work of this loveable filmmaker has been determined by writer Bohumil Hrabal, who novel was the basis of this and other Menzel films. 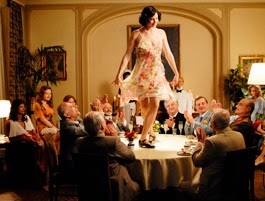 But while most of his works almost seamlessly in its revelations of the comic and tragic, as in, for example, Closely Watched Trains, I Served the King of England seems, at times, almost schizophrenic in its approach to the human condition. Its hero, the diminutive, but still dashing, blond-haired Chaplin-like figure Jan Ditě (the younger version played by Ivan Barnev), is a true innocent (in Czech, his last name means Child), almost a fool whose only desire in life, like a delirious schoolboy, is to become a millionaire. As critics have noted, his greatest goal as a young man is to give pleasure—which is why he is such a great waiter and a successful lover, a favorite the many women he meets—but he is similarly seeking only pleasure, which, much like a selfish child, is his major flaw. The first part of the film focuses on this pleasure-giving/pleasure-seeking world onto which Ditě has attached himself, a world of wealthy bureaucrats and industrialists, who spend their days eating and drinking and  their nights in bed with whores and paid escorts. First working at a local pub, then at the lavish spa, Hotel Tichota, and finally, under the tutelage of the Maître d’, Skřivánek (Martin Huba)—who once served the King of England, as if that might explain his expertise at knowing what his customer's might demand—at the elegant Prague eatery, Hotel Pařiž. Indeed one might almost describe this first part of the movie as a representing an orgy of eating and sexual pleasures, and catalogue it as a kind of beautiful “food” movie, a kind of reverse spin-off of Babette’s Feast. Menzel’s camera, for this first part of the film nearly swoons in the grandeur of its sets, food, and sexual joys, following the dancing waiters as they gracefully turn about their tables and, at one point, when an actress lies, with open breasts, upon a table spinning round her admirers, the camera itself spinning off into a blur of space. 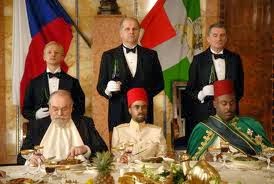 One of the most charming and disarming scenes is the arrival of Emperor of Ethiopia, where a camel carcass is stuffed with pheasants and pigs, in turn stuffed, in turn, by fruits and spices. Carefully attending to the Emperor, our hero suddenly discovers, as the  Emperor, even more diminutive than him, attempts to award the tall Maître d’, suddenly places the medal around the neck of the smaller statured Ditě.
Yet we know from the beginning of this fable that not all has turned our well for our hero, since in the very first scene we witness him being freed from prison after serving nearly 15 years. Throughout this series of sensual pleasures we can only wonder what happened. The second part of the film, accordingly, is devoted to the other side of his “innocence,” to the results of such a mindless and selfish search for pleasure and wealth. We also observe him after his release, working to rebuild a small bar, which once was part of a German community, along the Czech border to where he has been consigned. And we perceive the elderly Ditě (Oldrich Kaiser) as a man chastised, without the verve—although still with the libido—of his younger self: a tree-cutting musicologist, seeking trees suitable for producing musical instruments, and his beautiful, but troubled assistant appear on the scene, the latter attracting the attentions of the now aging “child.”


His downfall begins with what appears to be act of kindness, as he rushes to the defense of a young German woman being attacked by Czech ruffians, outraged over the Third Reich annexation of their country. Our hero seems almost oblivious of the political transformations of his world, and quickly falls in love with the young woman, Liza (Julia Jentsch), such an admirer of Hitler that she has posted a large portrait of the Führer in her bedroom to watch over her as she makes love. The “manchild” simply cannot morally comprehend, it is clear, the implications of her and others behavior, even when he forced to undergo a medical examination in order to marry her. Anxious to serve the Reich, Liza volunteers to become a nurse at the front, while Ditě returns to what was once the Hotel Tichota, now a home for nubile German women to breed with soldiers of the new “master race.” Like a eunuch in a harem, our hero is the only non-breeding male allowed daily “access” to the tall Nordic-like beauties surrounding him. 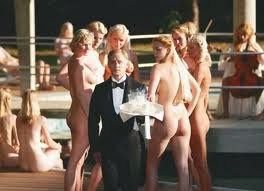 But here, the comedy is strained, since we all know that the truth the situation implies. Ditě, although never condemned by Menzel, has become a traitor, as several of his former colleagues, resistant to German intrusions, suddenly disappear. Even when Liza returns from the Polish front with masses of rare stamps stolen from the collection of a Jewish-Polish family, we recognize that her and her husband’s joy in their new-found wealth has been obtained, most likely, with the incarceration and murder of others. When the former spa is attacked by Allied forces, Liza rushes into their room to save the stamps, only be killed by the collapse of the building’s ceiling. Ditě, retrieving the stamp box for her hand, suddenly finds himself the wealthy man he has long sought to become.


By this time the gentle satiric and outright comedic film has turned sour, and we are not surprised, soon after, when the War has ended and the Communists have taken power, that the formerly “innocent” Ditě is found guilty simply for having so much money, and is sentenced to 15 years, commensurate with the 15 million he is now worth. Attempting in prison to finally join up with the millionaires of the first part of the movie, now also imprisoned, he is once more shunned by them. In his utter naiveté, Jan Ditě is a born loser. 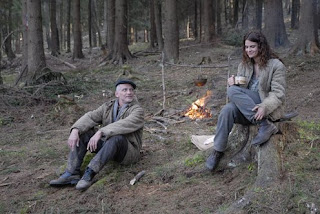 Accordingly, the aftermath of his story, a tale of unfulfilled desire and his Jan’s slow, patient reclamation of the destroyed past, is far less interesting that other parts of the movie, and, I believe, spreads a kind of pall across the film as a whole. Of course, in part, this more quiet section must be there to represent this idiot-child’s final recognition of the errors of his ways. But even when, at movie’s end, he tosses his remaining stamps into the winds of nature, I still find it difficult to forgive his self-enchanted treason. The bones of all those murdered Jews and soldiers killed by the Nazis rattle the film’s final credits, despite Aleś Březina’s spirited score.


Obviously, Menzel is preaching a kind of forgiveness, a burial of past stupidities. But this film’s everyman still seems too connected to the sensual pleasures of the palate and the flesh to ever quite forgive him for his unknowing sins. Although, in the final scenes he has gathered numerous mirrors into which he looks at himself in the present and the past—just as he has used mirrors and beer steins to project and distort his pleasures in the first part of this film— most of them reveal nothing, remaining blank are mirrors without an image to cast back. Perhaps the adult Ditě is simply a ghost, having died as the child he was.