Frank Capra | It Happened One Night

Robert Riskin (screenplay, based on a story by Samuel Hopkins Adams), Frank Capra (director) It Happened One Night / 1934

I stand somewhere in between those critics who praise the realism of film director Frank Capra’s presentation of everyday Americans and those who simply cannot abide the stereotypes and platitudes of  his often corny view of the world. I guess if I had to choose between the two sides, I’d agree with the “Capra-corns,” who mock his sentimental point of view. Certainly there is nothing at all “realistic” about his view of the rich and the poor. The heroes of his films, nearly always the down-and-out, love baseball, bus and train sing-alongs, and take great pleasure in the mobs of folk who people his busy streets. The rich, fat and haughty, are either outright evil or, at the very least, in need a good comeuppance, if not a swift kick in the pants. At their best, Capra’s likeable films (and there are several that I find quite unlikeable) are fables for an imaginary everyday man, the John Does of Depression desperation. 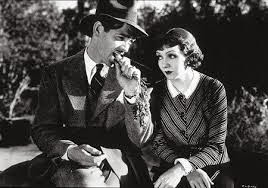 Even the movies that one might describe as examples of near-great film-making—It Happened One Night and Mr. Smith Goes to Washington—play out standard stock plots, with scripts that stink of the stable. When he gets his hands on a fairly witty screenplay, as he did in Robert Riskin’s adaptation of Samuel Hopkins Adams’ story, It Happened One Night, the director does nearly everything in his power to transform cleverness into the mundane.
Both his central actors in this work, Claudette Colbert and Clark Gable, were rumored to hate the story, with Colbert, in particular, angry about even having to work with Capra, showing it in numerous tiffs and tantrums throughout the shoot. After finishing the film, Colbert complained to an acquaintance: “I just finished the worst picture in the world,” and, determined that she had no chance of winning an Academy Award, was on a cross-country train at the very moment the Oscar ceremony announced her as the Best Actress of the year. Harry Cohn sent studio assistants to “drag her” off the train before it left the station.
Capra, in fact, worked with their enmity for him, beginning his movie with the boredom and rebellion of Ellen “Ellie” Andrews (Colbert), who has been captured aboard her father’s yacht in order to prevent her from marrying aviator, fortune-hunter “King” Westley (Jameson Thomas), and the drunken journalist Peter Warne (Gable) having just been fired. True love seems the furthest thing from these characters’ minds, and, in fact hardly is mentioned thereafter. Within moments, however, the film, begins its seemingly endless journey forward, as the characters, swim, bus, walk, hitchhike, and drive in the forward rush of this “on the road” drama—the comedy of the work sneaks in between the cracks, so to speak, in the characters’ disdain for one another—that ultimately takes them where neither really want to go. But that is just what is so delicious in this work—that Ellie, in attempting to reach her would-be husband, and Peter, in his black-mailing attachment to the wealthy socialite, are forced on a voyage to nowhere. The only events they experience involve “detours.” As critic Daniel Eagan describes the film’s plot:

A bag is stolen, a ticket is lost, a bus swerves off the road.
Money goes missing, rewards are offered, a car needs gas,
rain washes out a bridge…. 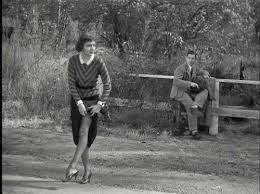 Neither of these figures, moreover, are particularly appealing: Peter is a “self-important,” cynical newsman who, as I mentioned, attempts to blackmail Ellie. As Ellie, herself, describes him:  “Your ego is absolutely colossal.” His answer, “Yeah, yeah, not bad, how’s yours,” says everything. Ellie, in turn, is an entirely self-centered consumer. As Peter describes her: “You know, I had you pegged right from the jump. Just a spoiled brat of a rich father. The only way you get anything is to buy it, isn’t it?”

Together, the two lie to small-town motel operators and detectives, use sex to catch free rides, and steal a car (although only after the driver has stolen their own bags). Neither of these figures—except in the visualizations of them by cinematographer Joseph Walker—is presented in romantic or sexy contexts. Despite their sharing a motel room, a simple blanket hung between them is enough to keep them out of each other’s arms and beds: Peter admits that because he has “no trumpet,” the wall of Jericho will not come tumbling down, as if hinting at his sexual impotency. A night in the hay results in little but straw clinging to their hair. 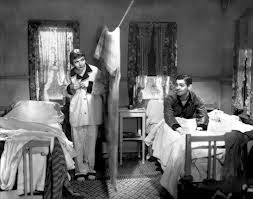 What the director seems to comprehend is that if you put two lovely actors in the same room for—not just the one night of the title but—several nights without even a kiss, the audience will all the more desire a consummation of the actors’ unspoken love. It is only at the very last moments of this voyage, as Ellie makes her way down the aisle to her doomed marriage with the groom who has just easily and flawlessly flown in—the only character who has had an pleasant time in travel—that she takes yet one more detour, running off once again, this time into the arms of the man with whom she has already shared a life-transforming journey. In short, it is not the destination that either of them was really seeking, but the trip itself. In Capra’s unpredictable story, love does not, in fact, bloom in “one night,” but through many days and nights, through hunger, poverty, and exhaustion—through the “better and the worst” events of life.