the confessions
by Douglas Messerli


Raúl Ruiz’s stunning costume drama of Lisbon, Portugal in the late 19th century was first shown as a series of television dramas before being combined into a 4 ½ hour film in 2011. As one might expect for such a long work (although there is no feeling of lethargy in this rather exciting series of tales within tales), the movie begins quite slowly, almost in a kind of catatonic state; after the film’s ongoing narrator sets the situation, an elderly British woman is discovered to be drawing a young boy, who reads nearby as if he didn’t even notice her. The camera follows him into the hall of the church school, housing orphans, where once more, oblivious to his fellow classmates, the beautiful child, named only João (João Luis Arrais)—without a middle or last name, and rumored to be the son of the school’s priest, Father Dinis (Adriano Luz)—continues to read. A young bully pulls out of the group of boys, grabbing the book from João’s hands while insisting that even if his classmate seems different and special, he is, like them, only the son of a thief or horse trader. João responds in the only way he might, offering the bully the book but suggesting it might even teach him how to read. The incident seems to end, but a few seconds later a nun discovers João in the hall undergoing what appears to be an elliptic fit. 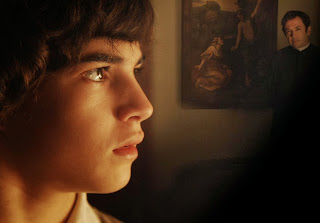 It is at this moment, in its fevered hallucinations depicting the child’s ill mind, that Ruiz’s brilliant film actually begins. And although the child’s mind ultimately stops its spin, the movie seldom does. Indeed, one might describe The Mysteries of Lisbon as a kind of hallucinatory fable in which ultimately it appears that all of Lisbon is interconnected to each other, as in tale after tale in the work devoted to storytelling, we discover its figures living lives that are nested together a bit like Russian dolls, each containing each.


João’s “fit” and illness after brings him a woman of the nobility, Ângela de Lima (Maria João Bastos), who gifts the child a toy box theater (that reiterates the film’s complex plot) and a portrait of himself, which reveals to the child that he does have visage beyond the one he has created in his active mind. The woman, so Father Dinis explains, is his mother, who married to a man other than his father, had to abandon the boy to protect his life. Although Father Dinis confesses this part of the story to the boy, throughout most of the rest of the film, he becomes, like Hitchcock’s famous character, “a man who knows too much,” having been the confessor of nearly everyone else in the complex grouping of characters. And little by little, first through the young boy’s search for his paternity, and later through the interrelationships of other adjacent characters, we grow to perceive the nearly impossible series of coincidences that life often is. 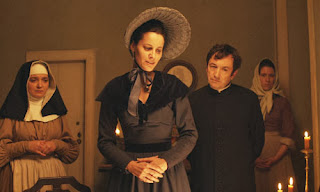 João (whose real turns out to be Pedro) is the offspring of another figure of the aristocracy, D. Pedro da Silva (João Baptista), who like Ângela, alas, is a second-born child, which means in this hide-bound world of traditions, that neither shall inherit any money, and that both, accordingly, must marry into wealth. The fact that they fall in love can only be perceived as an unfortunate tragedy that must be righted by their parents by marrying them off to others, and, when it is discovered that Ângela by da Silva is pregnant, the murder of her baby. Enter Father Dinis before his saintly avocation, a gypsy who convinces the would-be assassin, Alberto de Magalães, The Knife, to abandon his intentions by paying him a large sum of money. So does he take on the responsibility of the young boy, but, obviously, this is only the beginning!


If one were to recount all the dozens of miraculous—and yes, still hallucinatory, in Ruiz’s almost always surprising camera work—interrelationships I am sure it would sound much like a outsized soap opera. Indeed, it is, in terms of plot. But in terms of the fierce loves, hates, jealousies, gossip, treacheries, lies, and political machinations of the world in which these figures live, the inter-connected stories seem almost inevitable, as each tale swallows up the others, so that we lose track of the original figures only to have them reappear at unexpected moments, drawn back into the overall landscape as they age. In the process Father Dinis, also an orphan, discovers his own paternity, and the now older João-Pedro reencounters the man that might had taken his life at birth,  whom he challenges to a duel. Fortunately, the now dashing pirate Alberto (Ricardo Pereira), cannot shoot well (a fact which we long ago witnessed in his attempt to kill Pedro’s father years earlier), and settles the matter, somewhat comically, by himself confessing to the much younger man (who indirectly changed Alberto’s life) how he came to love and abandon the beautiful Elisa de Montfort (Clotilde Hesme) before marrying Eugénia, formerly the mistress of Ângela’s husband, the Count of Santa Bábara! You see what I mean? 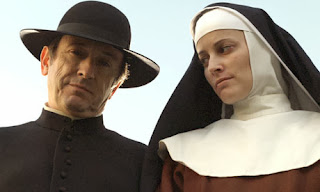 Ruiz, brilliant director that he is, does not at all attempt to maintain that these almost claustrophobic interrelationships are anything near realism. And besides, the figures themselves behave as if they were living in a grand theatrical work, women fainting on the spot for being called gossips, married women bawdily bedding any handsome man that comes their way. Men are killed and saved upon whims of fate and higher-ups. And children are tortured by the incompressibility of the world into which they have been born. The director maintains a Brechtian distance by simultaneously playing out these remarkable events in the child’s theater box. In fact, when he again returns us to the sick boy’s bed at the end of the film, we may even wonder whether the entire “mysteries” of Lisbon have been truly been an hallucination of the young boy, lost in the imaginary adventures of his beloved books.

Has the child not only recreated a slash-buckling past for himself, but a future that resolves all that he cannot currently comprehend? Does it matter? Did the world of Scheherazade have to be true to enchant her listener night after night?