the woman in the attic
by Douglas Messerli

The 19th century fiction about the unloved orphan, Jane Eyre (Joan Fontaine) who falls in love and is loved by her employer, Edward Rochester (Orson Welles), is so well known that it doesn’t need to be retold. Although Stevenson’s solid direction departs from the novel in a few places, it basically recreates the often menacing and forlorn world of its heroes, as they make their way through bleak worlds without love.
Jane’s Cinderalla-like existence is almost right out of Dickens, as she (played in her younger manifestation by Peggy Ann Garner) suffers under the cruel and selfish care of her aunt, Mrs. Reed (played with mischievous delight by Mercury Theatre regular Agnes Moorhead), and later suffers the tortures of Lowood Institution under the dictates of the mean-spirited Revered Brocklehurst (Henry Daniell). And two of the most memorable scenes in the film occur early in the girl’s history, one, as she enters the Institution only to immediately be branded as a liar and forced to stand in front of her peers upon a stool in punishment; the second as her childhood friend, Helen Burns (a very young Elizabeth Taylor) is forced by Mr. Brocklefhurst to shave off her beautifully curling locks and with Jane to march in circles in the pouring rain. That second incident results in Helen’s death and Jane’s determination to escape Lowood the moment she comes of age. 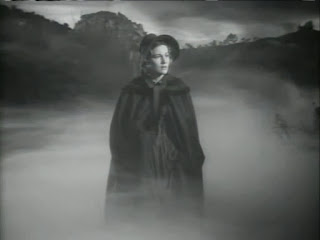 At first her relocation to Thornfield mansion to serve as governess for her master’s young daughter, Adele (Margaret O’Brien) seems almost paradisaical after the halls of Lowood. Certainly Jane’s young charge appears so lovely and charming that it is apparent she has lived in a world entirely the opposite of Jane. But soon the halls of Thornfield, despite the seemingly gentle ministrations of the housekeeper Mrs. Fairfax (Edith Barrett), also hint at unnamed horrors, if only because of strange noises in the night. And it is similarly during a walk one night that Jane encounters, quite dramatically, one of the most romantic outsiders in all of English fiction in the form of Rochester atop a stallion, both of whom are startled by the sudden appearance of the young woman. 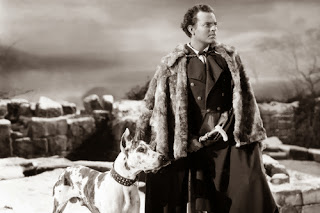 If the blustery and still dramatically handsome Orson Welles immediately consumes the attention of Stevenson’s camera, Joan Fontaine almost retreats from her character—as she had previously been forced to do in her roles in Rebecca and Suspicion—becoming more of an observer and questioner than a forceful figure in Rochester’s house. When Rochester brings in a whole caravan of wealthy and sophisticated guests, moreover, Jane shrinks into nonexistence, becoming ever more pained to hear from Mrs. Fairfax that the dashing man to whom she indebted to her survival may marry one of the well-dressed women, Blanche Ingram (Hillary Brooke). 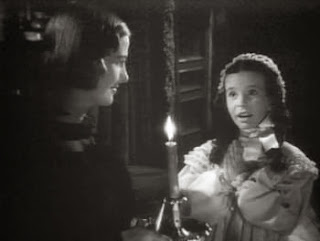 What’s more, Jane begins to perceive that something in this large house is terribly wrong, as she awakens, previous to the visitation of Rochester’s guests, to a screech of laughter, finding Rochester’s bed has been lit on fire. The destructive “other” woman (whom she believes to be Grace Poole) might almost remind one, in fact, of a mix of Rebecca (the former wife of Hitchcock’s melodrama) and the evil housekeeper of that work, Miss Danvers, who also sets the house afire. Other visitors to Rochester, such as a man named Mason, further convince Jane (and us) that something is strangely amiss in this house, which may also explain Rochester’s long absences. Mason’s visit also results in another attack by the strange woman in the closet, as Rochester leaves the governess to care for the bleeding visitor as he fetches a doctor.
Uncomprehending events and fearing for her own future, Jane finally comes somewhat into her own by confronting her employer with the question of her own future once he marries, only to suddenly discover that it is she whom he wants to marry, and soon after, facing the revelation that the woman in the attic, so to speak, is not Grace Poole but Rochester’s mad wife, Bertha, to whom he is still married. Despite her awful upbringing, Jane is still a moral (and perhaps bourgeois) being, who refuses Rochester’s offer for the two of them living unmarried abroad, and leaves the only real home she has ever had. 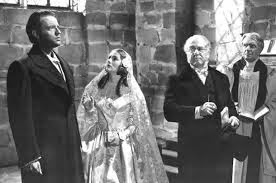 Only now can Jane have an opportunity to discover herself, as she returns to the home of hated childhood, discovering that her aunt has suffered a stroke after the suicide of her selfish son. For a while, it appears that like so many such figures, Jane might be confined to being a kind of saintly caregiver, as she looks after the formerly mean relative (the screenplay allowing her no opportunities for a better life that the novel offers in the later protection by her cousins). But when her aunt dies, Jane is finally freed to give in to her own Romantic fantasies, as she hears Rochester calling out to her in Welles’ booming baritone voice: “Jane, Jane, Jane.”
Taking up Rochester’s call, Jane returns to Thornfield with a resolute transformation of her character so complete, now faced with Thornfield’s destruction and Rochester’s blindness, that she finally perceives herself in a position that she has found not only someone who truly loves her but to whom she can minister, the art that she has been so dutifully taught throughout her life. And in that transformation, a true miracle seems to occur, as Rochester regains his sight enough to see their new-born baby.
Although we are told that Bertha, in her mad attack on her husband and house, jumped to her death, in a sense it does not matter that Rochester has finally been freed of his social and marital ties to the past, because Jane has herself finally abandoned the moral sanctimoniousness of the world that so abused her. Stevenson’s Jane (just as Brontë’s) finally is able to assert her being against a patriarchally-controlled and class-bound society which has previously contrived to nearly destroy her.