Of the three films Roberto Rossellini made with his wife Ingrid Bergman in the early 1950s, the last of them, Voyage to Italy (Viaggio in Italia) is usually described by his critics as his masterpiece.
Like the two works before it, it concerns a woman suddenly encountering, for better or worse, a new world, which will be a transforming experience for her and, presumably, the sensitive viewer. But here the transformation does not necessarily lead outward, particularly as it did in Europa ’51, but ends in a kind of resignation, in the status quo.
The English couple, Katherine (Ingrid Bergman) and Alex Joyce (George Sanders), have come to Italy to sell a small villa left them by her recently deceased Uncle Homer. The home, currently lived in by a happy couple, is absolutely stunning, and most of us would immediately be willing to exchange any British flat, no matter how commodious, for such a Neapolitan  treasure. But the Joyce’s are not a typical couple: Alex is an acerbic womanizer, who has journeyed to Italy unwillingly and can’t wait to escape what he perceives as a common place country and return to his British homeland. Critic Paul Thomas describes him, aptly, as “disillusioned, sour, and cynical.” Katherine, dispirited and almost always appearing slightly dyspeptic, if less abrasive, is nonetheless equally unhappy with life. Their voyage to Italy, we immediately realize, will also be a voyage within their selves—although it is also quite apparent that for Alex that will mean merely a kind of self-satisfied disdain for all else. One might argue that Alex, in his self-centered vision of the world, lives in a kind of perpetual stupor. As he himself proclaims, “One does sleep well in this country.”
Both agree that their being together in this “strange” land is the first time they’ve truly been spent time alone since their marriage, and for Katherine it provides insights into the man with whom she lives. Noting on evening out his deep engagement with another young woman, she notes: “How silly of me. I didn’t know you were interested in other women.” At another time, he observes of her: “Everything you do is utterly senseless.” So unhappy is this couple (and as Rossellini tells it, so was Sanders during the filming of this work) that we find it almost unbearable when they are together. Fortunately, Alex soon trots off to Capri—the most British and American spot in all of Italy—leaving Katherine on her own to explore various Neapolitan sites, as if her uncle were reaching out to tell her, like the ancient Homer, of another kind of voyage. 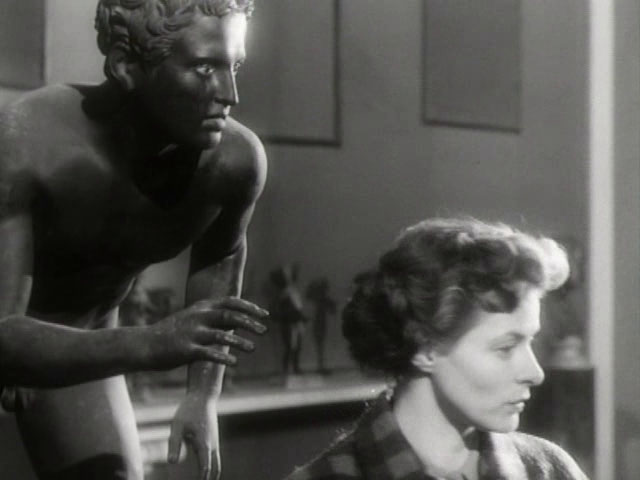 The large part of Rossellini’s film, accordingly, explores not only the inward dissolution of her marital commitment (Bergman and the director were simultaneously drifting apart in their own relationship at this time) but a kind of tour of the local region, including the National Archeological Museum, Cumoe, the cave of Sibyl, the lava fields near Vesuvius, and the ruins of Pompeii. But Rossellini’s camera, fortunately, transforms these tourist spots into psychological landscapes filled with the grandeur, the horror, and the simple wonderment of human life past and present. Katherine is not always overjoyed to witness what she is being shown, but through Bergman’s intense stares and facial reactions, we do see her discovering something internally. As Thomas puts it:

Life is taken as if by surprise. The camera tracks, pans, and
cranes, always beginning with what is being looked at and
always ending—without a cut—on Katherine’s facial expres-
sion.

When Alex diffidently returns after his stay in Capri, both agree that they should divorce. But almost at the moment they attempt to leave, they are trapped in the car by a funeral procession. Abandoning the car, they are surrounded by a swarm of humanity and temporarily separated. Katherine quickly becomes terrified, as if suddenly awakening to the fact that she too is not at home in this new world. At the same instant, however, we can only recognize that her sense of terror, along with many of the sites she has recently visited, has a great deal to do with the sudden realization of her own mortality. When the two meet up again within the swelling crowd, we see that he too has grown equally desperate, as each of them apologize to one another, clinging out of fear.

For me, this ending, so unexpected, left me feeling that Rossellini had failed in his vision in this film. It is as if he were willing an ending which we knew was improbable. How could the curious beauty remain with such an odious, self-centered man? Of course, we do not know what will happen, just as we do not know what did before they sudden arrival in Italy. Through Rossellini’s “temporary” ending, we perceive that the director is offering us perhaps a more honest vision than we might have wanted. Not all searches end in revelation or transformation. Some people simply cannot make such radical changes as did Irene in Europa ’51. Like the wandering couple of Antonioni’s later film, L’Avventura, what brings people together is not always abiding love. Sometimes, perhaps more often than we would like to believe, people simply need someone of their own kind to survive.
If I still prefer the transformative passion of his previous film, there is no question that in Voyage to Italy is has created something deeply troubling and profound.