will art survive?
by Douglas Messerli

Agnès Varda’s Cléo from 5 to 7 begins in color with a hand breaking a deck of Tarot cards, choosing several of them, and the cards being turned over by the fortune “reader.” Many of the events she describes in what she sees in the cards we will later find to be true: Cléo (Corinne Marchand), a beautiful young pop singer is loved by an older man who has helped her in her career, she will meet a talkative man, and she is faced with death. Whether or not she will survive that cancer, we never find out. The card reader is convinced she will die. 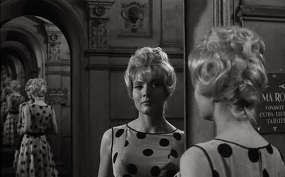 But Varda also makes clear in shooting that one scene in color that it is of our of “real” world, not the black and white fictional world of Cléo’s 1 ½  hours (the length of movie) between 5 and 6:30. Cléo and her housekeeper, Angèle (Dominique Davray) are superstitious, almost like children, refusing to take taxis with certain numbers upon them and to wear anything new on Tuesdays. Cléo, however, has deeper problems: she has just tested for stomach cancer and will be told the results that afternoon. Terrified by the idea, Cléo alternates between statements of angst, and a playful flirting with the men who pass her in the street and a more serious flirtation with herself in nearly mirror and windowpane she passes. To cheer herself up, she stops by a shop, joyfully trying on various hats before choosing a winter hat for this summer day. The lovely Cléo dressed in a a sophisticated polka dots ensemble and wig clearly is vain and self-centered. She talks only about herself, her budding career as a singer, the fact that her lover hardly ever sees her, and, of course, her fears of death. 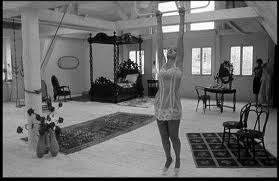 Played out in real time, Varda takes us for a joyful taxi ride through the streets of Paris before depositing Cléo in her spacious apartment, consisting of a swing, a chinning bar, a rocking chair, piano, and a large bed, the latter to which retreats as if it were a throne. Her elderly lover drops by, her lyricist and composer (performed by real composer Michel Legrand) sing and play several new songs from which she asked to choose, and Cléo herself sings a lovely lament before leaving the house in a tiff.
Back on the street, Cléo meets up with her artist modeling friend, Dorothée who, wither, watches a short silent film (with performances by figures such Jean-Luc Godard, Anna Karina, and Eddie Constantine), and takes a another wild ride through the streets before ending up at Parc Montsouris.
There Cléo meets her talkative young man, a French soldier (Antoine Bourseiller) who that very evening must return to his unit in Algeria. Only with this slightly pedantic stranger does Cléo finally stop talking about herself, perceiving the danger he is also facing. Without truly demanding anything from each other, the two finally communicate their fears and worries about life. Together they walk and take a bus to the hospital where Cléo is to hear her “verdict.” Suddenly, however, for the first time, she admits of feeling new hope. A moment later they briefly encounter her doctor who cruelly admits to her that she has cancer while assuring her that, after chemotherapy, she’ll be okay. The screen goes black at 6:30 instead of 7:00. 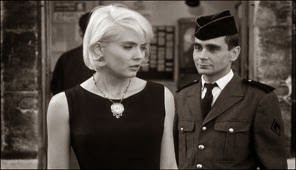 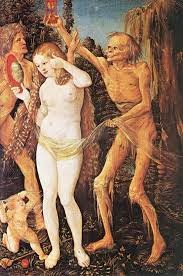 If this tale, in which we are reminded of the time as the action moves forward, seems frail, it is, in its frantic movement through space, a beautiful rush of images that seem, even today, as fresh and original as it must have felt in its 1962 premiere. Through snippets of overheard conversation, overlapping conversations, facial expressions, and the gentle dialogue between the film’s two central figures Varda makes us feel as if we were there, on the Paris streets, with her characters. And for that very reason we care for the woman with death following after. Perhaps her salvation, in fact, depends on that sensation of being just behind this awakening woman. As viewers of this all human-like figure aren’t we, after all, a bit like the artist Bladung Grien’s—whose paintings Varda notes, inspired this film—depiction of Death. Will this fictional being survive our judgment of her? Will we allow this shadow to come to life?
I’d suggest that Varda’s quick and dark blackout hints at her skepticism. But for those of us who perceive the fresh energy of this early New Wave work, Cléo, a kind of Orpheus, lives on in our memories long past the assigned deadline of the film’s title.