on thin ice
by Douglas Messerli

Eric Warren Singer and David O. Russell (screenplay), David O. Russell (director) American Hustle / 2013
David O. Russell’s 2013 film, American Hustle, concerns a fraudulent and demented vision of the American Dream that has long been a staple of American film and drama, from Eugene O’Neill’s The Iceman Cometh and Arthur Miller’s All My Sons to numerous of Edward Albee’s plays centered on characters who, through whatever means possible, are determined to reinvent themselves and financially “succeed.” In film, we perceive a more comic variation of this theme in Preston Sturges’ The Lady Eve, in which Barbara Stanwyck and her gambling father con a naïve Henry Fonda, she later transforming herself into a British heiress to get her revenge. 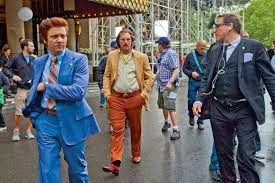 Two down-and-out losers, Irving Rosenfeld (Christian Bale)—a small-time con-artist and owner of several dry cleaners throughout New York—and Sydney Prosser (a stunningly beautiful Amy Adams)—a former stripper—meet at a Long Island party. Although neither is what one might describe as a good “catch”—Irving is overweight and already married and Sydney is a clever manipulator—they recognize themselves in one another and immediately fall in love. 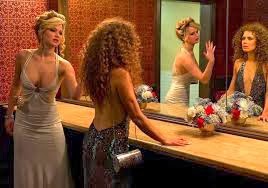 With Irving’s long experience with conning (he runs a small art-gallery featuring fakes out of his dry cleaning business, and takes others “to the cleaners” by offering them loans which are never paid out) and Sydney’s brains, good looks, and her suddenly acquired British accent (along with a new name, Lady Edith Greensly) the two quickly escalate their petty thievery into a thriving business. That is, until they are suddenly caught in the act by a rookie FBI agent, Richie DiMaso (Bradley Cooper), in the midst of the transaction.
Every one of the figures in this film of the late 1970s and early 1980s is obsessed with clothing (outrageously patterned and brightly colored or just as outrageously sexually revealing), hair, and makeup, as if the outside of their bodies might represent something that they knew they were not within.
Richie, like the other two, is also out to transform himself by rising up in the agency ranks. Accordingly, he offers freedom to the two in return for their help in a bigger con that might catch at least four bigger con-artists. At first the couple consider taking their money and running off. But one redeeming quality, his love of his wife’s young boy, puts a damper of that decision. And then there is the wife, herself a dangerous ditz who—with her alcohol-induced accidents, including a house fire and, later an explosion of a microwave—puts the boy’s life in danger. Although he has long begged her for divorce, Rosalyn (Jennifer Lawrence) is a passive-aggressive manic who cannot abide any change in her pampered life. 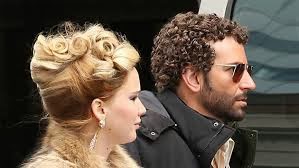 The success of Irving and Sydney’s past scams has depended on what Irving describes as “working from the legs up,” gradually reeling in their suckers, often by saying no, and keeping their robberies relatively below radar, mostly by asking only $5,000 to help people at the end their rope to open foreign accounts and obtain loans. Suddenly, working with Richie, the two quickly discover themselves out their league, so to speak, as the FBI agent keeps upping the ante by involving, at first, a fake Arab sheik and a local northern Jersey mayor, Carmine Polito (Jeremy Renner), who, hoping the sheik will invest in the Atlantic City casinos who will hire the people of his Camden to find jobs, is convinced, after original rejecting it, to the take the bribe. He promises, and we believe him, to make good use of the money. 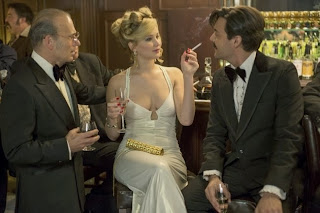 When it’s determined that the sheik must become an American citizen before he can invest in the casinos, Carmine suggests he might pull strings with several New Jersey congressmen and senators, and all hell breaks loose, as Richie, smelling success, now sees a way to entrap several even larger prey. Before these clever small-time con-artists even know it, they are involved with the mob, with their very lives at stake.
Beyond that, there are the FBI higher-ups, refusing at nearly every point, the tools of entrapment, from a suite at the Plaza, to a helicopter for the arrival of the fake sheik, to say nothing of the millions and millions of dollars used for the briberies. When major mafia mobster, Victor Tellegio (Robert De Niro) circles the hook, Richie nearly salivates, suddenly perceiving how he might make one of the biggest catches of all time! The small-time hustle, however, as Irving and Sydney perceive, has turned into an unmanageable fiasco. Both want out, but are no so intensely caught up in what later would be described as “ABSCAM,” that, for different reasons, they determine to go straight, beginning to rid themselves of all the lies and prevarications of their lives. Even more complexly, Sydney becomes sexually interested in “Richie,” while Irving bonds deeper and deeper with Carmine and his family.
Even more disastrously, Irving’s jealous and lonely wife Rosalyn falls in love with one of Tellegio’s men, spilling the beans about the impending FBI sting and almost assuring her husband’s murder—along with her own and her son’s. Indeed, things grow so out of control that Russell’s film reminds one, at moments, of a screwball comedy like Bringing up Baby—only, as we are told in the very early moments of the film, “Some of this actually did happen.”
Some of the logic and even relevance of the film’s scenes, just as in Russell’s previous film, Silver Lining Playbook, gets lost in the director’s clearly improvised antics of Jennifer Lawrence in the later part of the film. By film’s end the actress has taken her character so humorously over the top, there is hardly anything left of her stick-figure stereotype, as she drives off with her mobster lover into the Miami sunset.
Yet in the final twist of these American hustles, the director and screenwriter magically pull several more rabbits out of their hat that stave off mobster hits and release Irving and Sydney, and even commute Carmine’s prison sentence by spinning up a tale that takes Richie down again to the lowest peg on his office totem pole by implying that he either exhorted the missing 2 million dollars or was fooled by the con-men he employed to do the job.
Throughout the film, Richie’s disapproving boss, Stoddard Thorsen, attempts to use a private story to warn his young assistant of the dangers of his acts. Growing up in Duluth, Minneosta, Thorsen recalls, he, his brother, and father used to go ice fishing. On cold winter days they would dig a hole, drop a line, and wait in the cold air for a nibble. He remembers it as a beautiful event. But one October, after a brief frost, his brother wanted to go out fishing, and he had joined him, the father warning that it was not yet time, suggesting that the ice cover was still too thin. The first time he tries to tell this story, Richie interrupts him, suggesting he knows the moral of the story, that Thorsen fell in and nearly drowned. Thorsen denies that that was the story.
A second time Thorsen tries to tell the story he mentions that he and his brother were fishing, when they saw their father approaching them, he going out to meet his father before the elder discovered his brother fishing on the lake. Again Richie interrupts: “All right, so the brother fell in and died!” No, Thorsen again proclaims, that isn’t what happened. By brother died years later.
The running gag is not repeated, and we never do discover what the true story was meant to reveal. I’d suggest, however, that the third alternative, the father falling in and drowning, is, at least, what might have happened. Certainly, in the end, that is what happens to Richie, who, in his surety of righteousness himself suffers at least a symbolic death, a return to his miserable apartment where he lives with his mother, visited every day by a plain-looking mother-determined fiancée to whom he is unattached and of whose existence he cannot even admit. In a year in which so many major films—Dallas Buyer’s Club, Nebraska, Inside Llewyn Davis, Blue Jasmine, The Wolf of Wall Street, and Russell’s movie, to name only a few—feature characters who are failed and flawed, even despicable beings, the righteous, those who cannot see, as Sydney argues, that they too are lying to themselves, become, perhaps, the true villains.