Ernst Lubitsch | The Shop Around the Corner

Samson Raphaelson and Ben Hect (screenplay, based on the play Parfumerie by Miklós László), Ernst Lubitsch (director) The Shop Around the Corner / 1940

If there was ever example of what described as the “Lubitsch touch,” the magical ability to combine drama and gentle comedy, it is his 1940 film The Shop Around the Corner. Beginning with the rather ordinary comedy, Parfumerie, which I describe above, Lubitsch and his writers switched the location of a kind leather goods/gift shop, now called Matuschek’s, where the top salesman is Alfred Kralick (James Stewart), working under Hugo Matuschek (the wonderful Frank Morgan) and with several employees, Pirovitch, Vadas, Flora, Ilona and Pepi, portrayed by wonderful studio regulars such as Felix Bressart, Joseph Schildkraut, Sara Haden, Inez Courtney, and William Tracy.
To create dramatic intensity writers Raphaelson and Hecht unweave the two twines of plot, beginning the story—unlike in the original play—without Kralick’s love-hate interest, demonstrating that something is already amiss in the store through Matuschek’s sudden irritation with his senior employee before introducing Klara Novak (Margaret Sullivan), in search of a job.

Although the store has no current positions, she gets a job by selling a ludicrous cigarette box that plays “Ochi Chërnye” every time it’s opened, which Kralick had been against carrying in the store. Kralick, accordingly, is suddenly hit from two sides, with the slowly growing irritation by his boss and the boiling hostility of his new co-worker. 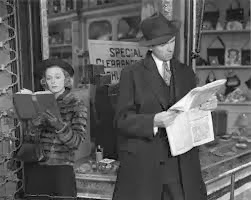 Again taking time with the plot, the writers focus on the snippy relationship of the two salespeople while gradually revealing the reasons for Matuschek’s growing anger. This allows time for great conversations between the kind and gentle Pirovitch (more mean-spirited in the original) and Kralick about the latter’s increasing love of an unseen pen pal. Although we certainly suspect that Klara and Kralick’s mysterious lover are one and the same, the film withholds that revelation as long as possible, the discovery revealed only to Kralick at the very moment he is fired, so that the one new dilemma of his life is counterbalanced with the astonishment of the new facts. 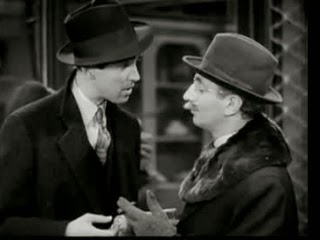 Behind Matuschek’s growing displeasure is his suspicion that his wife has been having an affair with his senior salesman. And when he discovers, through a private detective, that his wife’s lover is not Kralick but a fellow salesman, Vadas—who, it is made clear throughout, is a dislikeable being—Matuschek attempts suicide, but is saved by the errand-boy Pepi.
Here again, moreover, Lubitsch and his writers carefully balance this truly dark element with the necessary return of Kralick to the shop and the busy hustle and bustle of the Christmas season in which the play takes place. In short, every darker aspect of his tale is counterbalanced with a lighter, romantic or comedic event. So does Kralick’s return send Klara to bed with a fever, but now, received with worry and caring from her former nemesis, her illness again allows a gradual shift in their relations to take place, as the two grow warmer and warmer in their feelings for each other at the very moment when, on Christmas eve, the store racks up more sales than ever before. In a very capitalistic spirit, accordingly, romantic love is here equated with financial gain, just as previously a great deal of the discussion about marriage throughout concerns issues regarding whether or not Kralick can afford to get married. A Christmas bonus from now divorced Matuschek (in the original play he remains married), obviously, helps in that matter! And his now lonely position, as he heads off for dinner with the new errand boy, Rudy, is a bittersweet counterbalance for the joyous holiday all the others now face. 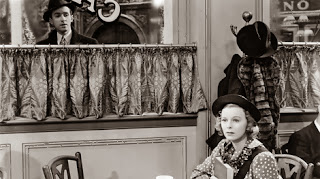 Everything is nearly perfect with this gentle comedy—except, strangely enough, for Stewart’s slightly boisterous acting. While the others, even the sometimes hammy Morgan, have toned down their American accents, suggesting—if not actually achieving—a somewhat old-world sensibility, Stewart whips through his performance with a “hee-haw-like” small town American accent that he would trot out again, more appropriately, six years later in his performance in It’s Wonderful Life.

The most troubling aspect of both play and film (and even the later musical) is that Kralich waits so long before revealing to Klara that he is her correspondent. But in the film, as well, Stewart’s portrayal of him, at times, seems similarly despicable, not only because of the lies he tells to Klara about meeting her pen pal, but in his reactions to and later firing of the piece’s villain, Vadas. Vadas may be a home wrecker and a rake, but he, in the end, far more charming than Kralick as played by Stewart throughout. Stewart’s rambunctious bellowing is matched only by the adenoidal whining of Pepi, the work’s singular comic figure. Only in the final moments of the movie, when quietly revealing that he is Klara’s secret lover, does Stewart redeem himself, playing a role closer to the love-stricken Scottie he would later play in Hitchcock’s masterpiece, Vertigo.
Otherwise, as I noted in the first paragraph of this short remembrance, The Shop Around the Corner is the embodiment of the director’s “magic touch.” We watch it every Christmas at our house.

Los Angeles, Christmas Eve, 2013
Posted by greenintegerblog at 11:33 AM