Billie Burke (story, based on the novel by Edna Ferber and the musical by Oscar Hammerstein II and Jerome Kern, with additional dialogue by Zoë Akins, and additional lyrics by P.G. Wodehouse), James Whale (director) Show Boat / 1936

Until yesterday, when I tuned in early in the morning to the Turner Classic Movie television cable, I had only seen George Sidney’s 1951 remake of Oscar Hammerstein’s and Jerome Kern’s classic Show Boat. While I have enjoyed the enthusiastic dancing of Marge and Gower Champion, the singing of Kathryn Grayson, Howard Keel, and William Warfield, and comic acting of Agnes Moorehead and Joe E. Bown, I had never known how far superior the 1936 version was. 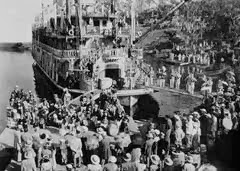 Certainly the earlier version was generally performed more in the style of a romantic operetta—the kind of musical productions, in fact, that Kern had primarily composed before this ground-breaking musical. James Whale’s film also unabashedly uses racial stereotypes in his numerous tableau of “happy dark folk,” and, at moments, he has no idea what to do with the camera during romantic duets, such as “Make Believe,” sung by warbling tenor Allan Jones (the tenor, you may remember, of A Night at the Opera) and a very young Irene Dunne. At moments stage actress Helen Westley (as Parthy Hawks) wavers between a bourgeois scold and a secretly bemused foil for the hammy acting of Charles Winninger’s Cap’n Andy. And Helen Morgan (as the mixed-raced Julie LaVerne) sings at the edge of bathos. Finally there’s the painful imitation of a “darky” cakewalk (as critic Daniel Eagan describes it) by Irene Dunne, who later appears suddenly in blackface. Equally embarrassing are the friezes of back-breaking Black labor Whale conjures up to support the lyrics of Paul Robeson’s “Ol’ Man River.” And the movie ends in one of the most sentimental love-hugs of all time, as a now elderly Magnolia kisses and makes up with her long-gone, gambling husband, Gaylord Ravenal. 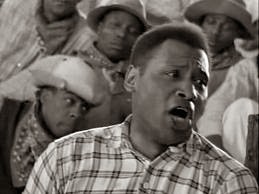 But then there is Robeson’s incredible voice and his unforgettable performance of “Ol’ Man River” and a new song written by Kern and Hammerstein, “Ah Stills Suits Me,” sung with veteran comic actress Queenie Smith. And while in the 1951 version, miscegenation and Black culture are mentioned, Black actors are nearly invisible. Here, at least, Whale employs whole choruses and populates the small towns along the Mississippi with Black citizens. Robeson, argues Egan, clearly knew that the cakewalk and blackface performances were a statement against prejudice rather than manifestations of it. 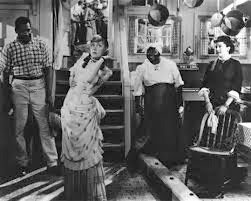 The character of Ravenal, moreover, is less a bad-boy matinee idol than a possibly dangerous force, who, Parthy discovers, has already killed a man. The scene in which, having left his wife, Ravenal visits his daughter in the vaulted halls of her convent school is particularly moving, and helps to redeem his rascality.
Although she somewhat overacts, Helen Morgan can still take her audience to the brink of tears in her beautiful renditions of “Can’t Help Lovin’ Dat Man” and “Bill.” We truly do feel the fatal inevitability of her love when she declaims “Fish gotta swim, birds gotta fly.” Whale cleverly pans away from the singer during the latter song, emphasizing the wonder of her voice through the absolute thrall of listening bartenders, dancers, and others. As in Frankenstein before it, Whale again proves his mastery of tableaux.
The plot of this version remains much truer to Edna Ferber’s original for good effect, allowing much more of the action to remain on the boat of the title and the shimmering river upon which it sits, before the film goes careening down the road of a theater bio of Magnolia and her daughter, Kim. One of the very best scenes, quite brilliantly dramatized, is the storm Whale whips on the night of Kim’s birth. 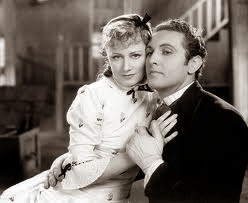 Earlier, Winninger’s one-man performance of a corny melodrama of the day is priceless. And for all of its old-time theatrics, Whale’s Show Boat seems more gritty and honest than Sidney’s spiffed up, lollipop-colored musicale. At moments, in fact, you really do feel you might actually be there, on the constantly moving Show Boat of the antebellum South.
Alas, the expenses of the film racked up by the director put Carl Laemmle, Jr. out of business, fired from the studio, Universal, which his father had founded. The film, however, was later added to The National Film Registry.